We take a closer look at the underrated Melon barb Maybe it’s time we stiffened our up our lips, swallowed our collective pride and admit that we were wrong about barbs. Nathan Hill suggests a species that could be the perfect ambassador to improve relations.

Walking under ladders, black cats crossing your path and barbs in community tanks: all things that many people go out of their way to avoid, but nobody stops to question why. For sure, some barbs once had a bad reputation — waspish and nippy, hungry for long fins — but it turns out that this was simply down to the way they were being kept. In small numbers and without the hierarchy of a shoal to occupy them, frustrations and confusion would occasionally manifest as a bitten tankmate. But this revelation came too late and the hysteria had taken hold. ‘Barbs bad’ the superstition went, and we’ve collectively clung to that ever since.

The tragedy of this is that for decades all of our community tanks have been slightly emptier for it. Many barbs are an ideal fit in the mixed aquarium, plugging the size gap that sits between small tetra and hulking centrepiece cichlids or gouramis. To ignore them is our loss.

We ignore one particular Indian gem — the Melon barb, Haludaria fasciata — at such considerable loss. Let’s start with the merits.

Right off the bat there’s this fish’s acceptance of a wide range of conditions. There’s nothing extreme about the Melon barbs, and they’ll be just as happy in a tank at 6.5pH as they are at 7.5pH. I’ve known them to be kept successfully at 7.8pH, and aquarium literature cites that they’ll happily go down to 6.0pH. Hardness is tolerated from a range as low as 2°H up to over 16°H. The sweet spot for temperature sits between 22°C and 26°C. I’d speculate that a good 75% of community tanks in the UK are sat firmly within these parameters. 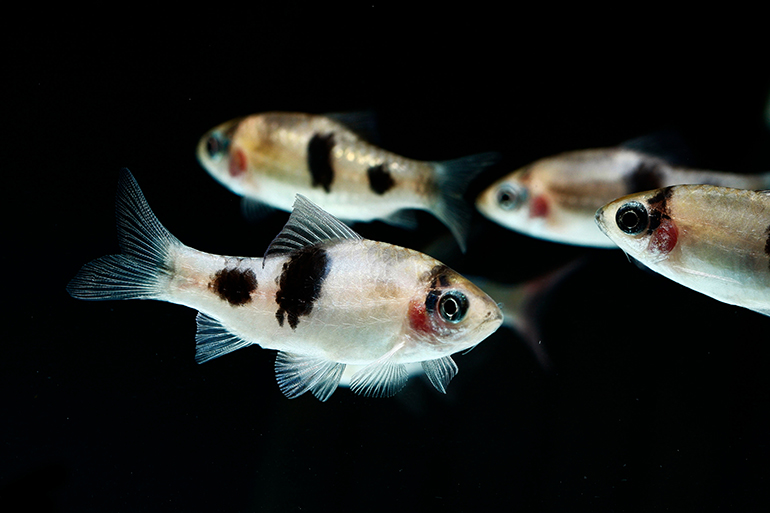 In stores, they can be washed out.

Next up, there’s temperament.

If the Melon barbs have a single attitude problem it’s that they get too confident. Not at first, I should add. On first introduction you’ll be cursing me for advising such washed out and terrified fish. But give them a couple of weeks, let them learn when the food comes, where the hiding places are. Let them familiarise themselves with the lack of natural predators. Then you’ll have a fish that beats everything to the flakes at feeding time. And the pellets. And the Daphnia.

Keep them with other confident feeders like rainbowfish. You can still have slower fish in the tank, but you just need to distract the barbs by feeding them at one end while you surreptitiously slip some morsels in at the other.

Size is a winner. Retailers and fish databases hint at the fish reaching some 6-7cm fully grown, but if the rumours are to be believed then fish of up to 15cm are possible. I’ve never seen one that big myself, but I’ve definitely seen them in private collections scraping closer to 10cm. Even at 6cm, there’s a certain mass to the Melon, which gives it greater presence than other fish the same length.

Then there’s the colour. Oh my days, the colour. There are a few populations of Melon barbs in the hobby and they subtly differ in markings and intensity. If your fish have originated from high altitudes, expect them to be distinctly peach.
If they’re from lower altitudes then you could be blessed with something with a purple, violet and red hue.

The number of black bars they display also varies pending location. Fish from the south of Kerala have three bars on their flanks, those from the north possess four, while those from Goa have an impressive five.
In a community tank sense, that’s not really too important to know, but if you’re ever aiming to breed them, make a strong note of that. Hybrids between the lines are pretty worthless and just dilute down the gene pools. And there is a chance they’ll breed in a tank.

You’ll need to work for those impressive colours, and no barb is going to flourish in some sparsely laid out tank with ‘that’ coloured gravel and the kind of decoration that could blind a person at fifty yards. Provide the best for your fish and they’ll reciprocate, giving you their best in return.

‘The best’ might be loosely translated as some approximation of their home habitat. Start with a decent sized tank, 120cm long. Next, you’re aiming to decorate it like it’s some Indian river or canal, with dark substrates (light sand like silver sand will rinse their colours out) and ideally a combo of sand (black quartz or JBL’s Sansibar dark will fit the bill) mixed in with river cobbles (I get mine by the sack from a garden centre, rinse them and keep them for when I need some).

Add some chunks of dark bogwood, but soak the worst of the acids out of it first — you want to avoid an extreme of low pH. A few fallen branches (try to get one with dried leaves still attached for optimal effect) and twigs, and then it just remains to add some plants. Plants aren’t essential, but the Melons will sure appreciate them. For a biotope feel, go with something like Blyxa, but if you aren’t so fussed then anything goes. Make it dense at the back and sides and you’ll corral the fish into the open viewing area at the front of the tank.

Or just add them to an existing 120cm community and up the general plant numbers. It wouldn’t hurt to mix in some dark substrate if yours is especially light.

The real rewards are destined for the savvy aquarist, however. Eschew the typical community fish and instead pair Melon barbs with a selection of loaches, for a high-energy ‘abrasive community’. Add some more midwater cyprinids like Filament barbs, Dawkinsia filamentosus, Giant danio, Devario malabaricus and Two-spot barbs, Pethia ticto, and you’ll have an enviable display of colours and movement, and not a shy fish in sight. Add a few flow pumps or a gyre at one end of the set-up and you’ll never want a standard community tank again.

Just wait until the male Melons start to vie for the attention of the females, too. You’ve never seen barb colours like barbs sparring for dominance and breeding privileges
in a tight hierarchy.

So, for all the good points, what’s the bad? The only one I can think of is the price, but frankly even this is a steal for what you’re getting. The typical Melon barb starts around £4 in the UK, and to keep them properly you want a shoal of some 8-10. But let’s be honest about this — that’s £40 for some of the brightest and most active barbs you’ll encounter. £40 will barely get you one of the ‘interesting’ suckermouth catfish, and all that’s going to do is bury itself face first in a cave and occasionally show you a hint of its behind.

I know where the smart money is.