Zebrasoma scopas is a trade oddity. Is it a species in its own right or colour morph of the Yellow tang? Dave Wolfenden searches for some answers.

The Scopas tang is a medium-sized sailfin of the genus Zebrasoma which also includes the Yellow tang (Z. flavescens). It’s found in the Indo-Pacific, from Japan to China and from East Africa to Polynesia.

In the wild Z. scopas grazes in relatively shallow sunlit regions of the reef, usually congregating in schools in the turbulent, oxygen-rich waters.

Growing to 20cm/8” in the aquarium and with a boisterous, territorial nature this fish demands room and a tank size of 400 l/88 gal is probably minimum for one.

Although Z. flavescens can be kept in shoals of around six, Z. scopas tends to be less tolerant of conspecifics and it’s not recommended to keep more than one in the same system, unless enough territory is available.

Mixing this species with others of the same genus can often be fraught and territorial disputes often break out, particularly if an individual has claimed its patch prior to subsequent tank mates arriving. Aggressive interactions can be fatal, thanks to razor-sharp scalpels on the caudal peduncle.

Although it has been suggested that adding specimens from the genus all at once can help reduce fighting this is not guaranteed.

As far as non-Zebrasoma tank mates are concerned, however, the Scopas tang is relatively peaceful and it rarely engages in aggressive encounters with them. Fighting is only likely when tank mates compete for the same resources and territories.

Provide it with ample rockwork to graze on, as this fish is ideal for the reef aquarium and tends to fare less well in a fish-only system.

Bright reef quality lighting helps encourage growth of the filamentous algae which forms the staple part of the Scopas diet and strong water movement is key. Not only does it replicate the high-energy environment in which the fish is adapted to swim, but maintains dissolved oxygen at the high levels necessary for successful maintenance.

Morphologically, Z. scopas has adapted to feed on filamentous algae using long, probing snouts, and they will also consume various species of macroalgae. It’s their ability to clear large amounts of filamentous algae that make them so useful in the reef aquarium. Given the opportunity, they will happily spend all day keeping your rockwork free of nuisance algae.

Provide a variety of foods and they can quickly adapt to a wide range. Flake foods are accepted, as is frozen fare such as Mysis, Artemia and bloodworm, and offer regular supplies of some of the algae-based feeds for surgeonfish and other herbivores. Sushi nori is highly recommended too.

They may occasionally pick at sessile invertebrates, probably as a result of hunger pangs, but ensuring a plentiful food supply can minimise this unwanted behaviour. Being herbivores these fish will be inclined to feed for most of the day, so the opportunities to do so should be replicated in captivity.

Part of the Scopas tang’s appeal is undoubtedly its huge degree of variation, but it’s also the source of considerable confusion when identifying specimens. Variants may be brown, black, green or grey, with some individuals exhibiting bizarre blotched patterns of more than one colour.

Many individuals can, over time, change colour once introduced into the aquarium, so that striking fish you’ve just purchased might not stay that way!

The exact taxonomic status of these mixed colour variants is far from clear, but some authorities suggest they may be hybrids between sympatric (living in the same region) individuals of Z. scopas and Z. flavescens.

The regular brown Scopas tangs cost upwards of £25, but unusual morphs such as the Tricolor tang tend fetch high prices. Expect to pay over £100 for a Tricolor, depending on its colour pattern.

Z. scopas indulges in spawning in pairs or groups in the wild and they have been seen releasing their gametes during a ritual which involves swimming towards the surface.

Occasional ‘sneaking’ or cuckoldry —whereby ‘satellite’ males rush in to fertilise eggs of an established pairing — has also been noted.

Following spawning, the resulting ‘acronurus’ larvae drift in the plankton for many weeks, and look very different to their parents. This larval form, unique to surgeonfish, was once believed to be of a different group altogether.

There have been no reliable reports of the Scopas tang being captive bred and the prospect of cultured Z. scopas remains elusive.

There also appears no evidence of sexual dichromatism and no difference in coloration between males and females, although there does appear some sexual dimorphism — varying physical traits between sexes. Specifically, males grow larger than females. 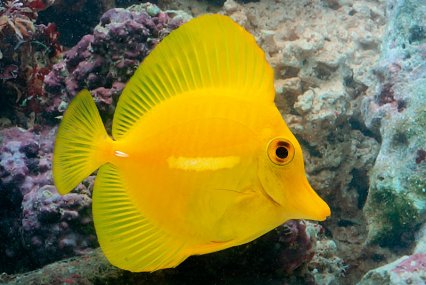 Is it a species?

There’s long been debate as to the exact taxonomic status of the Scopas tang. Some sources place it as a separate species, but others feel it’s merely a colour variant of the Yellow tang (Z. flavescens).

Researchers at the University of Guelph in Canada have used DNA ‘barcode’ techniques to establish the relationship between these ‘species’.

The results suggest that the two are virtually identical, with less than 0.3% genetic divergence — the rest of their DNA sequences being shared.

It appears that the Scopas tang may be at a point of evolutionary divergence from the Yellow tang (above). In other words, it is becoming a separate species but is related closely enough to interbreed with Z. flavescens. The jury still appears to be out… 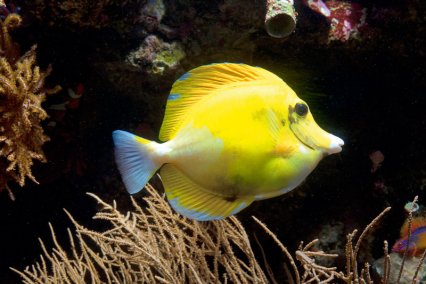 The above fish is believed to be an abberant morph of the Scopas, despite the yellow colour. 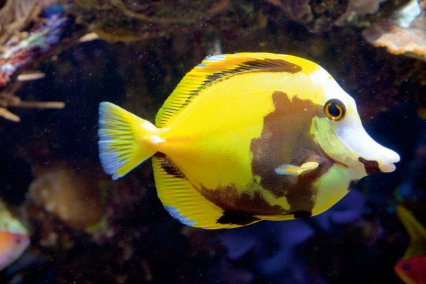 What to look for when buying…

Zebrasoma scopas are hardy fish, which, given optimal conditions, present few major problems in captivity. Specimens should be bright and alert in your dealer’s tanks, and should be seen actively searching for food.

Avoid any specimens that look emaciated as these are notoriously difficult, if not impossible, to adapt successfully to captive life.

Once in the aquarium, preferably following quarantine, they are, of course, subject to the usual ailments. Scopas respond well to common treatments for parasitic diseases such as Cryptocaryon and Amyloodinium.

They are susceptible to head and lateral line erosion (HLLE), which appears to have several causes, probably including poor water quality and dietary deficiencies. Ensuring optimal water conditions and a varied diet, using vitamin supplements, can help.

A study of specimens of Z. scopas collected from the Great Barrier Reef reveal that the tang’s intestines are home to a bustling community of protozoans. The microbial symbionts in the fish’s gut help process the algal diet of the tang, which is otherwise difficult to digest – hence the ‘partnership’ with symbiotic protozoans.