The Red-bellied piranha: What a spoilsport! Famed as a rapacious predator capable of rapidly stripping flesh from bone and a danger to any creature entering its waters the Red, or Red-bellied piranha (Pygocentrus nattereri, Kner 1858) is among the world’s most notorious freshwater fishes.

As a result, displays featuring this “bloodthirsty” animal are found in most public aquaria, and they have been part of many gruesome but fictional storylines.

Thankfully, informed captive maintenance of piranhas and their relatives has undergone a relative boom over the last 15 years and a number of websites and forums are dedicated to them.

Many different species are available, but the majority are wild caught, costly and therefore beyond the means of most hobbyists. P. nattereri is, however, farmed in numbers, with coin-sized juveniles sold rather cheaply for a fish requiring specialised and ultimately expensive care.

For the enthusiast it makes an excellent aquarium subject, but proper thought and research are essential prior to purchase.

Water quality and tank size are the two main considerations, but maintenance is otherwise quite simple. Adult size is 30-40cm/11.8-15.7” so even a single specimen will need plenty of room.

These fish will not ‘grow to the size of the tank’ but can become stunted or even deformed if cramped for too long. Moreover, juveniles are more cannibalistic than adults, so don’t raise them in confined spaces unless very well fed. A typical lifespan is 10-15 years, so you need to make considerable investment in time and space for them. 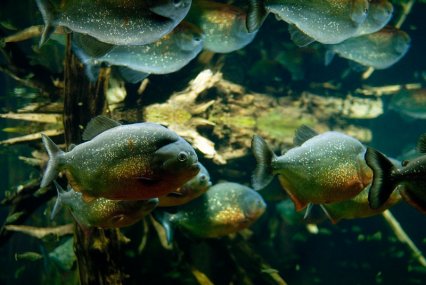 Piranhas typically produce much waste, so one or more over-sized external filters is essential. If possible, buy units with in-built heaters or at least fit a sturdy heater guard as adults have damaged submerged equipment.

Some hobbyists keep their piranhas in bare-bottomed tanks to be able to more easily syphon out uneaten food, but standard aquarium gravel or sand are both suitable substrates. Other décor is basically down to personal taste, but plants may be eaten, especially if the fish decide to spawn. Lighting is relatively unimportant.

It’s often said that wild piranhas hunt in voracious packs, but usually only juveniles group in numbers. Older fish exist in loose aggregations and form dominance hierarchies, so buy a single specimen or group of six-plus.

Piranhas are not exclusive carnivores, more accurately being described as opportunistic generalists. Their natural diet consists not only of live fishes but also aquatic invertebrates, insects, nuts, seeds and fruits.

Each jaw contains a single row of sharp, pointed, triangular teeth used like blades to puncture and tear, but equally to chop and crush. They also attack sick or dying fishes, feed on the fins of larger species and scavenge carcasses.

However, assaults on live animals entering the water are rare and mostly relate to accidental biting, or cases in which they’ve become trapped in small pools during dry periods — for example, when food is scarce and the piranhas are in unnaturally large numbers.

Such facts have mostly been ignored and while it’s true that big groups have been recorded to strip animals of flesh in minutes the true, less exciting, circumstances are normally omitted.

Feeding in the aquarium

There’s no need for live ‘feeder’ fishes in the aquarium. These not only introduce the risk of parasites and disease but are not particularly nutritious unless well fed and quarantined beforehand.

Animal meats such as chicken or beef heart contain excessive fat and protein, some of which the fish are unable to metabolise. 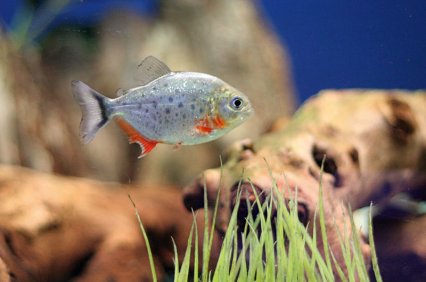 P. nattereri is easily bred and tank-raised youngsters, like the one shown above, are often available on eBay and other auction sites.

Sexual maturity is reached at around one year and at 10-15cm/4-6”. Unless you can find a sexed pair start with six or more and allow a pair or two to form naturally. In some cases spawning has been initiated by large, cool water changes, but in others it occurred naturally.

As males come into sexual condition they become isolated and excavate a patch of substrate using their mouth and caudal fin. Any plants may be cropped and the resultant nest is defended against other males.

Interested females respond by mouthing the substrate around the nest, and, when ready to spawn, both darken in body colour. Eggs and spawn are deposited in several batches and guarded by the male, sometimes assisted by the female. In the larger tanks multiple pairs may spawn simultaneously.

The eggs hatch in two to three days, with fry free swimming by the fifth.

At this point it’s best to syphon them into smaller 46-60cm/18-24” sponge-filtered tanks to prevent predation. Two to three meals of Artemia nauplii/microworm and water changes of about 10% volume are required daily.

The fry become increasingly cannibalistic, so should be moved to progressively larger tanks in batches of similar size.

Think carefully before taking on such a project, as you could end up with more than 1,000 young piranhas with little sell-on value.

Piranhas are an important food source for many human communities. They’re said to taste superb when grilled in a banana leaf and served with tomato salsa! 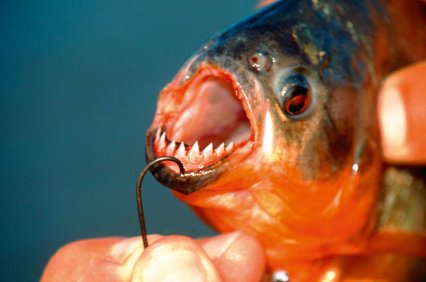 Blame it all on a stunt for the president...

According to Herbert Axelrod the flesh-eating myth began when the then American president Theodore Roosevelt visited Amazonian Brazil in 1913.

He was accompanied by several journalists and his Brazilian hosts organised several publicity stunts, one being that the president would ‘discover’ a river which would then be named after him.

A tributary of the Río Aripuanã previously known as the Río da Dúvida (River of Doubt) was chosen and is today still referred to as the Río Roosevelt or Río Teodoro.

When he arrived the Brazilian authorities had prepared a surprise. A stretch of several hundred yards had been netted off and for several weeks fishermen had been catching hundreds of adult piranhas and isolating them there.

They told the president that he and his entourage shouldn’t enter the water as they would be eaten alive by vicious fish.Naturally this news was met with scepticism, so a cow, quoted as being sick, old and in season, was introduced to the water. Some claimed its udders had been sliced open too.

This caused a feeding frenzy among the trapped, starving piranhas and newspapers were filled with stories of terrifying, flesh-eating fishes.

However, to this day, there’s still no record of wild piranhas killing a human…

Keep a single specimen in a bigger than 100l/22 gal tank and feed it pieces of raw fish, prawn, mussel, gut-loaded crickets and earthworms. 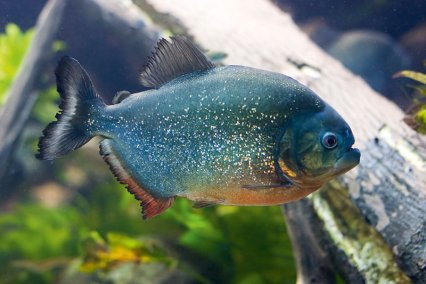 The name piranha is commonly applied to all members of the genera Pygocentrus, Serrasalmus, Pristobrycon, Pygopristis and Catoprion, but in truth is only applicable to the first.

Pygocentrus spp. are the fishes referred to as ‘piranha’ (caribe in Venezuela) in their countries of origin, with most of the others known as pirambeba. All are members of the family Serrasalmidae, a group currently comprising 16 genera, including other well-known ones like Metynnis, Myleus, Colossoma and Piaractus.

Their taxonomy is historically confused and continues to be revised, with Serrasalmus and Pristobrycon in particular presenting a number of identification problems. It’s beyond the scope of this article to discuss taxonomy in detail, but current knowledge suggests the existence of several clades (groups of closely-related genera) within the family, of which the ‘piranha clade’ contains all piranhas/pirambebas, plus the genus Metynnis (Ortí et al. 2008).

In terms of ‘true’ piranhas most modern enthusiasts continue to follow the nomenclatural system proposed by Fink (1993) in which only three species exist: Pygocentrus piraya (Cuvier, 1819), P. cariba (Humboldt, 1821) and

While the identities of the first two remain in little doubt, Fink was unable to accurately diagnose P. nattereri, and it remains uncertain whether the species represents a single evolutionary lineage.

There’s also the mysterious P. palometa, Valenciennes 1850, described from the Río Orinoco and still listed valid by some sources but generally regarded a nomen dubium (doubtful name) despite the occasional appearances on trade lists.

P. nattereri, however, was described from the Mato Grosso in Brazil but since been recorded throughout much of the Amazon basin (Brazil, Ecuador, Peru, Bolivia and questionably Colombia) as well as the Río Essequibo (Guyana and Venezuela), smaller, coastal drainages in north-east Brazil/the Guianas, plus further south in the Río Paraná (Brazil, Paraguay and Argentina) and Río Uruguay (Brazil, Uruguay and Argentina).

Colour and patterning vary considerably, depending on locality and even within a single location. Colour is also known to vary with habitat type.

Fish inhabiting blackwater environments tend to be darker with less red/orange than those from clear or white waters, although blackwater populations are apparently rare.

Morphology and patterning in adults can vary in head and body shape, presence or absence of dark spots or reticulated markings on flanks and in fin pigmentation.

Such differences have led to some populations being described as distinct species, notably P. altus, Gill, 1870, from the Upper Amazon and P. ternetzi, Steindachner, 1908, from the Río Paraguay.

Although piranhas are traded under both names, Fink studied more than 100 specimens from different parts of the Amazon and Río Paraguay drainages and could find no consistent characteristics that could be used to define them according to origin.

Having found all three species non-diagnosable he decided to synonymise P. altus and P. ternetzi with P. nattereri, as the latter is the oldest available name for the group.

Although he admitted it was an unsatisfactory option, Fink’s classification is still in place. In 1997 he observed differences in body form between ‘northern’ and ‘southern’ populations of P. nattereri, but was again unable to obtain sufficient evidence that they represent different species.

Analysis using samples from many different localities may help to resolve some confusion, but the huge scope of such a study is likely to be a limiting factor.

Dennis Day has maintained piranhas in aquaria for more than 25 years and is co-administrator of the UK Piranha Forum.

Would you recommend the Red-bellied species to piranha newcomers?

Pygocentrus nattereri is an ideal species to start off with.

Not until 20 weeks would I feed them on filleted fish, baby squid and raw prawns. I have never fed any of my fish with mammal meat.

At eight weeks you can get them on to pellet foods, such as Hikari Gold. Sinking pellet foods are not a good idea as they can get missed, trapped in décor and rot.

What are the chances of me getting bitten during any tank maintenance?

Virtually nil. You would have to be actively chasing the fish with your hand and trying to corner it before being attacked.

The only other way to get bitten is when netting the fish, placing your hand over the net or picking it up.

Given that the market is already flooded with them, what’s your opinion on  the number of hobbyists breeding P. nattereri?

It’s always worth breeding fish, whatever the numbers available in the shops, but breeding P. nattereri on a commercial basis is not a good idea, as the outlay far outweighs the income.