Rainbowfish are stunning, but many need too much space for the typical aquarist to house them. Gabor Horvath explores a diminutive species that’s easy to keep and breed.

I still remember the excitement I felt when I heard the news towards the end of the last century that a small bodied, yet extremely colourful rainbowfish had appeared on the market. Due to an absence of room back then for a proper sized tank I couldn’t keep any of the popular, larger rainbowfish species, but the arrival of the Dwarf Neon Rainbowfish, Melanotaenia praecox, meant that even I was able to accommodate a shoal and eventually managed to breed them.

Since its introduction, this fish has become a firm favourite of many, bringing the joy of rainbowfish-keeping to the masses. It’s hardy, adaptable and lively — even factoring in its susceptibility to bacterial infections and a tendency to develop ulcers — and because of this, the Dwarf Neon Rainbowfish was the uncontested ‘king’ of the small rainbows. Until recently, that is.

Some eight years ago an expedition to the Wapoga river system in Papua New Guinea found a new fish which was similar in appearance to the Dwarf Neon Rainbowfish, but sported bright red stripes. The species has been scientifically described as Melanotaenia rubrivittata and obtained the aquarium moniker of Wapoga Red Laser Rainbowfish.

Since its discovery this fish has been frequently bred in captivity, but it’s still not an everyday sight in stores. When I was offered a shoal of them, I couldn’t resist the temptation to keep this relative rarity.

As is common with most rainbowfish, the juveniles aren’t really showy, making it easy to overlook them in a shop tank. My own fish didn’t buck this trend: on arrival they looked washed out, pale with a greyish-brown hue. Only after flashing my pocket torch on them did they show some blueish sparkle. The only visible colour was the orange edge on the fins of the young males.

The problem with taking pictures was that they rarely stopped for more than a second or two, before darting away suddenly. As they grew I realised that each male had a favourite spot that they returned to after a few circuits around the tank. It allowed me to get ready for them and take a snapshot when they stopped at the ‘checkpoint’. I have seen similar behaviour in many other fast swimming species, so if you’re struggling to get a good picture of any of your fish watch their movements for a while and try to recognise the pattern. Then you will know where to take their pictures.

Waiting for the right moment will also allow you to observe some strange habits. In the case of the Red Laser Rainbows, I realised that they frequently ‘yawn’ while stretching their fins at the same time. This is a good sign that they feel safe and have settled in well. 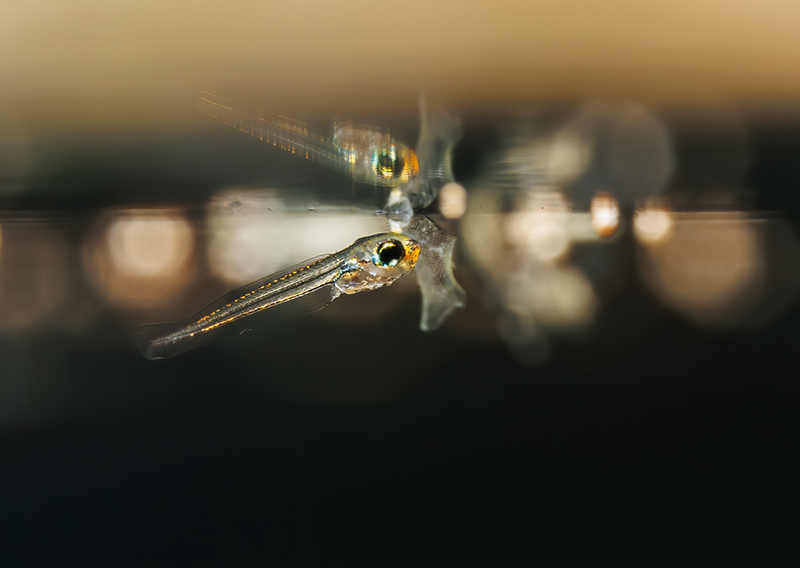 In a month or two the males began to chase both each other and the females. It wasn’t with murderous intent and they looked more like kids playing tag in an underwater schoolyard.

With time, the colours on the males intensified and whenever the overhead light caught them at the right angle, the dorsal parts of their bodies sparkled like the electric cable I accidentally drilled through recently. Even the colour was the same electric blue with a purple tinge.

The orange-red stripes became more prominent, too. The lower halves of their sides (as well as the upper parts when there was no bouncing light) remained purplish-grey. When a mature male gets excited a deep-blue stripe is displayed on its midline, which looks stunning with the orange framing.
At the same time a light brownish-orange stripe appears along the backline completing the picture.

The females aren’t so ornate, but they still look good with the neon-blue metallic flashes and the faint orange stripes. Females remain thicker with an elongated body shape, while the older males have a thinner, higher body. Having said that they will never become as rounded as M. praecox males.

When I saw the first signs of the mating behaviour — the male swimming around the females with outstretched fins and trying to guide her towards the selected spawning spot — I separated the females from the males to condition them independently. After two weeks on a rich diet of various insect meal-based commercial foods and a range of frozen fare (Bloodworm, Artemia, Daphnia and fish eggs) the females became plump with developing eggs.

It was time to set up a breeding tank. As rainbowfishes are fast swimmers and there’s some chasing involved in their courtship, a longer than usual spawning tank was used. At 50cm it still wasn’t exactly long, but the rainbows didn’t complain. At the two ends of the tank I added a few floating spawning mops long enough to reach the bottom, with about 5cm spare laying across the base. This simulates the roots of the overhanging and riparian vegetation that the wild fish use to lay their eggs onto in nature.

A mature sponge filter provided the filtration and a heater set to 26°C kept the right temperature needed for spawning. The tank was filled up with aged and pre-treated soft tapwater (pH7.2, GH4, KH1). As the filter was pre-matured in another aquarium I didn’t have to wait before introducing the breeding stock.