The Psychedelic mandarin: Far out, man! With a colour pattern like LSD-inspired wallpaper from the 1960s, the bizarre Psychedelic mandarin, Synchiropus picturatus, certainly stands out, says Dave Wolfenden.

The Psychedelic mandarin is certainly appropriately named! Sporting undoubtedly some of the most ‘far out’ coloration of any fish, this beautiful dragonet has instant appeal to any reefkeeper.

They’re not, however, suitable for every set-up and it can be a tricky species to maintain. So just what are the captive needs of this particularly bizarre beauty?

The Psychedelic mandarin hails from the Indo-Pacific, with most specimens available in the trade being imported from the Philippines. Growing to only around 7cm/2.8” in length, this member of the dragonet family Callionymidae is a shy benthic (bottom dwelling) species.

It has an underslung mouth, which is an adaptation to help its habit of ‘pecking’ on the reef’s substrate for food, and its eyes are set high on the head, allowing them to keep a constant lookout for potential predators.

As with all dragonets the fish is scaleless, although a thick layer of mucus, which may be toxic and/or unpalatable, protects the body.

They tend to inhabit shallow water on the reef, where they constantly graze the substrate for small invertebrates, movement being achieved in small jumping movements which are aided by the pectoral fins.

Choosing your fish
Selecting a specimen means choosing one with a plump, full-bodied appearance. Any thin or emaciated individuals will be stressed and not have been feeding post-capture, and should be given a miss as they are unlikely to adapt well to the aquarium environment.

Sadly, it’s far from uncommon to see such individuals at many dealers’ premises. If a specimen can be seen feeding in the holding tanks then so much the better. They should certainly be active and alert in terms of behaviour.

Due to their need for a constant supply of live food, many fishkeepers prefer to forgo the usual quarantine procedure (albeit occasionally employing brief dips or bath treatments), as the relatively clinical quarantine system simply cannot provide enough food to sustain them.

Of course, adding a newly-acquired specimen, even a seemingly healthy one, directly into the main system and omitting quarantine is a risk, but many feel this needs to be balanced against the risk of starvation and stress in quarantine. So this practice is something of a gamble, but the question is – do you feel lucky? 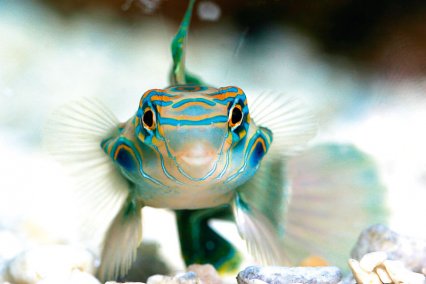 The right tank
Experience shows that, for the best chances of success, S. picturatus requires a surprising amount of space, preferably around 200 l/44 gal or more per individual!

However, it’s not just space that’s crucial, it’s also important that the environment is suitably aquascaped with live rock — not only to generate sufficient microfauna as food, but also to provide enough nooks and crannies and for the fish to explore and retreat into. A substrate of fine sand is ideal.

The right food
The feeding requirements of the Psychedelic mandarin, or any of the members of the Synchiropus genus for that matter, is the reason why many species meet a premature end in the aquarium.

Natural feeding habits entail constantly browsing the substrate for copepods and other small invertebrates, and this is where the problem lies in many systems; namely, providing foods of sufficient type and quantity. Although this mandarin may accept frozen fare such as Mysis, Artemia and other prepared foods, these simply won’t be adequate to sustain them. Flake foods, incidentally, are virtually always ignored. In the vast majority of cases, only live microfauna are nutritionally sufficient for their long-term needs and, without a constant source of this food, specimens become emaciated and rapidly decline

Therefore, a specimen should only be introduced into an established, mature aquarium set up to meet these needs. Such aquaria should be aquascaped with sufficient live rock to provide a large population of plankton.

Systems with an additional refugium are ideal, as these can help to generate suitable levels of food organisms. Some success has been reported by experienced fishkeepers in ‘weaning’ the fish onto enriched frozen feeds (such as Artemia and Mysis). This is usually in a separate system, ideally a quarantine set-up with moderate flow to keep the food moving, but this process demands a lot of dedication and patience on the part of the owner.

Being shy and retiring, the Psychedelic mandarin doesn’t fare well with large, predatory or boisterous fish, so they’re not suitable for the traditional large fish-only system.

Overly boisterous fish will intimidate this shy dragonet or out-compete it for food. Either that or they will directly attack it. 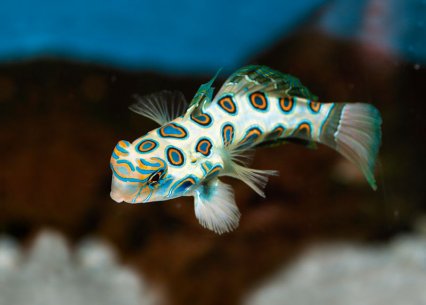 How to breed it
As with most members of the dragonet family, there are reliable external sexual differences between the sexes — this phenomenon being known in biology as sexual dimorphism.

Males have a longer first dorsal fin ray than females, with this elongated fin ray being used in both courtship displays and during aggressive rituals between rival conspecific males.

Males are extremely territorial and can become highly aggressive towards each other, and fights may break out if more than one male is kept in the same aquarium (except in very large systems), leading to stress, poor feeding and emaciation — and possible premature death.

It is possible, providing that the main system is large enough, to house a male with one or more females and it’s certainly feasible that courtship and mating may occur, having been observed in many aquaria.

Fertilisation is internal in dragonets, with the Psychedelic mandarin no exception, and the male and female swim upwards during darkness as these fish prefer to ‘do it with the lights off’. The fish swim in an upside-down U-shape with their ventral surfaces together and in some cases will repeat the process every few days.

The rapidly-developing eggs are tiny and are released into the water column for wide dispersal in the current. It’s certainly possible, provided that sufficient food in the form of rotifers and other suitably-sized organisms is available, that the life cycle of S. picturatus can be successfully closed in captivity.

So, if its requirements can be met, the Psychedelic mandarin can make a fantastic addition to the reef aquarium and it’s easy to see why they are such popular fish — from their stunning coloration to their easygoing nature and  ‘personality’ and downright cute appearance. Groovy baby!