The 'holy grail' of loaches? Emma Turner reports on the Chinese imperial flower loach â€“ a fish with undeniable beauty, a unique gargantuan size, and a price tag to match.

Origin: Native to the middle and upper reaches of the Yangtze River, China. Introduced to other regions in the country. Found in swiftly flowing waters.

Introduction: This is a very special member of the Cobitidae family of loaches, long revered as the ‘Holy Grail’ of loach keeping, due to its unique gargantuan size, undeniable beauty, and scarcity in the ornamental fish trade.

Sadly, it would seem that in recent times the larger breeding adults are not as commonly encountered in the wild as they once were. This is not due to exports for the aquatic trade, as these have always been few and far between, and of fish smaller than 15cm/6”.

Instead, this drop in numbers is due partly to overfishing for the food industry (although not fished for specifically, larger specimens are often a by-catch); and also from hydro-electric damming activity along the tributaries of the Yangtze River, which means the species can no longer migrate to its preferred spawning grounds.

Pollution also plays its part in some areas.

There are reports of captive breeding of L. elongata via hormone treatment, but this has not yet taken off on a large scale.

The Chinese government supposedly recognises that this is a species of special concern, yet they are not actively protecting it, and even now it is still waiting to be evaluated for IUCN red list status. This is despite catches and sightings being down some 80% on what they were 10 years ago with specimens over 25cm/10” now rarely encountered.

L. elongata needs aquaculture and dedicated aquarists to come to its aid, and fast.

There is no call to offer live fish as part of the diet as not only is it considered unethical, but it also brings with it the potential risk of disease being introduced to the aquarium, plus there’s often little nutritional value to be gained.

Be aware that L .elongata often shuns pellet/dried foods and will hold out for meatier fare. Feeding a diet that is rich in carotenoids (such as is found in many crustaceans) will help to intensify their beautiful colours. 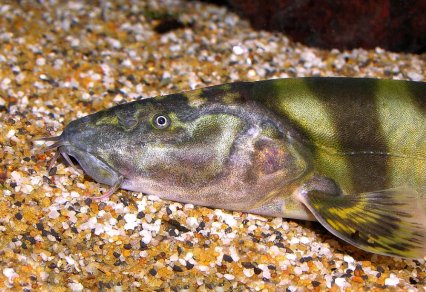 Aquarium conditions: These giants of the loach world require enormous tanks, with correspondingly powerful filtration to deal with the large amounts of nitrogenous wastes produced. A high level of oxygenation is absolutely essential; powerheads that create a vigorous stream effect are ideal, especially when angled slightly upwards to create a churning effect at the water’s surface.

Juveniles grow quickly and require enough space so as not to become stunted and later suffer health problems.

The fast-flowing subtropical waters in the native range of L. elongata are naturally hard and alkaline, with smooth water-worn gravel/pebbles as a substrate. There are significant seasonal fluctuations in temperature from around 5°C/41°F in winter to approximately 29°C/84°F in summer. But for best long-term care in the home aquarium, try to maintain 15-22°C/59-72°F.

Water with a pH 7.2-8.2 and GH 12-25° GH would be preferable. L. elongata does not appreciate bright lighting and should be kept under subdued illumination. Provide plenty of shady hiding places such as large PVC tubes, and caves built from smooth cobbles/small boulders/slate or sizeable pieces of driftwood, and here they will spend most of the day resting.

Crepuscular by nature (most active at dusk and dawn), L. elongata is a gregarious species that must be housed in groups, five fish being considered the absolute minimum in order that they may form a pecking order. Keeping a lone specimen would be considered cruel as these cobitids depend so much on company of their own kind, this behaviour often only truly appreciated when sizeable shoals are maintained together.

Choose any tankmates with much care, as although L. elongata is not an aggressive species, it is predatory and mature specimens will eat any fish small enough to be sucked into their capacious mouths.

Sexing: Unknown, although mature females are likely to be fuller bodied.

Identification: Elongate and compressed body, with a subinferior horseshoe shaped, thick-lipped mouth along with three pairs of sensory barbels. Eyes are small and scales minute. The dorsal fin is located in the posterior section of the body, and the caudal fin is deeply forked. Body colour varies from a golden yellow to light greyish-brown, with 5-8 bands/blotches of dark brown.

As the fish mature, the elongated, serpentine body shape develops into a much wider, stockier form. The background colour of the fish tends to become more gold and the caudal fin turns an intense red. Once the fish reaches 20cm/8” or so, the dark bars tend to ‘break up’, with the fish taking on a much more marbled appearance, these rosettes of colour leading to the common name of Imperial flower loach.

Notes: L. elongata was supposedly last imported into the UK some 15-20 years ago when wild populations were more stable. However, given the extremely likely longevity of this hefty cobitid under appropriate conditions, it is somewhat surprising that there are no reports of large adults still currently residing in home aquaria.

One school of thought is that most of the specimens that arrived during that time were not true juvenile L. elongata, but instead large adults of the similar-looking (but smaller growing) L. pellegrini. Both have been traded under the common name of 'Royal clown loach'.

Price: Expect to pay upwards of £175 each depending on size, bearing in mind that this species must be kept in good sized groups.