John Rundle answers some frequently asked questions on Guppies and explains why these popular livebearers have a special place in his heart.

Is the Guppy a good community aquarium fish?

The quick answer is yes. It will live with other fish, but be wary. Fishkeepers are told they can keep them with fish of their own size, but fancy males with their flowing tails can fall foul of faster fish such as tetras and barbs.

These will chase and nip those tails to shreds, possibly leading to secondary infections such as fungus. Females can also be stressed by them when giving birth in the community tank.

The only time I kept them in a community was when I had my first tank. Since then, when breeding, they were held in Guppy-only tanks, so I can’t recommend this as an ideal community tank fish.

What water conditions are best for them?

Guppies can be found in dealers’ tanks all over the country, indicating they can live in varying water parameters. However, other water conditions are more suited to ensure longevity and be better for breeding and rearing.

General quoted parameters are pH 7 to 8 and GH 12 to 18, indicating a water that’s neutral to slightly alkaline and moderately hard. In my area the water is very soft and pH varies between 6.5 to 7. I add Calcium Plus to help stabilise the water.

Can I breed Guppies in a community tank?

You can allow them to breed in a community tank, but that’s not the way to run a controlled programme. Any resulting fry also stand a high chance of being eaten by other fish. 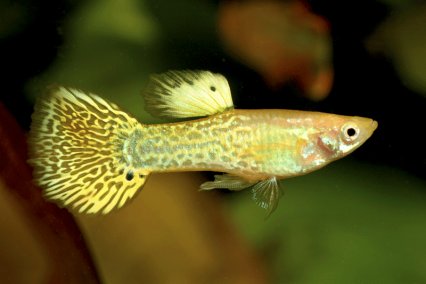 Where does the word Guppy come from?

The fish takes its name from Reverend Robert John Lechmere Guppy, a conchologist, geologist and clergyman who lived in Trinidad. In 1866 he sent a fish he collected there to Dr Albert Karl Ludwig Gotthiff Günter, an ichthyologist at the British Museum where the fish was given the name Girardinus guppii.

Although the Rev Guppy is often credited as being the first person to discover the fish, a Spaniard called De Filippi found it in Barbados in 1862, and, assuming it was a new genus and species, he named it Lebistes poeciliodes.

A German called Julius Gollmer then found Guppies in Venezuela in 1857 and 1858. They were sent to the Academy of Science in Berlin but were filed away and forgotten, so he could not claim to be the first to find them…

The Guppy has changed its name several times since and is now called Poecilia reticulata.

The Guppy is classed as ovoviviparous. What does this actually mean?

It means the eggs form inside the female without her providing any nourishment to the developing young. The embryos are sustained from their yolk sacs and once these are used up the eggs hatch inside the female. They will then swim as fully formed youngsters.

What’s the name of the modified fin on the male that’s used for mating?

Called the gonopodium, it forms a true copulatory organ and its structure varies considerably in different livebearer families. In the family Poeciliidae it’s an elongated bony structure. The third, fourth and fifth rays taper and at the end it has a hook-like appendage (see picture below). 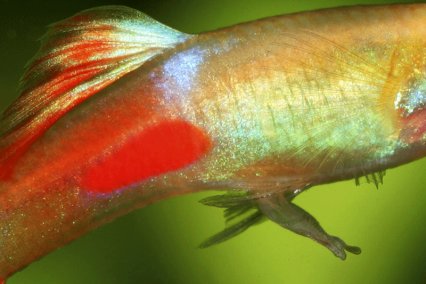 How can the Guppy, over time, produce more than one brood of young after just a single mating?

When tetras and barbs spawn, the males release sperm into the water to fertilise eggs released externally by females.

The males of our livebearers use a different method. When he is in position beside the female the couple briefly make contact. He then passes ‘packets’ of sperm (spermatozeugmata) that travel along the gonopodium and enter the female’s urogentital pore.

Once inside the female the spermatozeugmata break up and release thousands of separates sperms. From this one fertilisation she can store this sperm, enabling her to produce several broods of fry over a long period. This ability to store and produce several broods from just one fertilisation raises the question: what’s the time lapse between each one?

Within four to five days of the eggs being fertilised the embryo is almost completely formed and the organs develop during the rest of the gestation.

This will mean that further broods created from the same fertilisation would be born about every 25 days.

Is the Guppy easy to breed?

That Guppies are easy to breed is a myth. Why? Let’s start in the shops. It’s possible to go to any retailer and see tanks of highly coloured cultivated Guppies  — with males looking all the same.

After selecting a male and female from another tank the hopeful fishkeeper takes them home to breed, only to wonder some time later why the resulting youngsters look nothing like their parents.

It is easy to produce large numbers of Guppies, and this is why it’s also called the 'Millions fish', but to obtain quality every time requires time and effort. To constantly raise fish of the same colour and type is hard work and requires at least basic knowledge of selective breeding methods and perhaps simple genetics. 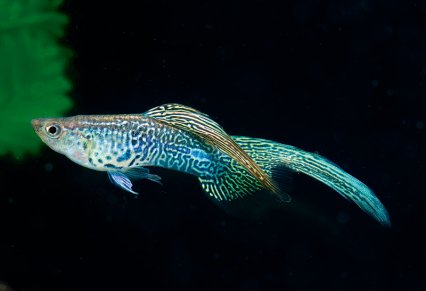 Get stock from an expert breeder who has an established line from which the history of parentage can be traced. This way many problems can be greatly reduced.

However, stock from a retailer will generally have been bred on fish farms in South-East Asia or from Sri Lanka. While most farm-breds may be healthy and make good aquarium fish it’s impossible to trace parentage and get a true pair.

While males come in individual colour and fin varieties, females don’t. They are usually seen in tanks of mixed colour varieties, making matches to males well nigh on impossible.

So how can you obtain the required breeding stock in this situation? I tend to miss out males and buy three good gravid females, meaning they are already mated and carrying. I wouldn’t know the colour or fin shape of the father, but this allows me to plan and start a breeding project from scratch.

How would you go about starting such a project?

I will have already planned ahead allowing the females to drop their broods in separate tanks, then pick one brood and work with it, using a selective breeding method to produce further broods.

Without this it’s possible to lose all selected colours within a few broods and revert to the duller, wild colours. Hopefully I’ll end up with some quality guppies. This plan could go wrong right at the start, though, and my chosen brood could be rubbish.

There are also expert breeder methods which could involve feeding 12 times a day. I could not maintain this, but could feed more often than normally with the likes of tetras.

With this nigh on constant feeding the breeders carry out regular water changes.

Breeders start to sex the guppies at three weeks, as it’s important to sex as early as possible. The breeders are also firm over culling broods to eliminate runts and deformed fish. 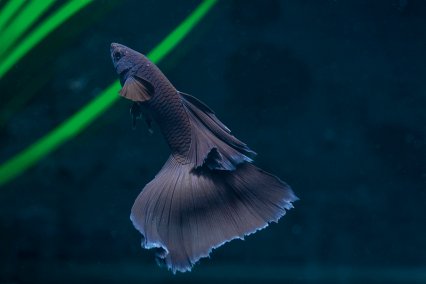 What tank set-up would you use for the project?

Breeding cannot be carried out in one single aquarium. All set-ups should be based on the bare tank method, being plant free and have no gravel substrate. I do, however, have Java moss and Java fern on the base of the bare stock tanks and growing on tanks.

The breeding tanks are where pairs are placed to mate and females are left to release their broods. The growing on tanks hold young waiting to be sexed and then hold the separated sexes.

Would you use breeding traps to help matters along?

No way would I use the small plastic traps as sold in shops to hold gravid livebearer females! They can stress any fish unluckily confined in such spaces.

Allow the female to release her brood in the tank with just a good cover of plants like Java moss and Java fern. Yet even using this method can lose you some fry, to be eaten by the mother.

I use home-made large breeding traps which give the female a large swimming space. 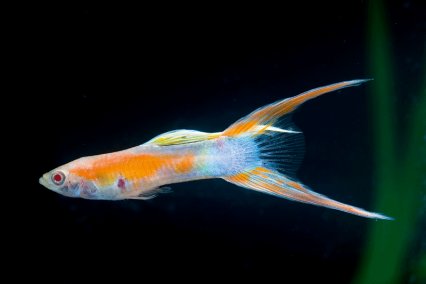 What breeding methods are there and which did you use?

When breeding livebearers like the Guppy, breeders generally use two methods. Whatever one you use the key consideration is selection. All the way through the programme use only the best fish and those that are showing the traits you require.

The inbreeding method is based on breeding closely related fish, such as brother to sister.

That inbreeding can cause malformation and degeneration has been much discussed, but any problems are often caused by poor selection. It’s down to the breeder to exclude all less than perfect fish.

Linebreeding is a form of inbreeding, but consists of running two or more lines of the same type of fish. This method will require using more tanks than the inbreeding method.

Is it part of your breeding practice to cull the broods?

Yes. Culling can be defined as the selection of animals according to the quality desired.

It’s important to continually cull each brood at each stage of the breeding project and you have to be utterly ruthless in picking out all the fish deformed or showing bent fins and disposing of them as soon as possible.

Others that have become healthy, but not of the colour or fin shape you want, could be moved on to your friends...

Only raise the number of fish you have room for – it’s far better to raise 50 good quality fish than finish up with 200 runts.

Within periods of 25 days the female Guppy can produce further broods. It will probably be impossible to raise all of them, so it is imperative to stick to strict breeding methods.

Progress of my own project

I decided to use a basic inbreeding method as I could not offer the extra tanks needed to run two lines of fish.

I placed one of the gravid females in a large breeding trap in a 46cm/18” tank to release her brood. When this happened I removed her and left in some 50 young fish, as I intended to work with these.

Males and females were placed in separate tanks. As they grew I removed all I didn’t want — giving them to members at my fish club. I was left with males with orange/red tails and virgin females like their mother.

I could now start. I had read that four to five months old was a good age for Guppies to breed so waited until then before I put a pair together.

When breeding fancy livebearers only one trait can be worked at any one time: colour, tail shape or size. I was going for colour.

I selected the best male and female and placed them together in a 46cm/18” breeding tank. When gravid she was moved to a breeding trap. The male was kept separate in case I needed to use him to back cross later on.

The female was removed when she produced, being placed with other females in case I wanted any of the other broods she could produce from the mating.

Again the young fish were sexed at three to four weeks and separated. From these I took the best male and female (brother and sister) showing the colours I wanted and put them together to breed. Then I went to the second step and started the cycle again.

When you find a good male you can breed him with his mother, or even daughter,  to help improve an inbred line.

With careful selection of breeding pairs the quality of the fish in this cycle can be maintained for a few years.