Matt Clarke on a new oddball that's recently surfaced in imports to the UK.

Common name: Glass eel, Mini moray or Snake eel
Scientific name: Pisodonophis boro
Size: Up to 100cm/39", but probably a little smaller in captivity. Those we've seen on sale are under 15cm/6", so are still babies.
Habitat: This is a euryhaline fish (capable of withstanding a wide range of salinities) and is found
in marine, brackish and, during the breeding season, freshwater environments such as flooded fields. According to Rainboth's Fishes of the Cambodian Mekong (1996), it lives in holes in the river bank and among rocks on the bed.
Origin: Widespread through the Indo-West Pacific ocean from East and South Africa to eastern India, Polynesia and Sri Lanka.
Water: Specimens on sale here are kept in freshwater, but for long-term care, the addition of some salt would probably not go amiss. 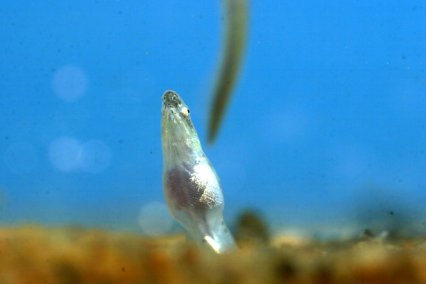 Diet: A nocturnal piscivore. Stomach content analyses show that it also feeds on crabs, such as Uca annulipes, as well as fish. Small specimens will take wormy live foods, larger ones are likely to polish off other fish at night...
Availability: A popular food fish which is sold alive and wriggling on market stalls. Some of the importers we spoke to hadn't seen it on their fish availability lists. These were seen at Ashford Aquatics in Middlesex.
Aquarium: A large tank, well over 150cm/5', is needed for an adult. Provide plenty of hiding places and don't add any fish small enough to be considered food. Use a soft, sandy substrate to allow them to burrow.
Notes: Best avoided unless you're an experienced oddball keeper.
Rarity rating: These are probably a first for the UK.
Price: Since these are food fish they should be cheap. You could pay anything from a couple of quid up.

This item is from the Practical Fishkeeping archives and was first published in 2006.