The Fugitive: The Blue-eyed panaque Caught in the crossfire of drugs and revolution, the Blue eye panaque is a rare Colombian export. Nathan Hill explains why it's worth celebrating when some make it to freedomâ€¦

If you’ve been keeping fish for less than ten years it’s unlikely that you’ve ever seen a true Blue-eyed panaque in the flesh.

The tragedy in that is that they’re beautiful. The young have simple yet outstanding colour schemes, while adults, though more bland, are like a quality whisky – you admire and respect them more with every sampling.

Two ‘possible’ species are described as a Blue eyed panaque. The first, and possibly original recognised variety, is Panaque suttonorum, also known as the Lake Maracaibo Blue eye from Venezuela.

The other, Panaque cochliodon, or the Rio Magdalena Blue eye, is considered Colombian — although they are also found to cross over into the same habitat as P. suttonorum.

If trying to remember when we’d have last seen these fish, then likely they’d have gone under Panaque suttoni — now a defunct moniker.

In the mid to late 1980s, P. suttonorum were regular sights in home and retail tanks — one even appearing in the film ‘A Fish Called Wanda’. Through the 1990s they commanded increasing
prices and became scarcer.

Then seemingly overnight, close to the millenium, they practically disappeared off the radar.

Only now are a few trickling back in to the system and those tend to command maybe up to £1,000 a fish!

P. cochliodon wasn’t affected as much, although wasn’t overly abundant in the first place. This species asks a much lower price than P. suttonorum, although unscrupulous retailers will sometimes try to palm one off as the original and more expensive Blue eye.

So where did they all go? There are a few schools of thought. Retailers and importers all seem to have their own pet theories and some have ossified into perpetual myths.

PFK contributor Heiko Bleher offers a fascinating insight into what could have happened to the imports of P. suttonorum, as part of a tale of nefarious deeds undertaken by an infuriated parent.

The story goes that a billionaire businessman and his daughter were in the region where P. suttonorum inhabit when she was stung by a ray while in the waters.

Vengeful poison
The man was so enraged that he flew back to the US where he paid for the development of a poison to kill the fish that harmed his child. Returning to Venezuela, he administered it to the Magdalena river.

Unfortunately for the suttonorum, it was at the spot where they were endemic and caused ecological murder on an unprecedented scale. No attempt had been made to stop the poisoner!

Heiko has subsequently returned to P. suttonorum’s native ranges and has yet to find a single species in this original habitat. He found some at the mouth of the Rio Cauca, but of a variation and not true to the original Blue eye. 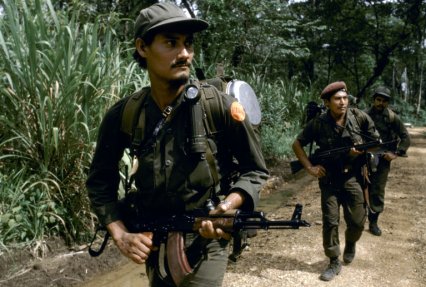 Warring factions
There’s another good reason why the Colombian species are so hard to get — they’re in a war zone.

Colombia has a history of revolutionary groups, especially the FARC-EP, or Revolutionary Armed Forces of Colombia. This chiefly peasant group has for some time controlled large swathes of the country.

Combined with smaller revolutionary factions, and even the activities of drug traffickers and producers, many regions are pretty much under their control.

The influence of these groups expands to neighbouring countries, like Venezuela.

The sudden disappearance of the Blue eyes coincides with several key pushes by revolutionary groups.

In 1996 and 1998, co-ordinated rebel attacks killed dozens of Colombian military personnel and a Colombian counter-guerilla battalion was decimated in the conflicts.

It was therefore crystal clear that some regions of the country should not be visited by any typical, pro-government, capitalist citizens. By 2005, FARC alone had kidnapped some 2,500 people and two years ago 280 were snatched.

For the collector wishing to visit peasant fishermen with their troughs of exotic loricariids times suddenly became dangerous and the sensible exporter would have cut their ranges to account for these now inaccessible regions — including those of these catfish. 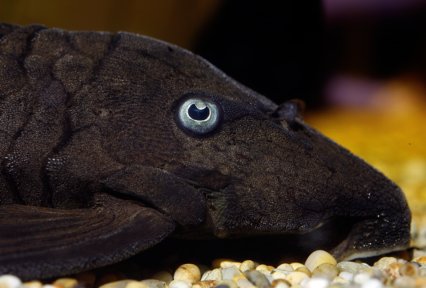 Oily end?
Lake Maracaibo and its surrounding area in Venezuela is rich in natural oil which is drilled and extracted for lucrative refinement.

However, as the recent events of the Gulf of Mexico taught us, where there’s water and an oil rig there’s a hazard waiting to happen — and South America is no exception.

Some spillage has been historically blamed on the deliberate dumping of oil by guerillas, but that’s not entirely fair. Even by modern reckoning irresponsible drilling is taking place and, as of 2010, of the 13,000 square kilometres of surface of the lake, 1,000 square kilometres was covered in oil.

Given that such spillages are not new and that nobody seems prepared to admit responsibility for leaks when they occur, the P. suttonorum habitat would appear to be under persistent threat.

Hidden diseases
From 1989 onwards, reports of a disease started to emanate from South America.

Initially an illness that affected the salmon family of fishes, Pisciricksettia was a nasty strain of bacteria that caused huge economic losses for Chile’s salmon industry.

The disease managed to make the species jump from salmonids and is now reported on a wider range of fish.

Early on, the disease was being found in P. suttonorum and rumours abounded that the government not only covered up the infections and subsequent mortality but managed to make the problem worse through poor environmental management and disease control.

However, It could be as simple a point that the disease found a fish with no immunity and made short work of the Blue eyes.

Bad management?
There are other potential problems. Human and development encroaches on the territories of these fish,
and agriculture have played their savage part.

It’s hard to say what impact occurs in regions controlled by drug-related activities.

Some insist that such activity is beneficial, as it stops the progress of industrial development. Others claim that the hack and slash methods of deforestation to grow narcotics is as damaging as anything the mainstream world can inflict.

Always in demand
Whatever the reason for the disappearance of the Blue eyes from the trade, they will continue to be coveted whenever they appear.

We can only hope that somebody, somewhere, finds a way to breed these beautiful plecs. It’s unlikely that their price will drop in our lifetime, but as long as they drip their way into stores they’ll always find an eager audience.