Jeremy Gay discovers a tank-bred version of this stunning catfish.

Common name: Synodontis granulosus. The genus Synodontis has gone through a recent gender change — meaning that synos with names ending in 'us', now end in 'a'.

Tank size: 150 x 60 x 60cm/5 x 2 x 2’ for one and much larger for a group, and group members are said to be aggressive toward each other when adult. Logically, house this fish in a large Lake Tanganyika biotope aquarium, although it will predate cichlid fry at night. 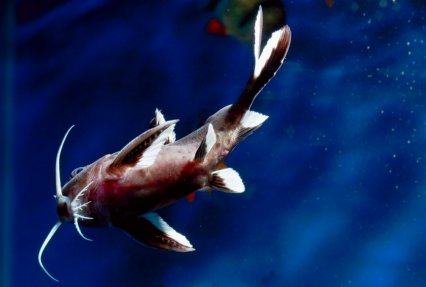 Notes: This Synodontis catfish has been a legend for many years, reaching us through only one known wholesale supplier.

Ten years ago prices ranged from £450-£650 for a single, wild-caught specimen and only diehard collectors would pay! Then came an influx of juvenile 'granulosus' from another wholesaler, causing prices to dip to just £30 per fish.

However, these weren’t true granulosus, being at best hybrids of true species and a similar species and at worst a hybrid between two different species.

Because so few have been around, proper ID has been difficult, especially with juveniles, but you’ll know when you see a true granulosa as it has angular fins with white margins, white whiskers and a body that in the right light (or dark!) is black.

The specimen pictured was one of several in stock at Trimar Aquaria and Reptiles, Cornwall, bought as tank-bred Synodontis granulosa from wholesaler Neil Hardy Aquatica, the original importer of the true species.

From what we gather they are bred using hormone injections by breeders in the Czech Republic. Rightly or wrongly Czechoslovakia is also where many syno hybrids have been created, though how breeders can cross a hardwater, cuckoo Synodontis multipunctata with a softwater, egg scattering Synodontis ocellifer I’ll never know.

Either way I guess that similar techniques have been used to breed the true granulosa and it makes financial sense to breed these true, as then you can ask more money for them.

Sexing: You can sex Synodontis by examining their bits. The genital papilla on males is well developed and pointed, while the females have only a lightly raised, rounded protrusion.

In most species females will normally be larger and fuller bodied to hold all those eggs. Depending on species, these may range from less than hundreds to hundreds of thousands.

Availability: I’ve probably seen five true, wild, granulosa across the length and breath of this country in the past ten years.

Only recently did we see true tank-bred granulosa and that was on the Neil Hardy trade stand at Aqua Telford 2011 — then subsequently on sale at Trimar in November 2011.