What types of new loach are appearing and are they becoming readily available in the hobby?

However, genetic test results indicate that Balitorid and Nemacheilid loaches did not evolve from the same common ancestor and should be considered separately.

Schistura is the most diverse genus within the Nemacheilidae, consisting of almost 190 species of which over 100 have been described since 1990. This figure is set to grow further as there remain numerous undescribed fish - of which one particularly stunning example became widely available in 2006.

Sometimes referred to as Schistura cf. balteata, because of a superficial resemblance to that species, it is most often sold under the name ‘Sumo loach’ — note its ‘wide head’ appearance.

However, this is the same name as used for the real S. balteata, so many dealers now refer to it simply as ‘Sumo II’. Other trade names for it include ‘Tri-band sumo loach’ and ‘Chubby loach’. 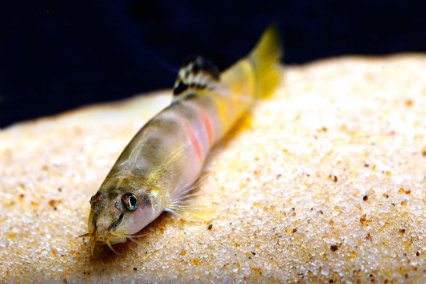 So the Sumo loaches are big news. What’s their habitat and how can I keep some?

It is among the most colourful members of the genus and is easy to keep, provided its environmental requirements can be catered for. It inhabits fast-moving, highly-oxygenated, often shallow stretches of streams and minor rivers flowing over substrates of rocks, gravel and boulders.

Aquatic plants are unable to colonise such habitats, but the conditions favour the development of a rich biofilm which carpets submerged surfaces. These loaches forage among the rocks, feeding mostly on aquatic arthropods and other forms of zooplankton.

A rocky substrate and high water flow should therefore be essential in the aquarium. While not especially belligerent compared with some Schistura, it is still territorial and in sparsely-decorated tanks any aggression can intensify.

Conversely, when much available space is filled by rockwork, individuals tend to select a shelter beneath a particular stone or pebble and defend it. Otherwise they are relatively peaceful.

Place rocks to enable you observe the fish moving through nooks and crannies as they are normally secretive - except at feeding times. Like many loaches these have a highly developed sense of taste and simply explode into activity when food hits the water.

In a high flow set-up they zoom into midwater to grab morsels, occasionally hovering in the flow or resting for a moment on top of a rock or plant leaf. 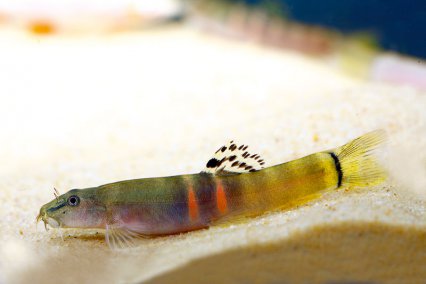 Their attractive body patterning is highly variable in terms of the positioning and number of light vertical bars, the extent of black spotting in the dorsal fin and even base colour at the rear of the body.

There are two principal forms; one predominantly pink and the other yellow, with colour varying in intensity depending on specimen. This appears to represent nothing more than pronounced natural variation as wild populations supposedly contain a mixture of both pink and yellow fish.

This is not related to gender as males and females of both forms have been recorded — neither does it appear significant in terms of hierarchical dominance or competitiveness.

How can I sex them and will they breed?

Adults are quite easy to sex. Males develop enlarged areas on either side of the head and females are noticeably plumper when gravid.

As far as aquarium breeding is concerned there appears to have been just a single reported success with this fish. Small numbers of fry were repeatedly recovered from a large, 567 l/125 gal river tank and the attached external filter.

The pair excavated a space underneath a flat rock and sealed themselves inside using pieces of substrate when spawning.

Schistura balteata is the original Sumo loach, now known as ‘Sumo I’ in the trade, and is plainer in appearance than ‘Sumo II’. The front of the body is a similar greyish colour, but with fainter blotches on the dorsal surface, and the rear is a muted shade of salmon pink.

The most prominent vertical body bars are thin and dark rather than relatively wide and red/orange, and these fade in some older specimens. It is also the larger fish, to 10cm/ 4”SL, and reportedly more aggressive.

There’s a raft of similarly-patterned populations inhabiting streams on both sides of the Tenasserim mountains. In my opinion, from images it appears that this ‘group’ is undergoing a speciation event, the mode of which has not yet been studied.

Some, such as S. cincticauda, S. paucifasciata and S. robertsi, have already been described, but it seems likely that several represent new species.

The identity of the former may also be in question, as, in his 1990 work on Indochinese nemacheiline loaches, Maurice Kottelat had designated a neotype not collected from the type locality. 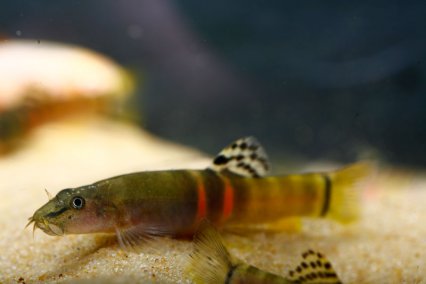 Décor: Will thrive in a hill stream-style arrangement with high, preferably unidirectional, water flow. Most of the substrate should be composed of water-worn rocks and pebbles.

Recommended tank mates: Many danionins and other riffle-dwelling cyprinids such as Opsarius, Mystacoleucus, Crossocheilus, Garra and smaller Barilius species. Most balitorid and some botiid loaches are also suitable, but other nemacheilids are best avoided unless the tank is very large. 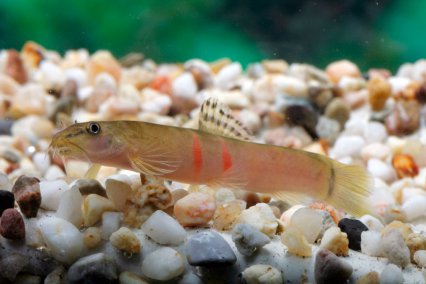 Kamphol Udomritthiruj is a renowned fish collector and exporter based in Bangkok, Thailand. He has introduced several species, including Danio margaritatus, Botia udomritthiruji and Yasuhikotakia splendida to the hobby.

Is the fish in the image here restricted to a single locality?

This is Sumo II, found in the Burmese Ataran drainage where we find Botia kubotai. It’s also found on the Thai side in Sangkla area, near Three Pagoda Pass. So far it is limited to only western Kanchanaburi Province, bordering with Burma. In the trade this is only sourced from Burma and not found south, in the Tenasserim zone, which is true balteata locality.

In the trade specimens are sourced from the Tenasserim from the Myanmar side and some Thai populations in Ratchaburi Province and southern Kanchanaburi Province.

What is its habitat like and what comprises the substrate?

It lives in watershed, with some forest cover, and high gradient areas where water falls with little forest cover. Substrate is coarse sand, gravel and rocks.

Is the water clear or turbid and is it very fast flowing? Is there seasonal variation in rate of flow?

There’s clear, flowing water, although during dry season I have seen fish trapped in static pools because streams have dried up.

Do Schistura occupy a particular micro-habitat?

They can be found in small high gradient streams and watersheds. There also appears a complex of similarly-patterned Schistura which range throughout the upper Tennaserim and Maeklong rivers.

Do any occur sympatrically?

I have yet to see them occuring together during any of my many field trips.

This article first appeared in the November 2009 issue of Practical Fishkeeping magazine. It may not be reproduced without written permission.