If you want the perfect catfish community, recent research into suckermouths of Venezuela might help. Dr Michael Hardman explains.

At least one third of all freshwater fish species occur in South and Central America. Within this neotropical fauna, the suckermouth catfishes (Loricariidae) are the most species-rich family. Suckermouths occur from Costa Rica to Argentina — and in Venezuela as many as 14 species can be found in a single stream!

For community ecologists, this hyper-diversity poses a problem. How do all these different species manage to co-exist when they seem to occupy the same niche in nature?

Until recently, suckermouths have been considered utility fishes. Most aquarists encounter the group when shown something brown by their local dealer after complaining of a constant algal problem. For many, however, taking that ‘brown thing’ home is the beginning of a love affair…

Though many species certainly help keep aquaria clean of attached algae, other suckermouths feed on detritus, insect larvae, seeds and even wood.

Aquarists have enjoyed a stream of increasingly beautiful suckermouths over the past 10-15 years, many of which have become so popular that tablet foods have been developed just for them.

Although some suckermouths prefer a meaty diet, most get their food by scraping a biofilm of fungi, algae and the tiny animals that grow on submerged surfaces such as fallen trees or rocks. Because there are so many such surfaces in the environment, and that biofilm quickly replenishes itself, suckermouths have a basically unlimited resource.

But if most suckermouths in a stream are all feeding on biofilm, why do we see so many different kinds in a small stream in Venezuela? Dr. Nathan Lujan, a graduate of Auburn University in Alabama, USA, wanted an answer and compared suckermouth communities in Venezuela, Guyana, Brazil and Peru. 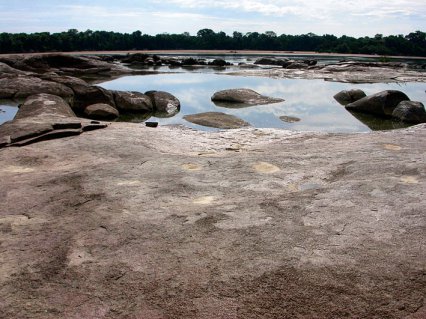 The Rio Ventuari is a white to clearwater stream with near neutral pH, moderate alkalinity and low conductivity and a site on the upper reaches in southern Venezuela is home to 14 species.

Nathan wanted to know exactly what they were eating. Because suckermouths scrape with fine teeth, their stomach contents are typically a brown mush. Not much can be learned from this approach as it only considers what the fish has just eaten rather than what is consumed over a lifetime.

You are what you eat!

The molecules that make up different kinds of foodstuffs are understandably different. Because we digest what we eat and then use those molecules to build and repair our own bodies, if we eat mainly vegetables our bodies take on a ‘vegetable signature’. If we eat mainly meat, we would have a ‘meat signature’. If we do as we’re told and eat a combination of meat and vegetables, our bodies have a signature ratio between the two.

That ratio depends on how much of each we eat and can tend towards meat if we like steak, or vegetables if you can’t get enough carrots and peas.

In the same way, this ratio can tell us what a suckermouth eats, even if we can’t watch it all the time or identify what’s in its stomach. By measuring and comparing the ratio across each of the 14 different suckermouths at the Rio Ventuari site, Nathan could begin to understand if they were all eating the same or different things.

All you can eat buffet

Nathan found that each suckermouth species had its own signature, but that some formed a tight cluster. Hypancistrus contradens, Leporacanthicus galaxias and L. triactis had meat signatures that suggest that these are feeding mainly on other animals such as aquatic insects, worms, shrimp or molluscs (snails and clams). Aquarists have noticed this in Vampire plecs (Leporacanthicus) which in the aquarium shun courgette in favour of prawns and musselmeat.

What does this mean?

If used to feeding peas, spinach, carrots and potatoes to your plecs, include shelled prawns and fresh musselmeat. Frozen bloodworms, water fleas and brine shrimp help round out the diet.

Just ensure there’s enough to go around and that none remains in the aquarium an hour or so later.

It’s important to offer a variety of foods to plecs as each has its own particular set of needs, and, if we are to provide the best possible care for our animals, we should at least give them everything they need.

Though traditionally considered detritivores or algivores, suckermouths are now being characterised as being trophically specialised. That means different species feed on a diversity of foods such as insect larvae, seeds, clams, wood as well as algae. Be sure to research the species you intend to buy and provide its preferred diet. 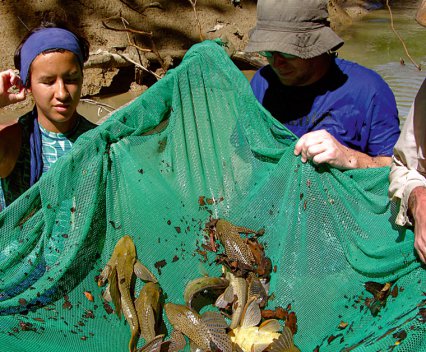 The suckermouth catfish family (Loricariidae) contains more than 80 genera and 800 species. By any index, it is an evolutionary success story. The reasons might include its ancient age, specialisation on abundant food sources and low dispersal. Because suckermouths stay close to home, any separation of their river basin can quickly isolate a population and enable speciation to take place.

Dr. Nathan Lujan has studied the systematics, jaw mechanics and feeding ecology of suckermouths in Brazil, Guyana, Peru and Venezuela. He is currently a postdoctoral research associate at Texas A&M University and focusing on bulldog plecs, Chaetostoma.

Why are suckermouths so successful?

They are an old group and diversity accumulates with time; older lineages having more species. They don’t move much or migrate either, which means that local populations can easily become isolated and drift to a new morphology.

In South America, river basins have seen much change and resident populations of suckermouths have likely evolved in line with the rivers.

In terms of evolutionary age and abundance in streamfish communities of South America, I think this has something to do with their early specialisation on a resource of biofilm that is essentially unlimited. Suckermouths have been successful because they have evolved unique ways of accessing it.

Some loricariids are distributed throughout South America, but others are found only in certain places. How do you explain this?

Those with broad distributions live in main channels of large rivers and have few barriers. Other species with narrow distributions are adapted to small river habitats and because there is low connectivity between adjacent river basins, they can’t get out. Ancistrus and Lasiancistrus are generalists, but there is much diversity in these genera, with some species having very small ranges.

Fish diversity in South America is incredible. Do loricariids follow the general pattern or are they exceptional?

They follow the general pattern in that they are an ancient lineage.

They are exceptional in that they have no competition for food and don’t move much. Many suckermouths spawn in cavities found in most streams and stray little from their birthplace.

They are also somewhat exceptional in that they exploit a niche (eating wood and detritus) that in temperate systems is filled by insects.