Something new on the mbuna front Some parts of Lake Malawi only reveal slight differences in species, but Ad Konings finds genuine mbuna newcomers on what was formerly a volcanic reef.

New discoveries seem to have been integral to Lake Malawi for more than two decades. Unexplored reefs sometimes yield new species, but these are usually just new geographical variants of already known species.

Everything depends on geology. If the reef is in line with a rocky shore of the deeper part of the lake it usually has no new species. However, if in a part which was land when the water level was much lower, as in prehistoric times, or surrounded by long stretches of sandy shores, there’s much better chance of finding new species.

One such location is Gallireya Reef, in a large bay, sometimes known as Youngs Bay, which is south of Chilumba. In 2002, the late Stuart Grant started to collect cichlids there and his divers concentrated on the two most common mbuna — Gallileo (=Gallireya) red top and Gallileo white top which is known in the US as the Blue afra.

Before I dived there for the first time I visited another site, in Chitimba Bay, where several species are regularly collected, including Aulonocara stuartgranti 'Maisoni', Petrotilapia 'Chitimba' and Tropheops 'Yellow- yellow.' This reef lies at 22m/72’ and has large sandstone slabs with planty of little rock piles.

Gallireya, the reef in Youngs Bay, means far off shore in the local Chitumbuka language, and is only 12m/39’ deep.

Reef with a difference

The structure of Gallireya Reef is quite different from that of Chitimba Bay, with strangely-formed rocks spreading on the bottom. They look of volcanic origin and are blocks of suddenly solidified lava. All are thickly covered with a mat of algae and sediment.

In the rainy season much sediment is washed into the bay, travelling to deeper parts of the lake. Since the reef is in its path, the sediment becomes entangled in the algal matrix on the rocks.

Normally, few cichlids would find sufficient food in such a sediment-rich environment but at Gallireya it is plentiful. They mainly browse from the upper parts of the rocky structures which are never higher than 2m./6.5’. Large sections of sand intersperse the groups of rocks and the most common cichlid on the sand is Aulonocara stuartgranti 'Maulana' . 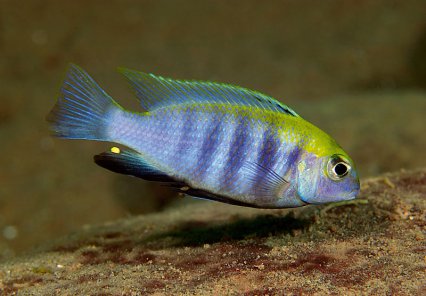 When first at Chitimba Reef I found what I thought were two different members of the genus Tropheops. I noticed yellow mouthbrooding females and yellow territorial males, and territorial males partly yellow (on the head) but with a blue body.

I couldn’t find a female partner for the latter and considered this male as a geographical variant of Tropheops sp. 'Weed'. The yellow form I called T. sp. 'Macrophthalmus Chitimba.'

I therefore regarded the blue-yellow males as also being T. sp. 'Macrophthalmus Chitimba'.

When I examined the fish at Gallireya, the nearest reef to Chitimba Bay, I again found all-yellow male Tropheops courting yellow females. However, there is also another common Tropheops at this site and where the females are grey. The male of this latter species is again bright yellow. 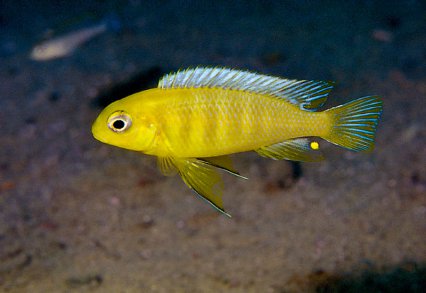 I  have now realised there are also two species involved at Chitimba, but the females seem to look identical. The form with yellow males and females — the Yellow-yellow variety at both reefs — now retains T. sp. 'Macrophthalmus Chitimba,'  which is the name originally given to its Chitimba population.

Along the northern shores of the lake a Tropheops species with such dark females is particularly common in this shallow rocky habitat and is best known as T. sp. ‘Black’ — but more likely the true T. gracilior.

I regard the species at Gallireya as different from T. sp. ‘Black’ and call it T. sp. ‘Black hara’ after the name of the village situated nearest to the reef.

This area is rich in sediment and in such environments yellow-coloured mbuna are often found. Maybe this 'camouflage' is more important for species survival against predators than as a distinguishing coloration.

To add to the confusion, there are two additional mbuna species at Gallireya with yellow males… 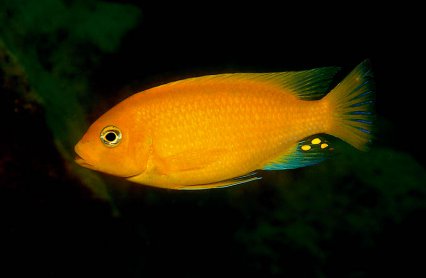 Petrotilapia sp. 'Chitimba' is a popular species. Females and juveniles have an attractive pattern of a few broad black bars. Territorial males are blue with yellow fins. Petrotilapia at Gallireya Reef is different and unlikely to be closely related to P. sp. 'Chitimba'.

Adult males are entirely yellow while females have a light-brown background with darker bars.

This species is possibly more closely related to P. tridentiger and males of the latter are entirely blue and the females of both species are similar in colour and pattern.

For the present I regard the all-yellow Petrotilapia (pictured above) as different and refer to it as P. sp. 'Hara'. 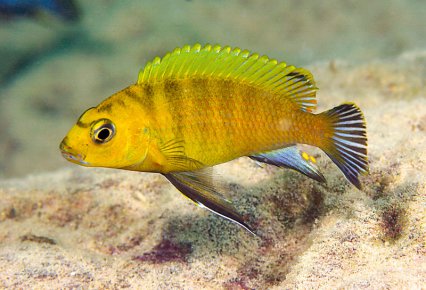 The fifth species at Gallireya with yellow males looks very uncommon and I’m still not convinced in what category of mbuna I should place it. I believe it to be a very large variant of a Pseudotropheus perspicax-like mbuna. Females of P. sp. ‘Perspicax hara’ have a black spot in the soft-rayed portion of the dorsal and light spots in the tail.

Two more mbuna are at Gallireya and found at higher densities than the previously described species — and they are not yellow! One has bright blue males and bright blue females. Territorial males have black bars, some of which can extend into the dorsal fin.

Bars into the dorsal is a characteristic often found in Cynotilapia afra and this is likely why this species got to be given the trade name of ‘Gallileo (=Gallireya) Blue Afra’.

Cynotilapia species feed from the plankton in the water column and males hover a few feet above their spawning caves picking at particles in the water. The blue species does not show this behaviour. Both male and female remain near the substrate, even when picking. 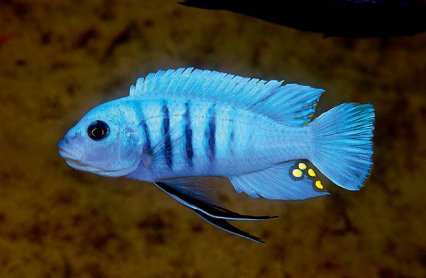 I have named this species C. sp. ‘Hara’ and it is a pretty fish with cobalt-blue coloured juveniles.

The other common mbuna, exported as ‘Gallileo Red top’, behaves like a Cynotilapia afra and initially I was certain it was the local afra variant. That was before I had a closer look at the teeth, which are bicuspid (with two tips). For that very reason it cannot be Cynotilapia, which are characterised by pointed teeth (unicuspid).

For the time being I’ll call this mbuna Metriaclima sp. ‘Red top Gallireya’ — which was previously also known as ‘Zebra long pelvic hara’. Females are dark brown-blue with a white edge to the dorsal with orange tips.

Metriaclima sp. ‘Red top Gallireya’ is common in the rockier areas of the reef, while C. sp. ‘Hara’ occurs more often over sandy sections of the intermediate habitat.

Look out for all these beauties at an aquarium store near you!

Most mbuna highlighted in this feature feed on tiny diatoms and strands of algae extracted from the biocover on rocks or from plankton in the water column.

In the aquarium, however, they are best offered a quality flake food instead of soft, protein-rich staples such as frozen brineshrimp, mosquito larvae, or live Tubifex worms. Flakes with a high percentage of Spirulina or other type of plant material are preferred.

Tropheops are bred fairly extensively by breeders in the Czech Republic and in Singapore, though they will frequently be imported under the name 'Pseudotropheus tropheops'

Tropheops should be kept in a Malawi cichlid aquarium set up for mbuna with lots of rock work, high pH and alkalinity, good mechanical and biological filtration, high oxygen levels and, importantly, lots of other mbuna to lower aggression levels and prevent hyper-dominant male mbuna from trying to take over the whole tank. Communities of 120cm/47” in length and 20 or more in number are best.

Don’t stock more than one male of each species, and outnumber him with two females or more of the same species. To lower the risk of males fighting, stock fish that have contrasting colours and patterns. Similar looking fish will be most likely to dislike each other.

Tropheops are about medium in terms of Malawi cichlid aggression, so will mix with a large variety of other mbuna species, including Labidochromis, Pseudotropheus, Metriaclima, Melanochromis, Cynotilapia, Labeotropheus and Iodotropheus. Build up high numbers of fish when they are all young as it is harder to introduce adult fish into established communities.

If mad about Malawi cichlids and are looking to do something different, why not set up a biotope tank for them, choosing only the species that live next to each other in the wild, like the species featured here from Gallireya Reef.

If you can find the right suppliers these fish are available, either captive bred or wild caught, and you can sit back, satisfied that you have created a very specific, authentic biotope. Sometimes half of the fun of being a fanatical fishkeeper is the thrill of the chase and unusual Malawi cichlids are highly collectable, yet easy to breed and sell on.