Just like cats and dogs, characterful cichlids can became part of the family. Here are some of the best home sharers.

What constitutes a pet cichlid? Any fish can be a pet, but big cichlids can become real family members.

Although they can’t join in family life, they show huge interest on goings-on outside their tanks and are regarded with affection by the whole family. They usually live long and are mourned when they die.

Most come from the Americas. There are large cichlids in Africa too, but few seem to have the character of their stateside cousins.

Many cichlids make good pets, including my choice of the half dozen here. If it’s large and American, it will probably be happy to join your family.

This species (pictured above) is sometimes called the Yellow devil as males can be extremely aggressive and hard on females. A big male can be up to 36cm/14” long, but 30cm/12” is more the norm.

This is a cichlid found in the Nicaraguan lakes, but is a bottom sifter rather than a piscivore, with snails forming a significant part of the diet.

This cichlid has variable coloration. Normal is light grey with dark vertical bars, but half the wild populations are oligomelanic, meaning they have less than normal melanin. The way this is expressed varies. There are plain individuals which may vary from whitish through lemon to orange-red; specimens where one of these colours dominates but with irregular black markings, and tricoloured fishes with orange, whitish, and some black.

All Midas cichlids start normally coloured, but as some individuals grow the melanophores (black pigment cells) start to die off, exposing the underlying white/yellow/orange. Some believe that all specimens eventually undergo this change if they live long enough. The age and size at which it takes place seems random, but in the UK aquarium strain it seems sooner rather than later.

There’s no way of telling what your pet will turn out like if you buy a small, striped one — but that’s part of the fun. 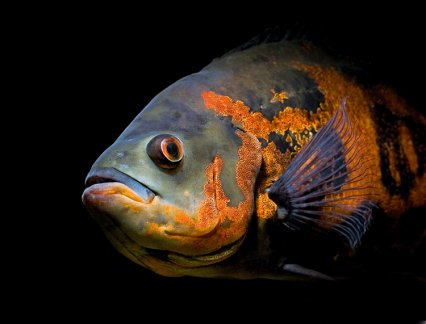 The Oscar is the best-known and most common pet cichlid. Some do it intentionally, but a significant number of Oscar keepers never plan on keeping a large cichlid, but fall for a little one in a shop begging to be taken home.

Then by the time it has consumed the rest of the community tank it has established itself as part of the family.

The origins of the name are lost in time, but may have started as the pet name of a particular individual. Certainly a large number of pet Oscars bear that pet name, even those that prove to be females when they lay eggs. Otherwise they are unsexable.

Wild Oscars are found in the Amazon drainage and ideally water should be soft and slightly acid. However, as you will almost certainly be keeping a tank-bred one whose aquarium ancestors go back decades, this isn’t critical.

There are several aquarium-produced colour varieties, all requiring similar care, except for the albino form which is light sensitive. Maximum size is around 30cm/12” TL, with some cultivated forms staying smaller.

Oscars are piscivorous and ideal foods are raw fish, shrimps, and prawns, but earthworms also go down well. Variety is important as Oscars can become hooked on a particular food and refuse to eat others unless you can starve them out for several weeks.

Dry foods are inadvisable. Showers of particles from the gills will pollute the tank and excess dry food seems to cause digestive troubles which can be fatal.

Oscars enjoy toys in the tank such as plastic plants, and I know of no other fish that will play with a table tennis ball! 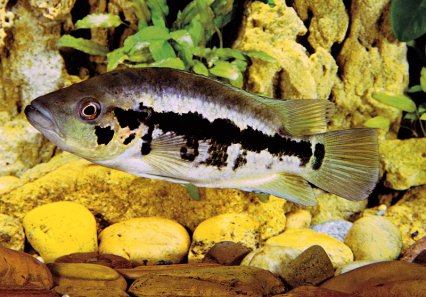 This Central American is among the world’s three largest cichlids, with males up to 76cm/30” and females 60cm/24”. Also known as Dow’s Cichlid, it makes a great pet.

I have never known a full-grown one, but a friend had a female called Miss Piggy who would create tidal waves and splash his desk if he didn’t respond to some initially polite requests for food.

This species is found in rivers, but is best known from the Nicaraguan lakes. It’s a piscivore and plays an important role in preventing the local small cichlids — Convicts and Neetroplus nematopus — from dominating the lakes through prolific breeding. In response, adult small cichlids prey on dovii fry, so the lakes don’t end up with too many large predators.

Perhaps because of its size, dovii is rarely seen for sale. It probably doesn’t help that most stocks of youngsters are tank bred and an uninteresting plain silver. They are also unsexable, so when buying a tiddler you’ll be taking pot luck, though you’ll know later as females are yellow with black markings and males blue-green.

Like most large cichlids, this species isn’t fussy about water parameters, but the ideal is hard and alkaline. Very acid water should be avoided. 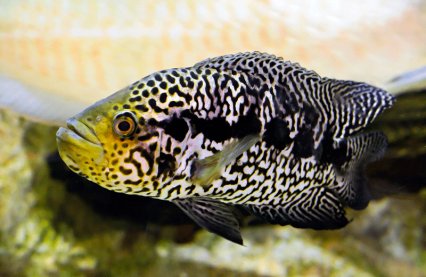 Also known as the Mannie, this is another piscivore from the Nicaraguan lakes and managuensis means of (Lake) Managua. Like P. dovii it is a controller of pests in lake ecology and requires similar water conditions.

It is a well known and popular species, but most fishkeepers don’t realise that it can grow to 60cm/24”, though 50cm/20” is a more usual. Most remain smaller in captivity.

Like P. dovii, this species is eventually sexable, as males turn darker and larger than females. It’s possible to make mistakes with adolescents, as I know. A friend and I were at a store where a 13cm/5” Jaguar was begging to be purchased and I persuaded my friend that he needed a nice pet.

I thought it was a female, and it was duly christened Waynetta. However, within a few months it was quite clearly male — but the name stuck.

Waynetta was territorial and apparently jealous. His owner had a dark telephone about his size, and Waynetta used to go ballistic when his owner picked up the receiver!

Although most people keep a pair, as they are easy to breed with little male/female aggression, a single Jaguar can make a very characterful pet. 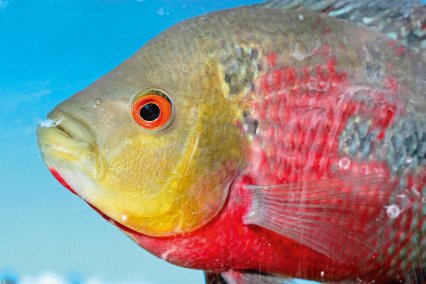 The first pet cichlid I met, apart from my own Oscar, was a Trimac called Fred who thought women and children were wonderful but hated men. He’d charged his front glass and split it the week before because the man of the house came too near. This, however, is not normal large cichlid behaviour!

This species comes from southern Mexico, Guatemala, and El Salvador and is found in lakes and sluggish rivers, often with less than optimal water quality — and it is equally unfussy in the aquarium. Any hardness and a pH of 6.5 upwards will suit.

It’s rare to see real Trimacs now. They were never that common and supplanted in UK stores by the dreadful man-made hybrid Flowerhorns, like the one shown above. However, a few enthusiasts are still breeding them. 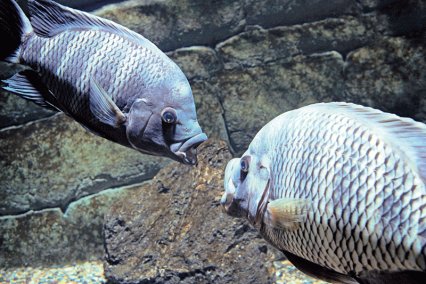 When first imported, the strikingly-coloured Buttie became the cichlid everyone wanted. Yet that soon changed when people realised how aggressive a large male can be.

Nevertheless a single specimen makes a great pet and this is the only way to keep an adult male as it will kill anything not protected by a divider. It is the only Tilapia I know of that behaves as disgracefully as the notorious pet cichlids from across the Atlantic.

The species originates from lowland rivers in Guinea, Liberia, and Sierra Leone. It’s said to prefer rocky terrain, which is as unusual as its aggression. While most Tilapia are vegetarian, this is partially piscivorous.

However, it conforms to the genus norm of being hardy and not much bothered about water chemistry or quality, and isn’t fussy about food either.

A large cichlid will live for many years, so be prepared to accept the responsibility for your pet for as long as it lives. Accepting that responsibility will be repaid with seemingly endless pleasure!

How do I look after them?

Because pet cichlids are typically 'involved' in what’s happening outside their tank, they seem quite happy with relatively small space. Even so they must be able to swim up and down and turn easily.

For the fish to enjoy the stimulus of domestic life it must be where it can have a good view of activity — ideally in the living room.

Given the chance pet cichlids will exhibit all the normal destructive habits of their kind, such as digging and using the substrate to bury heaters and filter inlets, tossing loose heaters against the glass, undermining rockwork and possibly bringing about their own demise as well as creating a mess on your carpet.

Make sure your tank is cichlid-proof: décor must sit firmly and be too heavy to move; heaters and filter pipes siliconed into place and above bury level, or in a special compartment.

Provide gravel for digging, as this helps stave off cichlid boredom when nobody is around. Use cover glasses to protect lights from potentially hefty splashes!

Big fishes will produce lots of wastes, so efficient filtration is very important.

Go for large media capacity and relatively slow turnover, as you don’t want your pet to be feeling uncomfortable tackling any strong currents.

Avoid foods that break into particles and pollute the tank, and try not to overfeed. Watch your pet’s waistline and, if necessary, impose a diet.