The Shotsilk goby is a stunning dartfish but, as Dave Wolfenden explains, you may have to minimise any stress factors to appreciate it.

Is this a true goby?

It’s not when it’s a Shotsilk goby! Ptereleotris zebra must be one of the hobby’s most under-rated little fish. Also known as the Chinese zebra goby, this is a kind of dartfish and so therefore a relative of ‘true’ gobies.

Where it is found and how does it behave?

They’re not only found around China but also around a large area of the Indo-Pacific, Red Sea and Great Barrier Reef. They are found from around 2-30m/6.6-98’ and will reach a 10cm/4”, looking absolutely stunning.

Arguably this is the most attractive of all the dartfish; their slender body exhibiting bright, metallic green coloration, punctuated by vertical stripes of pink with blue facial markings.

The name ‘dartfish’ is pretty apt. Their behaviour involves hovering above the reef’s substrate in groups, exhibiting a ‘nervous’ demeanour and always ready to dart to the nearest crevice. These diurnal (daytime-active) fish also use such crevices to sleep in. 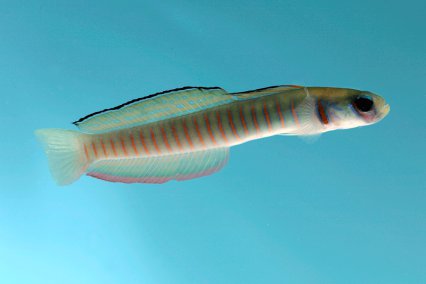 How should I set up my aquarium for them? Should certain tank mates be avoided?

Aquarium set-up needs to take this skittish behaviour into account. Shotsilk gobies are definitely not suitable for aquaria which contain boisterous and/or predatory fishes. Predators, such as triggers or lionfish, will find the timid dartfish just too tempting, whereas boisterous, territorial fishes intimidate them. This renders them out of sight, and presumably stressed, for potentially long periods.

In extreme cases, Shotsilks spend so much time hiding they are unable to obtain enough food to survive — and stress also appears to take its toll.

Potentially unsuitable tank mates include many damsel species, which can be pugnacious, numerous tangs, wrasses and butterflyfish. Suitable companions should include more sedate groups and dragonets, jawfish and blennies display the more peaceful attitude which helps ensure Shotsilks are confident enough to look their best.

These are totally invertebrate-friendly fish, but some invertebrates are predatory and the ‘gobies’ can make an easy target! Seemingly all dartfish also tend to jump if startled, so open-topped tanks can be risky.

Shotsilk gobies can, due to their size and habit of hovering around a fixed spot, be kept in reasonably compact aquaria, with around 100 l/22 gal being suitable for a pair.

Aquascaping is, however, extremely important if the Shotsilks are going to not only thrive, but also display well. P. zebra relies on natural hiding places and won’t construct its own, so these will need to be provided. Gnarled lived rock riddled with holes is ideal.

These fish will also appreciate caves and, to spoil them, offer a fine sand substrate as they may use this as a retreat as well as any rocks and caves.

Are they best kept alone or would groups be better?

P. zebra normally spend their first few days in an aquarium hiding, but soon emerge if conditions are right. They live normally in the reef’s shallow water zone in quite turbulent conditions and will similarly thrive in vigorously-moving water.

Are they pretty robust fish?

Like most other goby-like fish, this is pretty hardy and disease is rarely an issue if maintained in a reasonably stress-free environment.

They are, however, sensitive to many medications and can react to copper treatments for Cryptocaryon, for example. If possible use alternatives to those with formaldehyde, copper or malachite. Copper would be a no-no for the invertebrate aquarium anyway! 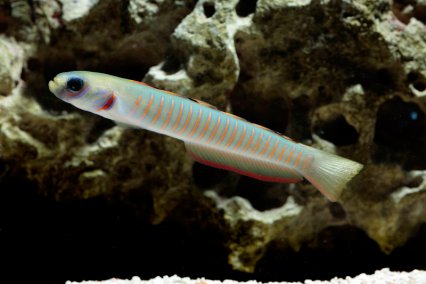 What’s best for their diet?

Feeding is rarely a challenge provided they aren’t overly hassled by other tank mates. They are planktivores and spend most of their waking hours feeding — needing regular meals preferably twice a day. However, most adapt easily to a captive diet.

They should accept small frozen feeds such as Mysis and Cyclops, as well as flakes and small pellets. In an established reef set-up, they will forage to a certain extent on natural populations of copepods, amphipods and other planktonic beasties.

P. zebra might be a good bet for captive breeding efforts and a few species of true goby have been successfully bred and reared in the aquarium, and they share similarities in reproductive strategy.

The papilla is a tube-like structure used to deposit eggs or sperm, and in mature males, tends to be more pointed, the female’s papilla having a more rounded appearance).

Another tactic is to keep a group of several individuals and hope that a pair, or pairs, will naturally form. Courtship has been observed in the aquarium, and characterised by the male ‘mouthing’ the female and beating his pelvic fins before embarking on a parallel swimming behaviour with her.

The eggs are laid in a cave and the adults guard them. The resulting fry are incredibly small and very sensitive to environmental fluctuations, which makes them so challenging to rear. I suspect, however, that it’s only a matter of time before some enterprising aquarist succeeds in culturing this species.

Can I keep just one Shotsilk goby instead of a pair or small shoal?

There’s no reason why a single specimen shouldn’t survive, but an individual won’t behave as naturally, or as interestingly, as a pair or group. They are very much social fish in the wild, so best keep them at least as a pair.

Which other dartfish are commonly available and is their care any different?

The Orange-striped gudgeon (Ptereleotris grammica) from the Southern Indo-Pacific is a deeper water species which makes it more difficult to obtain than P. zebra, consequently commanding a correspondingly eye-wateringly price.

There are actually two sub-species and P. grammica grammica is more sought after than P. grammica melanota due to its more colourful appearance. This species seems to fare best in a relatively dimly-lit aquarium and should ideally be kept in pairs. Care is generally quite straightforward.

Another species occasionally offered in the trade, and considerably less expensive than the Orange-striped gudgeon, is the Streamer gudgeon or Blue hana goby (P. hanae) from the Western Indo-Pacific. This is characterised by trailing caudal fin rays and ‘worm-like’ appearance.They can be kept individually and generally adapt to aquarium life well — but very prone to jumping out!

In the wild they are often found living in burrows with Alpheus pistol shrimps. Unlike the mutualistic interactions many gobies have with shrimp partners, however, the dartfish doesn’t really have a ‘relationship’ with the shrimp and behaves less like a lodger and more like a squatter!

‘Shot silk’ is the name given to the shiny silk fabric which appears as different colours, depending on the angle it’s viewed from. The shotsilk goby’s common name is inspired by the fabric because of the fish’s reflective, iridescent and metallic coloration!

Watch out for ominous early signs when shotsilk gobies start to get aggressive. Such interactions between conspecifics are initially characterised by a subtle signal — courtesy of the normally hidden chin barbel!