How many species of Amblyeleotris are there?
Thirty-six have been described so far and there are underwater photographs of more, some of which have yet to be collected. There are 13 genera of gobies living in symbiotic association with Snapping shrimps. The genus Cryptocentrus has a similar number of species and most are just as colourful.

The largest species of Amblyeleotris is the Giant shrimp goby (A. fontanesii) and reaches at least 20cm/8” in length. I am not sure of the smallest, but A. fasciata grows to only 6cm/2.4”.

How do the shrimp and goby find one another?
When a late post-larval goby is ready to settle out of the pelagic realm to the substratum we think its final clue to finding a burrow is an olfactory stimulus from an alpheid shrimp. 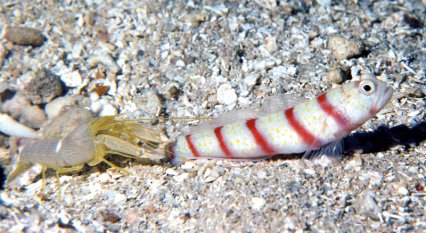 How is the burrow constructed?
It is dug by the shrimp, generally a male-female pair. The sediment can be mud, sand or fine gravel and the Giant shrimp goby is one of few that live in mud.

Shrimps in sand construct an arch of shell or coral fragments at the entrance. The burrows seem to require almost constant maintenance, with the shrimps moving sedimentary debris on busy outstretched chelipeds. As they leave the burrow they maintain contact with the goby via an antenna.

Dr Ilan Karplus in Israel did his PhD thesis on goby/shrimp symbiosis in the Red Sea. Down the burrows he poured a liquid resin that solidified, then dug it out to show each burrow form that often branched, sometimes coming to the surface nearby.

Do we know how the relationship has evolved?
I published a paper in 2005 with Philip S Lobel and Christine Kennedy in the journal Environmental Biology of Fishes that compared two gobies that had been seen occupying the burrow of Alpheus floridanus.

The Nes longus goby has a close symbiotic association, acting as the sentinel with the shrimp and maintains contact with the fish by antenna when it leaves the burrow. The other goby, Ctenogobius saepepallens, simply takes advantage of the shrimp’s burrow facility!

There is no symbiotic contact, but the two tolerate each other. If the goby is in the way when the shrimp wants to dump its sediment, it bulldozes the fish aside. A close association could evolve over time.

This item first appeared in the March 2010 issue of Practical Fishkeeping magazine. It may not be reproduced without written permission.