Returning to your hobby roots can be an invigorating experience for you and your fish. Bob Mehen models a modern home for his first aquatic sweetheart.

Hindsight is a wonderful thing, and there can be few fishkeepers who haven’t wished for a second chance to do something again, only better. If we’re being honest with ourselves, most of us have done something stupid, ill thought out or just plain wrong, often with disastrous consequences.

I was thinking this when I found an old ‘stock book’ that dated to the mid 1980’s, back when I started keeping fish as a teenager. While in some parts it was a misty-eyed jaunt down memory lane, where Blue-eyed panaque could be had for £20 and under-gravel filters were king, in others it was less rose tinted.

My early stock choices were often catastrophically bad as the addition of a ‘Midnight catfish’ to my fledgling community tank showed. This tempting 7cm beauty turned out to be Ariopsis seemanni, a 30cm brackish predator, who made short work of my tetras over a couple of nights before, according to my records, being ‘returned to Amazon Aquatics’. If only my research had been as thorough as my record keeping was.

All this aquarium time travel made me look to see what my entry point into the hobby was. What was the first fish that I brought home? Which of the many available species caught my eye above all others?

My first fishy love was a pair of Dwarf Gourami, Trichogaster lalius (then Colisa lalia), for the princely sum of £2.50. They didn’t last more than a few weeks as my only resource on fish was the rather sparse RSPCA ‘Care for your Tropical Fish’ book. A brief treatise at 32 pages, it made no mention of cycling, water changes or much else, but startlingly did suggest that a 60x30x30cm aquarium was ideal for ‘five Glass catfish, five Glowlight tetra, one Siamese fighting fish, two Kissing gourami, two or three Corydoras, one Plecostomus, three Harlequins and two pairs of guppies...’

Thankfully my budget didn’t stretch to this ‘recommended’ scheme, but I made a similarly poor stab at it with my weaponised ignorance. A little knowledge truly is a dangerous thing.

Some thirty years later, with plenty more water under the bridge, I hit upon the idea of doing justice to this first fishkeeping love. I wanted to create a place where Dwarf gourami could thrive. I’m not talking biotope, but a community set-up, filled with life and colour that would still allow them to feel at home.

Back in the late 20th century my first tropical tank had been very much of its time. 60x30x30cm with a Juwel hood containing a single Gro-lux fluorescent tube, casting the tank in a strange pinkish glow.

It may well have been ideal for plants but was largely pointless as any greenery came from plastic Second Nature Plantastics.

Filtration was provided by an under-gravel filter with a generous bed of pea gravel, powered by a Whisper air pump. Heating was an old school heater-stat, that looked like a it was made from a test tube with the electrical bits sealed inside with a bung.

Fishkeeping tech may still largely aim to achieve the same goals as its 1980’s counterparts, but technology has moved on.

The new tank is 150x45cmx30cm, illuminated by LEDs, filtered by a Fluval FX6 and warmed by a 300w resin-shrouded heater.

Digging deeper into fishkeeping nostalgia, the first tropical tank I remember was at an old school friends house — an overgrown aquatic jungle, with fish that were only occasionally visible amongst the greenery. It may not have been the most beautiful tank, but the sudden appearance of a Kuhli loach or Red-tailed black shark through the vegetation, or the bright colour of a Neon tetra flashing in the light was exhilerating.

Over the years I’ve tried most things, from Central American cichlids to native marines.

I’ve set up tanks ranging from tropical reefs to Amazonian flooded forests, and much in between, but so far in my fishkeeping history I’ve never really given planted tanks a proper go. To remedy this and recapture some of the feeling of my old friend’s overgrown layout, I added a specialist substrate and planted densely with a selection of robust species, with Cryptocoryne species featuring large.

The last three decades have not been kind to the Dwarf gourami and it has become a shadow of its former self. Once considered hardy and ideal for beginners, nowadays they have a wretched reputation for being sickly, short lived aquarium fish thanks to a virulent infection that has come to be known as Dwarf gourami iridovirus.

Add to this the decades of inbreeding used to create several colour forms — Neon, Red, Sunset and more — and the fish in the shops today are not a patch on those that first caught my eye. Wild or original variants of the Dwarf gourami are one of the most attractively coloured small tropical fish, so why would anyone think that a plain red or solid metallic blue version is an improvement?

Still, one thing that hasn’t changed is the Dwarf gourami male’s behaviour towards the female.

Like many anabantoids, males can be at best bothersome, at worst downright violent to the opposite sex, and unless you’re planning on breeding them then a single male may be the way to go.

Larger tanks could get away with a male and a small harem of females, but why take the risk? 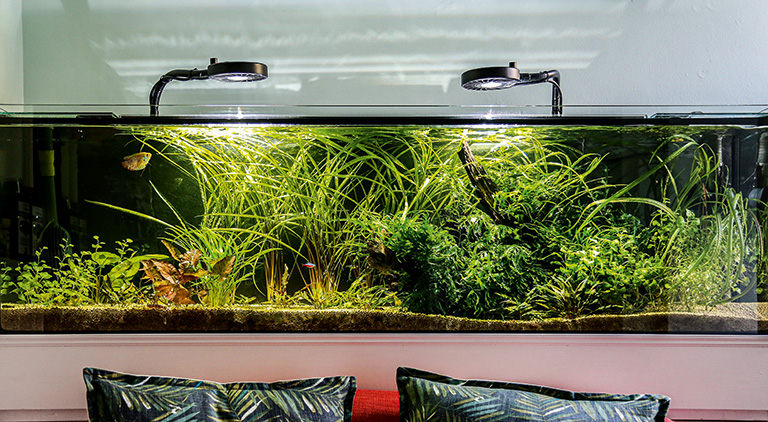 Planted tanks in any form other than a load of Anubias and Java Fern tied to a log are a new direction for me — my aquascaping skills veer towards Farmer George more than George Farmer.

Finding an attractive wood centrepiece was the first challenge.

The tank is narrow, and wide bracing bars on the tank mean that the opening on top is only 15cm wide. Eventually I joined three small pieces of wood with stainless steel screws inside the tank to give the look of a sunken tree root, and I covered this with Bolbitis heudelotii and Microsorum pteropus ‘Trident’.

Along the back of the tank I added Cryotocoryne balansae, a giant amongst crypts with a mature leaf length of around 60cm. The middle and foreground were filled with C. spiralis, C. walkeri, C. undulatus ‘green’ and ‘brown’ and C. petchii.

Lobelia cardinalis ‘Wavy’ added a pleasant change of leaf shape while I hoped that the striking red spotted leaves of Nymphaea lotus would one day reach the surface and form attractive wide pads.

The back corners were populated by the crinkled leaves of Crinum calamistratum and the corkscrew foliage of Aponogeton ulvaceus.

I held off stocking fish until the plants were well underway, but did add half a dozen Amano shrimps, Cardina multidentata, to help with algae. Daily doses of glutaraldehyde ‘liquid carbon’ and fertilisers meant the plants got off to a good start. However, it wasn’t long before realising that I had a botanical monster on my hands. 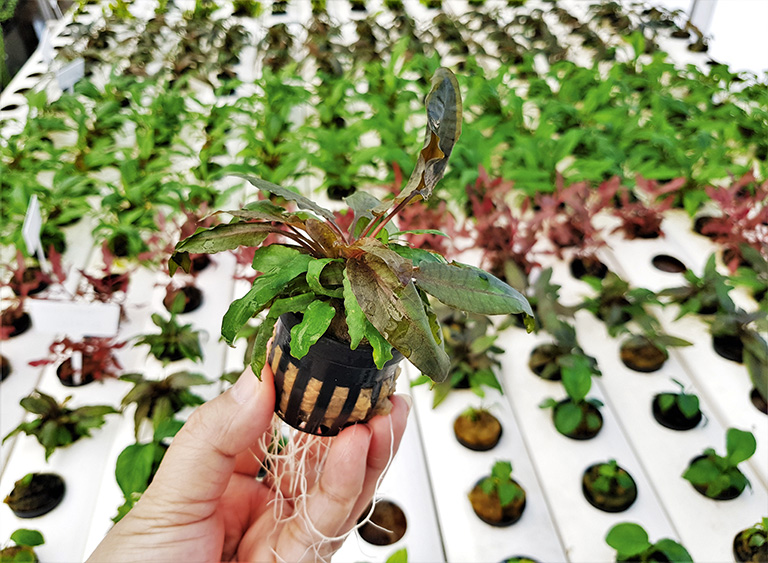 Aquatic plants given sufficient food and light can outgrow anything on land, and the Aponogeton clearly liked my set-up. Within a month its leaves were in excess of 90cm long, shading half the tank. Beautiful though it was it threw the balance of the layout, so was swiftly removed.

The sudden influx of light that resulted led to the next issue — hair algae on many of the Cryptocoryne leaves. The shrimps seemed uninterested in eating this growth, so a trio of tiny Siamese flying fox, Crossocheilus siamensis, were added and lived up well to their algae eater name, making short work of the hairy menace.

In the absence of any naturally coloured Dwarf gourami in local shops, I added groups of small shoaling species, with Cardinal tetra, Cheirodon axelrodi, Black neon tetra, Hyphessobrycon herbertaxelrodi, and Gold tetras, Hemigrammus rodwayi, adding colour and movement against the increasingly green back ground. With the tank now maturing, a group of small suckermouth Otocinclus helped keep any emerging growth of diatoms firmly under control.

Still awaiting the arrival of a suitable Gourami, I decided to again return to my early fishkeeping memories and add some Kuhli loaches, Pangio semicincta. In my early tanks, budget seldom allowed more than a couple of these, so they were shy and rarely seen. Added to this was the fact that they had a habit of disappearing and taking up residence beneath the undergravel filter plate, so it was alarmingly common for me to forget I owned any until I did a big ‘gravel and all’ clean out.

This time I stocked more generously, building numbers until I had 16. They responded by being bold. Any food added to the tank led to a writhing, whiskered frenzy as they seemingly appeared from nowhere and everywhere at once. Then, day by day numbers dropped, until just one remained.

I was baffled, and feared their inquisitive nature had led them past cover glasses and out behind the aquarium. Filter maintenance found their hiding place. These slippery customers had wriggled their way through the filter strainer, down 8ft of pipe work and taken up residence in the FX6! They were returned to the tank and a piece of coarse foam has prevented further exploration. 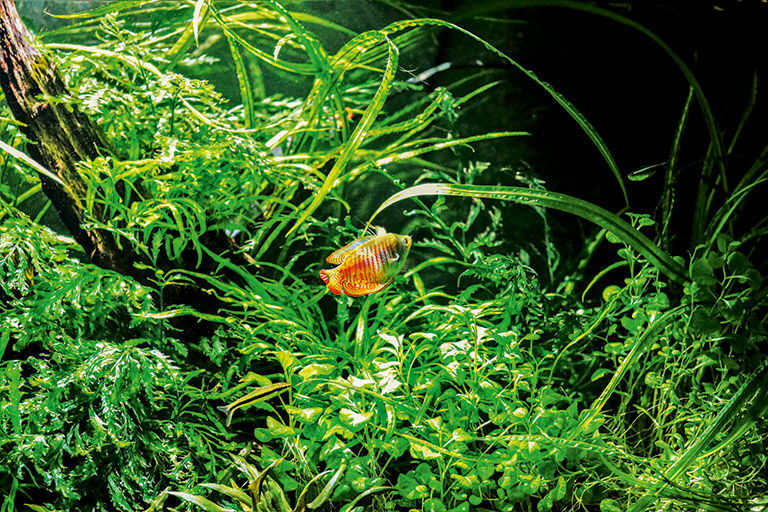 Big Phil settled into his home.

Finally, after over six months of waiting, my local shop sourced a tank full of healthy looking, naturally coloured Dwarf gourami. I picked out a single, active, inquisitive male as the final piece of the jigsaw.

For once, years of experience appear to have served me well. What I’d forgotten from my earlier effort was what a characterful species this is. Within a short time, our new resident had earned itself that rarest of things in my tanks — a pet name. ‘Big Phil’ has shown himself to be endlessly entertaining in the manner of a diminutive Oscar.

Nine months on, the tank has matured into the lush, green jungle I had intended, and Big Phil has proved himself an endearing centrepiece species.

Now all I need to do is throw out the sofas and make sufficient space to set up a vast brackish aquarium to give that ‘Midnight catfish’ the same second chance.

Dwarf gourami iridovirus has been identified as closely related to the Murray cod iridovirus. A third condition, Infectious spleen and kidney necrosis virus, seems to have originated from the same ancestor species. All are within the Megalocytivirus genus.

The disease causes emaciation as the fish stop feeding, distended abdomens (that fill with fluid) reddened intestines and enlarged spleens. Mortality rates in Dwarf gourami appears to be upwards of 90%, and being a virus there’s no cure.

The little research that exists suggests that wide numbers of different fish may act as carriers, though only a few appear to succumb to the infection. It’s anecdotally noted that if a tank has housed an infected fish that subsequently died, later additions of Dwarf gourami are almost certain to pick it up.

● Temperament: Shy, except with its own kind which it may bicker with