Set up a Kuhli loach hotel! Steve Hunt’s Kuhli loach was in dire straits. The nano tank it had called home had been a present for Steve’s daughter, but it was woefully small. A curve-fronted little all-in-one lump of barely 30l/ 6.6 gal, it had become tired and grubby, hidden away in a corner, decrepit and embarrassing.

My original offer was to overhaul the tank, revamp it and make it shiny once more. The centrepiece of the tank — the crowning achievement — was to be a tubular ‘loach hotel’. The idea was simple. A bundle of pipes was to be constructed into a large pyramid, with all the tubes facing the same direction. Any mixture was to be used — ceramic, plastic, old hose or miscellaneous. They were to be glued together, and then given a thatched roof of Java moss, strategically glued at key points. That was the plan.

Then one morning a 102cm long Ciano Emotions Nature Pro tank turned up for review and blew all those early plans out of the water. I offered it to Steve to break in for me, and we went back to the drawing board. ‘How about a luxury, open plan apartment,’ I suggested, ‘with plenty of crevices and open spaces?’ Steve was sold on it. 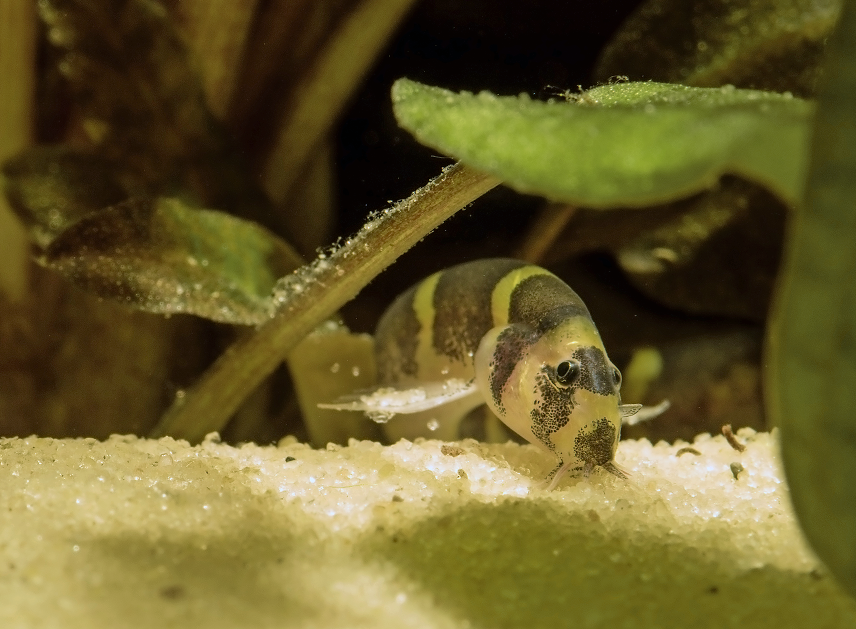 With the added swimming area, we plumped for a streambed tank with extra inhabitants. Kuhli loach are handsome but shy, and even a dozen or so in this tank could prove hard to spot. Give them too many hiding spaces and you’ll never see them. Don’t give them enough and they’ll never become confident enough to show as much as a whisker. Many a tank has ‘lost’ its Kuhli loach for years at a time, only found again when the tank is eventually stripped.

Kuhli loach are Malaysian fish, so we wanted a tank with plants from that part of the world. That meant two easy targets appeared straight away — Cryptocoryne and Java fern. 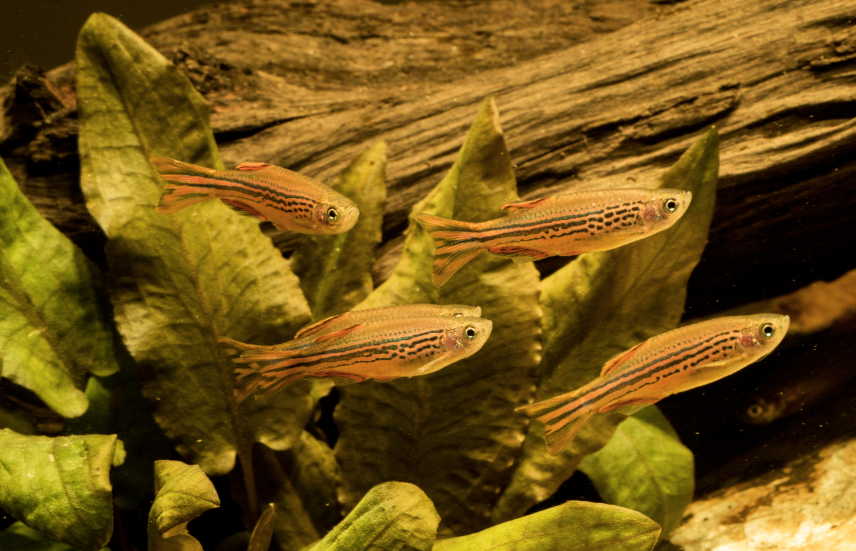 For tank mates, we needed something that could get on well with low flows. Kuhli loach hate high flows (which is handy, as the outflow of the tank’s filter is pretty mild), coming from slow moving, leaf-littered and often darkly acidic waters. A little head scratching and we came up with the idea of danios. While not entirely geographically correct, Brachydanio kyathit (from Myanmar) has enough overlapping requirements of water (soft, acidic, slow flowing) and temperature (best under the usual 25°C/77°F tropical catch-all) to live in harmony here. And given that they make their living at the middle and surface of the water column, they’d provide plenty of movement while the loaches were out of view. It was optimistically hoped that they might even act as ‘dither fish’, helping to boost the confidence of the loaches and encouraging them to come out more.

We were pleasantly surprised when they did.

Here's how the tank went together... 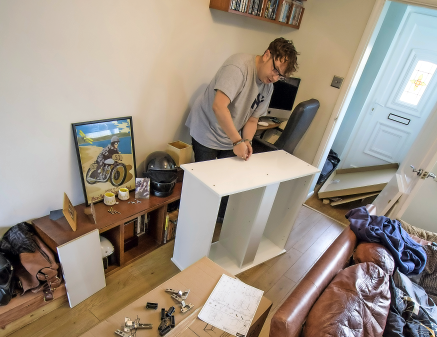 1. The cabinet was assembled and put into place with the tank on top. We placed it against a wall in close proximity to power sockets, and as we were on a ground floor, there was little worry about finding floor supports and positioning the tank across them. Once in place, a spirit level was used to check that it was sat squarely and evenly. 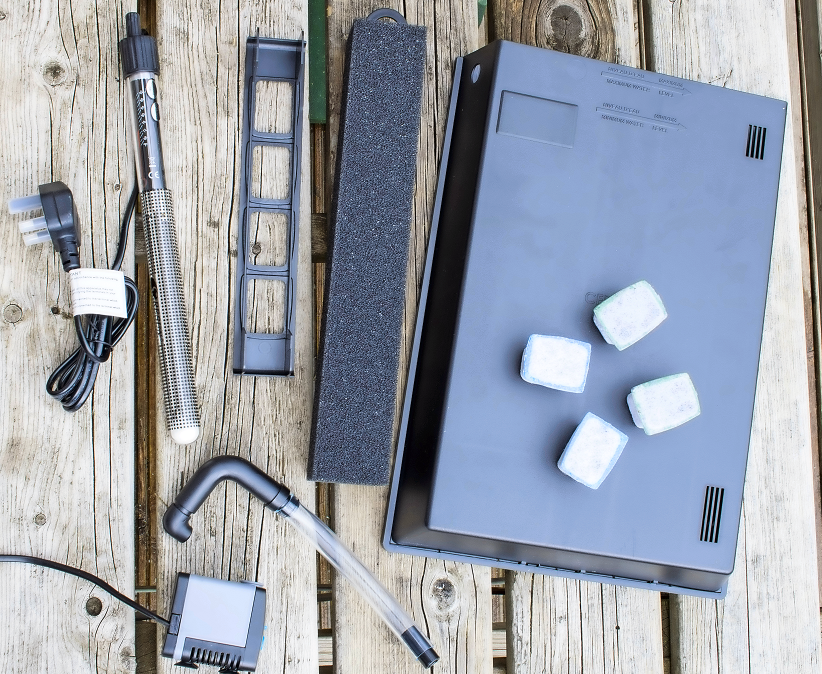 2. The filter was assembled. The Ciano filter uses a mixture of cartridges and foams. When constructing a filter, always ensure that things like carbon pouches are quickly rinsed, and that any media sealed in packaging for transport is liberated from it. Many a tank has failed because the biomedia was trapped in a plastic bag when everything was switched on! 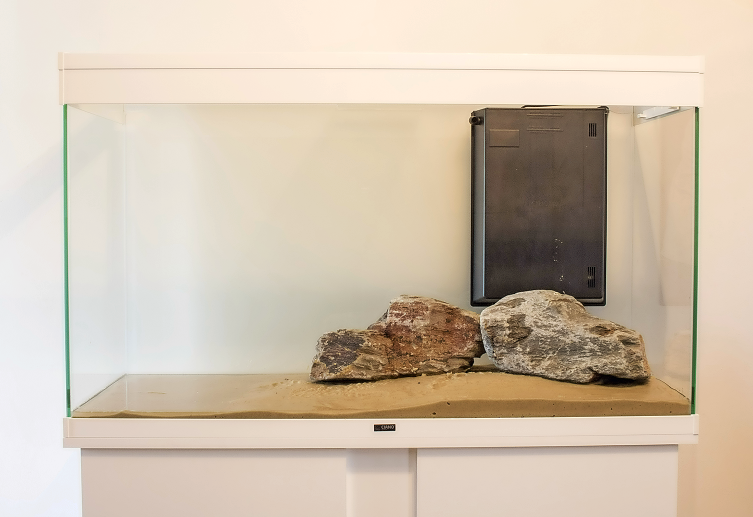 3. Pre-washed silver sand is added and shaped into a mild slope, and the two largest foundational rocks added. The rocks cover a maximum of two-thirds of the tank for both pragmatic and aesthetic reasons — an open area allows for debris to accumulate and be removed more easily than if the whole base is decorated. 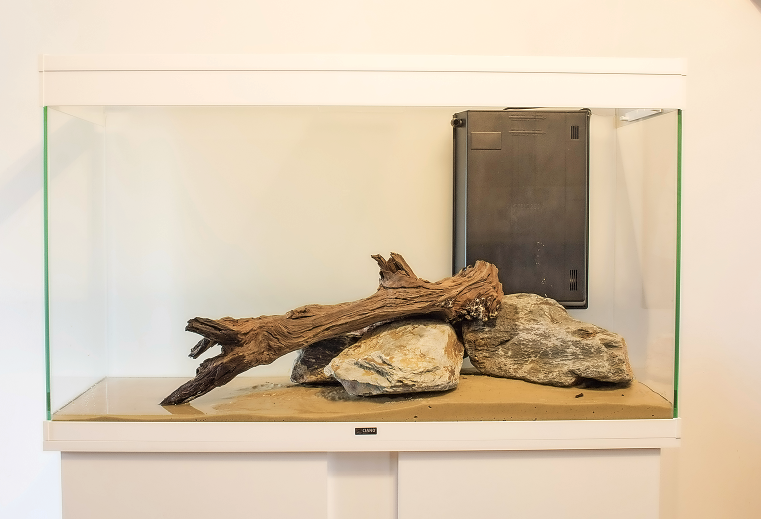 4. A third stone is added (and note the way that it has been placed, allowing for a broad cavern underneath) and a large chunk of bogwood added for both height and to reach out into the ‘open’ region. At a later stage, the wood may be used to house plants such as mosses or Java ferns. 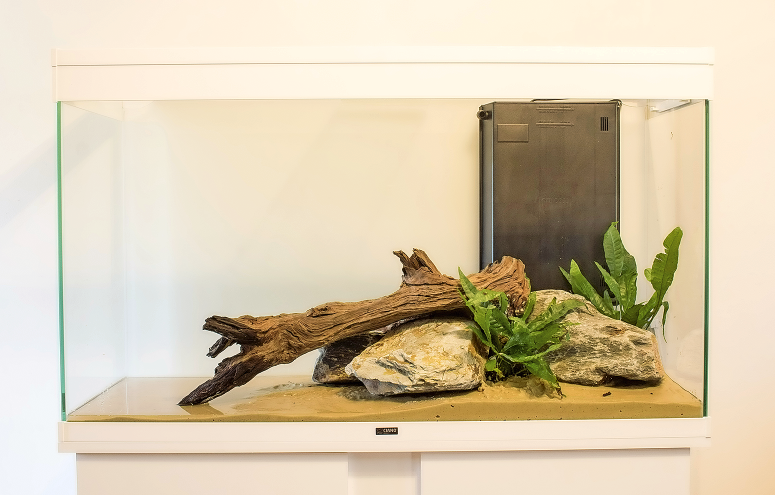 5. Large Java ferns are added. I’ve taken the unusual step of keeping them in their pots and adding them to the base of the tank instead of tying or adhering them to wood. The pots are not placed deep in the substrate, allowing the root structures to still uptake nutrients. Planting Java ferns into the substrate can cause the roots to suffocate and die off. 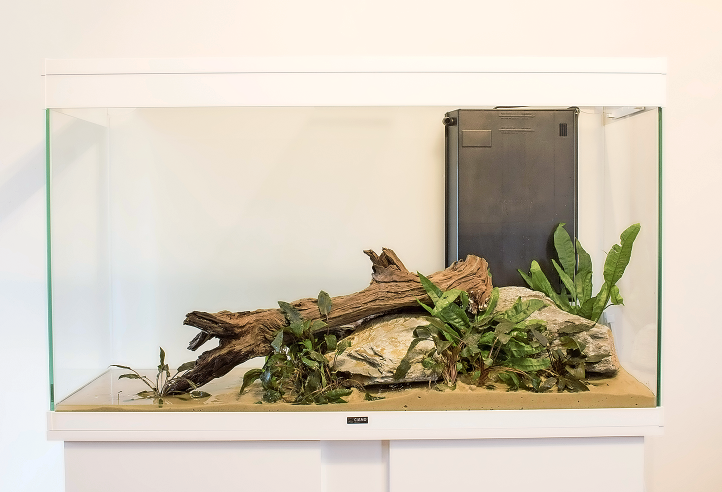 6. Mixed Cryptocoryne are removed from their pots, have their roots trimmed and tidied, and are planted. Crypts are notorious for ‘Crypt melt’ after transit, and we kept them in large clumps for the first few weeks to see how they settled in. Once happy they weren’t going to die, we later divided them up into smaller plantlets and spread them over a wider area.

7. The tank is filled with water, using a colander to stop the inflow from stirring up the substrate, and everything is turned on. As the heater is not visible (it is hidden inside the filter), monitoring with a thermometer and adjusting over the following days is essential to get to the right temperature. We ran this tank at 23°C/73.4°F.

The tank was matured using a mixture of ammonia, Evolution Aqua’s Pure Aquarium, and pre-seeded media hijacked from another aquarium. The cycle was rapid, just a couple of weeks before we were able to add fish, but this stage of the tank’s life requires scrupulous water testing to ensure that ammonia and nitrite levels are being controlled by the life support system.

Scroll down for a video of the finished set-up.

Which rocks?
The big stones used here were bought from a garden centre as rockery stones. Though dusty, we tested them with a little hydrochloric acid to see if they ‘fizzed’ and they did not, meaning that they do not contain any water-hardening calcium carbonate.

To float or not to float…
The wood we tried here was dense, perhaps the densest I have used in a tank. On this rare occasion, it did not require prior soaking, but you will likely find that any wood you use will need to be placed in a bucket of water for a week or two before use.

Alternative decor
The rounded rocks we used could easily be replaced by large flint cobbles. I’d be wary of using one of the large ‘resin type’ fake stones in this role, as these are hollow and you’ll soon have more Kuhli loaches inside it than out of it.

For wood, any of the hardwood types would be suitable. Oak or Beech would offer a tangled, fine-branched effect, while the aquarium staple of Mopani could bulk up an area in place of
the stones. 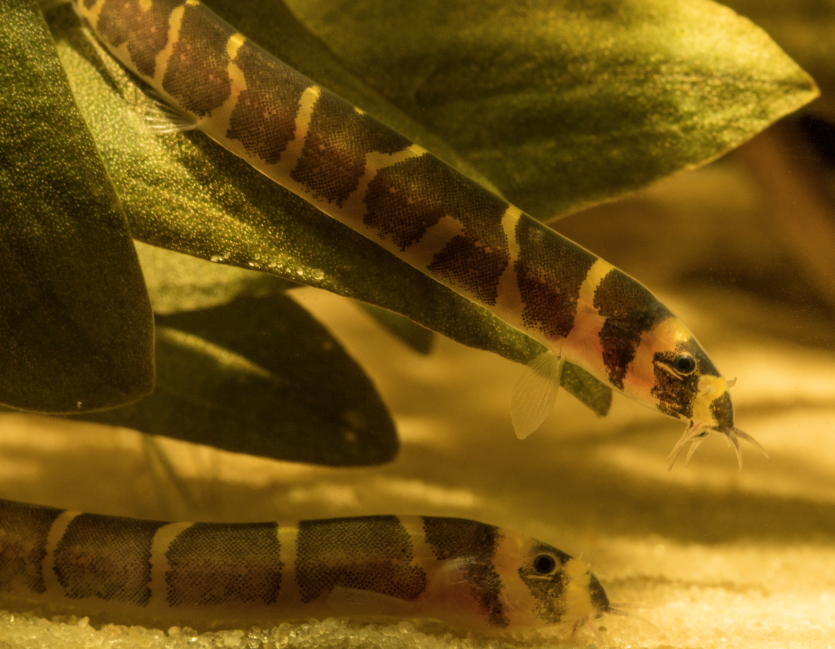 Kuhli loach
Kuhli loach, Eel loach — call ‘em what you will, but they’re one of the best wriggly beasts you’ll meet. Intensely shy, masters of hiding and burying, and diehard fans of bloodworm, just pray you never need to catch them in a hurry. They are far better at swimming than you will ever be at using a net…

Scientific name: Pangio semicincta (Pan-ghee-oh sem-ee-sink-tah).
Origin: Malaysia.
Habitat: Slow moving forest streams and static bodies of water, often acid-soaked and discoloured. Little, if any flow.
Water requirements: Soft, acidic water; 4.0 to 7.0pH, hardness 1–8°H.
Temperature: 21–25°C/70–77°F.
Feeding: Loves frozen and live foods like Cyclops, Daphnia, Tubifex and bloodworm.
Temperament: The most peaceful fish there is.
Availability and price: Widely available, starting from around £2.50 a fish. Buy in bulk for reduced prices. We bought 12 specimens for this set-up from the Waterzoo in Peterborough.

Orange finned danio
These are small fish that need a big tank, like many of the ‘danio’ varieties. Once settled, this has to be the brightest of the family, with its fiery orange flanks. Kyathits prefer tanks with plenty of plants, and if you can’t get lots of greenery then at least go for a dark substrate, otherwise you’ll end up with pale fish that hide their best colours away. Invest in some colour-enhancing foods and Calanus to keep those markings intense.