Quick change artistry in the aquarium James Starr-Marshall sets the stopwatch to create a completely new aquascape in under three hours.

My 20 l/4.4 gal tank had been running for more than nine months and although it had already undergone a change of planting and fish the hardscape had remained the same. It was time for a total re-scape! 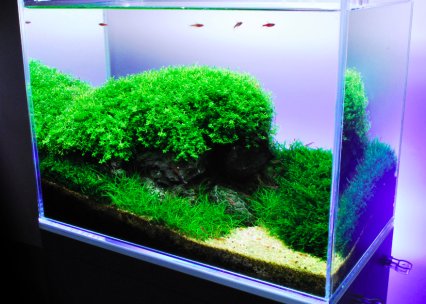 Maintaining maturity
The old set-up (pictured above) was in excellent health and, despite minimal maintenance, was algae free. This was partly due to the fact that over time I had found the right balance of light, CO2 and nutrients. Not to be under estimated, however, is the importance of a mature substrate as I’m convinced that the benefits are huge — particularly where plant health is concerned.

Given the right conditions an aquarium filter can be fully matured in four weeks, but it can take a long time for a full range of microbial life to establish itself in the substrate. Taking this into consideration, coupled with having no facilities to re-house my fish and shrimps, I decided to attempt the new 'scape while maintaining the maturity of the substrate and filter.

The concept
The idea for my new scape came, as always, from observing the terrestrial environment, but this time I had no definite image to work to. Usually I look at a landscape or natural feature then try to stylise and emulate it. This design, however, was born from a more general premise of a blind summit.

When approaching the crest of a hill at the edge of a valley, sometimes if the land on the other side is higher it can be seen before the summit is reached. The valley itself is hidden from view, yet the eye is still acutely aware of the distance between the visible areas.

Would be possible to recreate this effect in the restrictive depth of a nano aquarium?

To work, the idea would need attention to detail in several important areas.

The summit of the foreground hill would have to strike a strong, crisp line and have plenty of clear space between it and the planting beyond. Any hardscape material or plant on the far side of the valley should have a much finer texture than that on the near side.

The grown-in height of the chosen plants would also need to be accurately predicted to maintain minimal tolerances between foreground and background.

Then, if the plantings on the near and far sides of the valley were to have an obvious colour differential, it would help to reinforce the separation between the sides. With these creative criteria and the technical constraint of maintaining maturity, I got going.

How I set up in double-quick time... 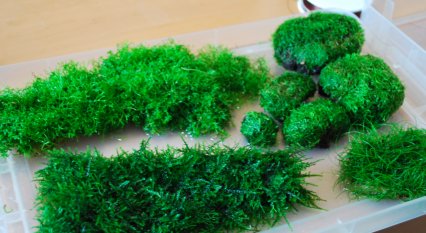 Preparing the plants
The bulk of the planting would be Riccia fluitans and Vesicualria ferriei (Weeping moss) as these could be removed from my current tank and prepared in advance of moving fish from their present home.

They are naturally floating plants, but best when attached to stones or wood. You can use ‘superglue’ type adhesive, cotton thread and fishing line, but I opted for hair nets.

I placed a thin layer of plant on the chosen stone and laid the net over the top. On picking up the stone the net could be gathered beneath and tied off with fishing line.

I tend to pull the net tight for moss, so that it will root to the stone. Leave it a little looser for Riccia so that new growth can develop under the net, as this plant will not take root.

The plants were prepared on a plastic tray and kept wet throughout the process, after which they were covered with a plastic bag to help retain moisture. 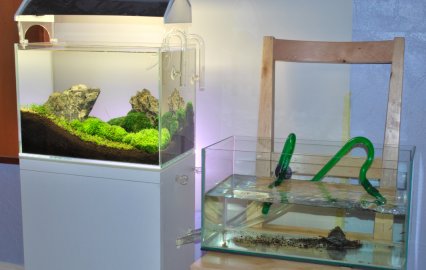 I now had a stable environment for my fish and shrimps while also keeping my filter bacteria alive. Once the fauna was moved and tank drained to below the surface of the substrate I figured I had some three hours before substrate maturity began to suffer.

At this stage I tried to keep as much of the remaining water as possible to help refill the aquarium. 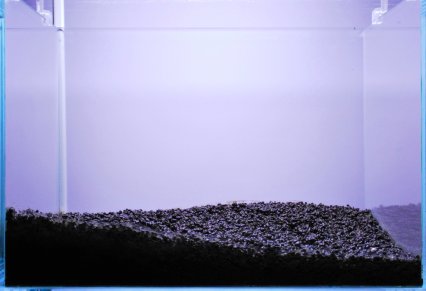 1pm
The first step in the creative process was to mark out the valley in the substrate.

The usual method of using a soft brush is inadvisable when the substrate is wet, as the brush will clog. Instead I used an old credit card, which is also useful for chopping up areas where the substrate has compacted. 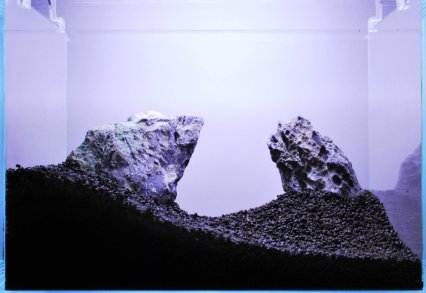 1:08pm
The main stones were placed, both of them Seiryu to keep consistency throughout the scape.

However, the surface texture of the rear stone was much finer and more detailed than that of the near. I hoped this would create the illusion of a mountain peak on the far side of the valley. 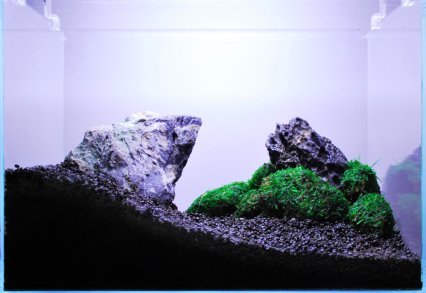 1:25pm
The pre-prepared moss stones were arranged at the rear to give the effect of a forest around the foot of the proposed mountain. I allowed for growth of about 1-1.5 cm/0.4-0.6” in height, to achieve the desired shape and proportions. Moss should be kept short to ensure the health of the plant. 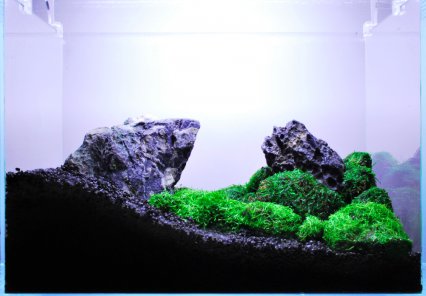 1:31pm
To create the summit of the hill I chose Riccia fluitans as this can be pruned to form a strong definite edge. I placed the Riccia stones along the edge of the valley, allowing for a grown-in height of 2-3 cm/0.8-1.2.”

If Riccia is pruned too short it can become a bit patchy and re-grow unevenly. 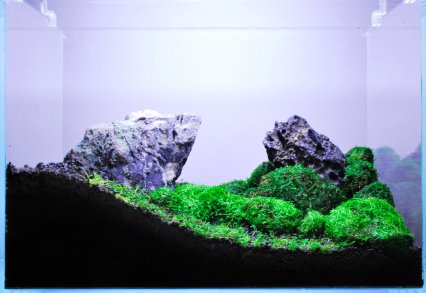 1:43pm
In the very foreground I planted some Hemmianthus Callitrichoides (HC) with tweezers.

With careful pruning I hoped to achieve a textural fade of HC to Riccia to further enhance the effect of false perspective here.

Riccia can be a very invasive plant so it will require regular pruning. 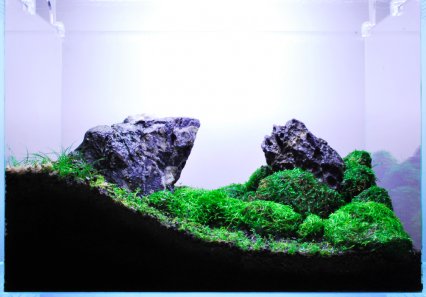 2:15pm
The last plant added was Eleocharis parvula, a short variety of hair grass. This was planted at the near corner of the main stone to clearly define the foreground. For the same reason, some sand and graded gravels were also added.

Happy with the design, I felt the scape was complete. 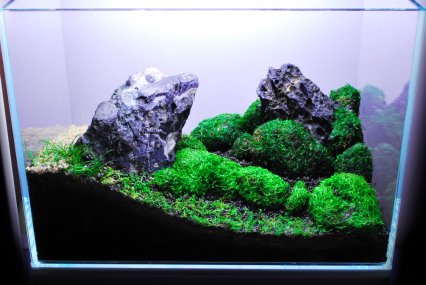 2:36pm
I used the saved water to slowly refill the tank via an air line hose, trying not to disturb anything. The main tank was about one-third full, so I switched off the filter on the auxiliary tank and used six of the eight litres there to further fill the main tank.

At this point I caught the fish and shrimps and returned them to their original home. There was no need to acclimatise them as I was using the same water.

I could now top up the tank with dechlorinated tapwater and return the filter to work on the main tank.

The fish and shrimps took a moment to explore their new surroundings, but settled quickly and soon looked as happy as they did before the change. I finished the project at 2.58pm.

So was it successful?
The tank was empty for one hour 58 minutes — and the total time taken, including plant preparation, was two hours, 52 minutes.

Technically the project was a complete success. I suffered no fish and shrimp casualties, proving that the filter had maintained maturity.

By the second week of the aquascape’s life I was convinced I had also maintained the maturity of the substrate, as I had not experienced the usual slime algae outbreak associated with a new tank. I experienced no algae issues during the entire ten weeks it took to grow in the ‘scape.

However, I felt the creative aspect could have worked better, as the illusion only worked when the tank was viewed directly from the front.

The fish threw the scale into disarray unless all were present at very front. Minimal tolerances between the height of foreground and background plants also became a pruning nightmare.