Freshwater and brackish Asian puffers dominate in the retail trade, but dare to keep them and they won't share their tanks with other communities. Neale Monks explains more.

Pufferfish from the Far East are all generally hardy and adaptable and those regularly retailed divide into four groups: brackish water species, target puffers, Green bottle puffers and dwarf puffers.

There’s variation in each one, but basic aquarium care and social behaviour tends to be consistent. They’re also all territorial and aggressive, so fit only for their own aquarium!

Of the groups, the dwarfs are small, cute and alert, but don’t have the same intelligence as the target puffers, and while these may be easily tamed they aren’t particularly active.

The Green bottle puffers swim all day, but are notoriously aggressive and fin biters.

The brackish puffers are generally more amenable to group life, but their need for brackish conditions makes keeping them complicated.

Some Asian puffers fall outside these groups; notably the Hairy puffer (Tetraodon baileyi) pictured above, Sea frog (Tetraodon cutcutia) and Milk-spotted puffer (Chelonodon patoca), but these are not often traded. 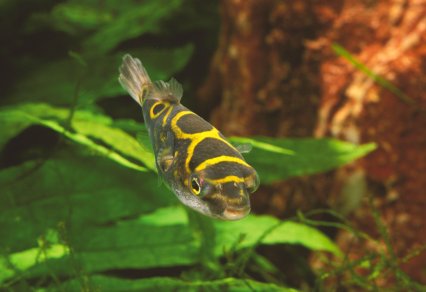 Pufferfish will not tolerate non-zero levels of ammonia or nitrite for long, but aren’t fragile and in many ways are easier to keep than oddballs such as spiny eels or stingrays.

Depending on species, filtration turnover rates from six to ten times volume in turnover per hour should provide adequate water quality.

Apart from the brackish water species, water chemistry is of no great significance and pH 6-8, 5-20ËšDH suits the Asians fine.

Puffers have huge appetites, but avoid overfeeding them. A healthy one will have a gently convex belly.

Variety is important because vitamin deficiencies are common when puffers are just fed one or two types of food.

Thiaminase is an enzyme in various meats that breaks down vitamin B1 and can cause nerve damage, reduce fertility and eventually death.

Foods with thiaminase include mussels and prawns, and these should be used once or twice a week. Some fish also contain thiaminase — notoriously goldfish and minnows — and represent another reason why feeder fish aren’t a good idea.

Stick with thiaminase-free foods and these include earthworms, snails, cockles, krill, lancefish, plaice, pollack and Tilapia.

Most puffers swim a lot and get nervous if their tank is too small. They become bored if there aren’t enough rocks and plants to investigate. Dwarf puffers, Green bottle puffers and the brackish puffers fall into this group.

Others are relatively inactive, the target puffers in particular happy to lie in wait for prey.

While a target puffer that gets to 15cm/6” long might be kept in as little as 115 l/25 gal, you’d want more space for a more active hunting species like the similar-sized Green spotted puffer — 180 l/40 gal or more being reasonable. 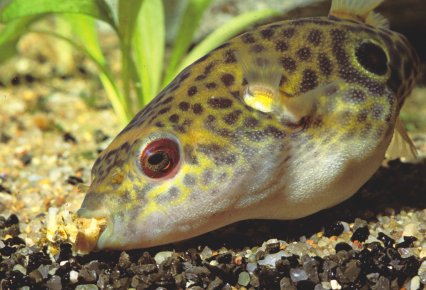 There are two important health issues. The first is dental work. All puffers should be regularly fed whole, crunchy foods such as shrimps, snails and mussels to wear down constantly growing beak-like teeth.

Any dental work  will involve sedating the fish by placing it in a container of aquarium water, into which two to four drops of clove oil per litre has been added, for 30-60 seconds. It’s then lifted out and teeth trimmed with cuticle clippers. The puffer is then put in a net, hung in the aquarium underwater until it perks up. This may need to be done every three to 12 months. (Editorial note: In the UK, this is likely seen as a veterinary procedure, as all animal dental work is. Ensure you are not breaking the law before doing this.)

Puffers will not tolerate copper and formalin, as well as organic dyes like malachite green. Salt is your friend because even freshwater puffers will tolerate brackish water for long periods. At 2g/l salt kills off the free-living stages of whitespot and velvet, while at 5-10 g/l, can treat slime disease and, to some degree, inhibit bacterial and fungal infections that might follow physical damage.

They tolerate saltwater dips and these can shift external parasites. 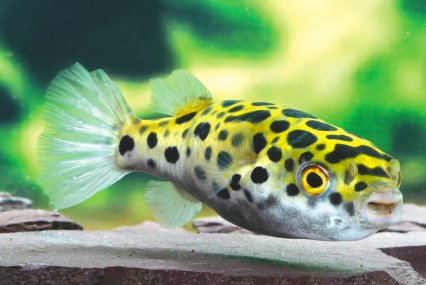 All brackish water puffers come from estuarine habitats with appreciable salinity, and will not do well in freshwater aquaria.

The biggest species are Tetraodon fluviatilis and T. nigroviridis, both known as Green spotted puffers, though the former is also known as the Ceylon or Topaz puffer.

As aquarium fish they’re a moderate size, 12-15cm/4.7-6” is typical, and intelligent — getting owners to feed on demand.

Aquarium care is not difficult provided brackish water with a specific gravity of at least 1.005 is provided for them

Mature specimens can be kept in marine aquaria, sometimes alongside boisterous species such as damsels and wrasses.

The Figure-8 puffer is 6-8cm/2.4-3.1” long and not particularly territorial or nippy. It gets along well with small gobies such as bumblebees.

The Latin name, Tetraodon biocellatus, refers to the two yellow circles on each flank between the dorsal and tail fins.

The Red-line puffer (Tetraodon erythrotaenia) is another small brackish water species and basic care is similar to that of the Figure-8 — but this is nippy and very aggressive, so needs to be kept alone. 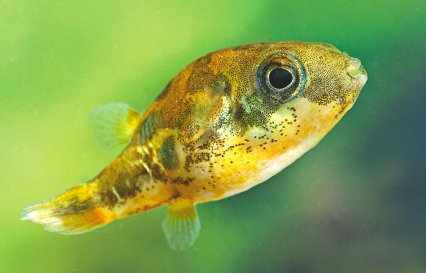 The Dwarf puffer (Carinotetraodon travancoricus) is the best-known member of its genus. Given its size of 2.5 cm/1” tanks as small as 25 l/5.5 gal are just about viable.

If kept in groups allow 15-20 l/3.3-4.4” per specimen and keeping two or more females per male will minimise aggression. These are territorial creatures and males will fight!

Juveniles and females are yellowish with irregular brown blotches and smaller brown spots, mature males have bolder brown markings and no spots, but do have blue squiggles around the eye as well as a dark band running down the throat and belly.

Dwarf puffers are nippy and best kept by themselves. 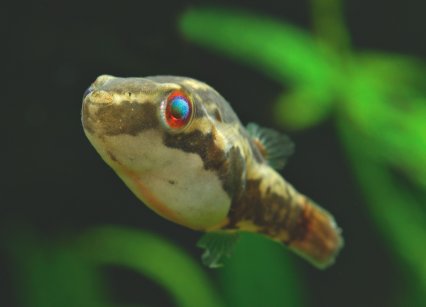 Both have red eyes, but whereas male Red-eyes tend towards olive green bands on a light brown body and a bluish tail fin, the Red-tail is chocolate brown with cream-coloured bands and has a red tail.

Females of both species are mottled brown, but female Red-tails have brown squiggles on their bellies. Female Red-eyes lack these.

Both species get to about 5cm/2”, but male Red-eyes are waspish, making maintenance in groups tricky.

Red-tails are mellow and I’ve had no problems keeping two pairs in a 180 l/40 gal aquarium.

These puffers are also fairly reliable additions to mixed species tanks, generally ignoring fast-moving barbs, tetras and loaches. This isn’t to say they never bite, but most specimens seem not to. 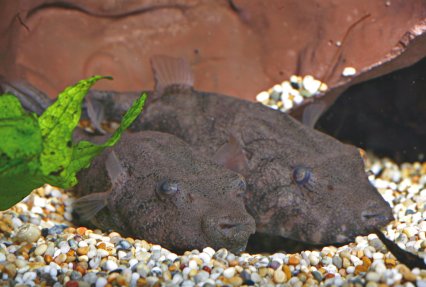 They are medium sized — the smallest about 8cm/3” long and the biggest nearer 20cm/8”.

Because they don’t swim much, they aren’t particularly demanding in terms of aquarium space, with 75-100 l/16 gal appropriate to smaller species and 150-200 l/33-44 gal for the larger ones.

Although most are territorial and snappy, the easy-going Mekong puffer (Tetraodon suvattii) – pictured above – has been kept in groups and even bred in captivity —  the males exhibiting well-developed brood care behaviour similar to that shown by cichlids. 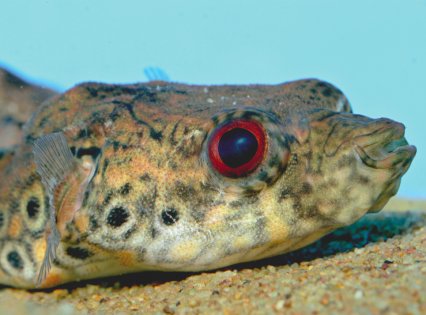 Both get to about 15cm/6”, but the Humpbacked has a distinctive profile, as per the name.

It also tends to lack the classic target puffer target on its flanks, though it does have circular black spots in the equivalent position. Both species have red eyes.

The Mekong is another hunchbacked species, but its coloration is drab and eyes dull reddish-brown at best. 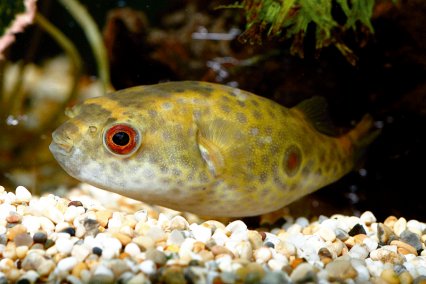 Often called the Fang puffer, Tetraodon cochinchinensis is an occasional import into the UK.

Essentially it is a scaled-down Tetraodon leiurus. At 8cm/3” it may be just as aggressive as its bigger relatives, but size makes it viable for a 75 l/ 16.5 gal tank.

The Brown puffer (Monotretus turgidus) shouldn’t be lumped with any of the Target puffers, but it’s similar in terms of size and requirements so is worth mentioning here. 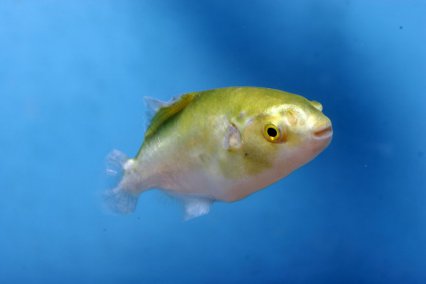 Sometimes called Green puffers or Golden puffers, Auriglobus modestus and Auriglobus silas are metallic green puffers that exhibit considerable lateral compression. It appears if they are being squeezed from side to side.

Telling the two species apart is essentially impossible, but their requirements seem similar.

Both get to about 8cm/3” long, both are busy and gregarious, becoming less active and less tolerant as they mature.

They are fin biters and cannot be kept with other fish. Both Auriglobus species are also prone to overgrown teeth.