Using thread-like fingers to scour the substrate for food, Polynemus may be the oddest fish you'll ever keep in your aquarium. Nathan Hill investigates.

With those long, whispy extensions jiggling smoothly over and around contours like a stylus over a record, threadfins could quite easily qualify as the all-time aquarium curiosity.

They carry the blank glaze of extreme concentration and watching them endlessly juggle their fin rays over the substrate it would be easy to imagine that they are indeed preoccupied.

It’s unlikely that many folk will have seen one of these in the flesh before, except those who have travelled and dined along the South Eastern coasts of Asia, where threadfins are something of a staple diet. If researching the fish, you’ll find more information regarding their palatability than their care!

Most threadfins destined for the table are of the marine variety. Spread over nine genera and comprising more than 30 species, Polynemidae is a large family of unusual fish.

Of those, only Polynemus is a known freshwater inhabitant.

Paradoxically, P. paradiseus, the species claimed to be the one most frequently imported for freshwater tanks, is more of an estuarine, marine, brackish/freshwater roamer, understood to spend time in fresh water while spawning before retreating to a more saline residence.

However, it takes just one look at some of the other species —true, lifelong freshwater dwellers like P. aquilonaris — to see that some of those imports may be far from correctly identified.

There are nine potential imports into the UK, although, in some cases, regional isolation and lack of exportation mean those species never make ten miles from home, let alone UK stores. Many will have been eaten, others used as fertiliser or dried out and fed to ducks. 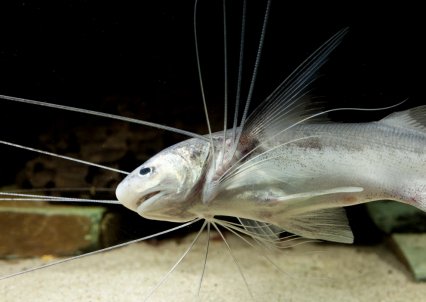 Wild Polynemus like to inhabit large, open areas. They are very much benthic roamers, dominating lower levels of rivers, pools and lakes, and rarely coming to midwater.

Key to their lifestyles are those awe-inspiring fin rays. Contrary to nonsensical belief, Polynemus are not catfish — not even closely related. Instead, Polynemus ‘whiskers’ are adapted rays from the pectoral fins.

Scrutiny reveals that the rays and fin proper are divided but continuous at the same time. Each ray points ahead of the fish before curling back on itself and each is separated at a flawlessly consistent distance.

Those rays rake across muddy or sandy substrates, sensing for amphipods, crustaceans and even small fish to eat.

Skeptics argue about just how sensitive those rays are. Most authorities seem to accept the presence of taste buds, although more maverick ideas include electro-detection attached to those long fingers. Given the way that Polynemus become frenzied as soon as food hits the water, it’s safe to say there’s more than physical receptivity at play.

Another feature of all Polynemus is incessant movement. They never stop swimming, completing endless circuits of their aquaria, often repeating the same path.

There’s speculation that they even ram breathe like some sharks, although this claim seems to be invalid as reported by some keepers who have had to restrain them for whatever reason.

Their constant swimming may be responsible for another adaptive feature that ‘s closer to shark than bony fish — an absence of swimbladder in some species. It would appear the bladders play little more than a vestigial role for species that are never still.

Any decorated tank is wasted on these fish. Instead, a massive, barren footprint is the way forward. Soft silt is impractical in the home tank, but sand should be of a fine texture, not sharp, for fear of wearing down those elaborate rays.

Threadfins generally don’t travel well, perhaps because long journeys confined to a bag cause them physiological stress, perhaps because of adverse reactions to high CO2, low oxygen, or build-up of ammonia.

Imported Polynemus seem sensitive to poor water conditions, struggling with even trace amounts of ammonia or nitrite. Whether they are inefficient breathers, and the chemicals simply exacerbate their laboured breaths, is anyone’s guess, but water conditions must be impeccable at all times.

Feeding is simple, although they sometimes require weaning from live foods when newly arrived. Persistence is key to getting them to take frozen foods, and soon they will eat a range of Krill, Mysis, Daphnia, bloodworm, small fish, as well as other assorted, meaty fare.

Depending on which species you end up with, an adult will be anywhere between 13.5-28cm/ 5.3-11” long. Ideally, a tank no less than 180cm/6’ should be used for the largest individuals.

Who’s who in the family?

The nine known Polynemus species are:

If you find a Polynemus in the UK, expect to pay anywhere upwards from £60 depending on the size. Identified species may cost more than this, but first you need to locate one!