Do your dreams of broad-beaked bottom dwellers come to nought? Most are too big for a life behind glass, but Nathan Hill finds a smaller specimen that might just 'fit the bill'.

The freshwater habitats of South America are amongst the most diverse and heavily life-fortified of any on the planet. Little wonder, then, that from time to time they should throw up curios and novelties that catch our attention.

Shovelnosed, or Duck-billed catfish of the Amazon are moderately well known, at least from a gourmet point of view. This subset of chunky, heavyweight pimelodids makes up a large portion of the fish marketed for tables on the South American continent, and why not? They are abundant, adaptable, and have even managed to encroach new territories on the back of damming activity.

For the aquarist, many shovelnoses are an unrealistic and fanciful dream. With sizes scaling up into the realms of several feet, the tank or pond sizes required to keep one of these 'big cats' is prohibitive, especially in price.

Sorubim lima, the classic or original shovelnose, sits on the fringe of the beaked collective, and keeping it confined to glass is not only feasible, but realistic, as long as liberties aren’t taken.

They are fast growing fish, so any attempt to house them must be committed from the offset. Though final adult size is contested – somewhere between 30/12” and 55cm/22” for a tank bound specimen – the galloping rate at which they get there is not. As a rule, it is less than usual for a lima to take over two and a half to three years of its predicted ten-year lifespan to stampede to full size.

The notion of small tanks acting as some organic pace car, slowing this growth rate down, is flawed, and attempts to keep these fish confined to tiny spaces will lead to stunted growth, and grossly overloaded biofilters. A fish that can weigh in at 1.3kg fully grown eats a lot, and what goes in one end…

There are five species in the Sorubim genus, though four of these are rarer than S. lima in making an appearance, or at the least being correctly identified and sold under the right name.

In its natural range, wide across the Amazon, and featuring in the Orinoco, Tocantins, Parnaiba and Parana basins (the last of which it has been helped to colonise through damming) S. lima overlaps some other species in its own genus, not just sympatrically, but syntopically.

Given that S. lima and S. elongatus are frequently found together, as are S. lima and S. maniradii, it would be more surprising if some of these other types had not made their way into the trade through accidental channels.

Across their conquered expanse, S. lima prefer to live in lowland regions, and are found in both lotic (river) and lentic (lake) environments, though they hands-down favour the former. 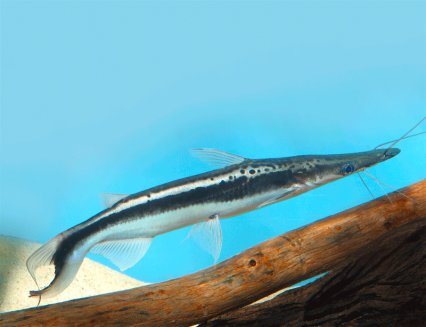 Ducks in the water

S. lima aren’t afraid of a little water movement when adult, and finding them in churning, fast flowing whitewaters is commonplace. Here, they dwell over a clay or mud substrate, becoming more active at night, and spending the daytime sequestered amongst the shadows of rocks, or hunkered down within a tangle of fallen branches or tree roots. When recreating a tank environment, though clay is impractical, a soft, fine substrate should be considered.

Temperature in their range varies seasonally between 23 and 30°C, though a constant anywhere between is fine for aquarium care. Typical pH at points of capture will be sat between extremes of 6.0 and 7.8pH, though neutral to slightly acidic conditions are favoured. Hardness needn’t be high, and anything up to and including 18°dH is tolerated, though lower is better. Oxygen should be exorbitant, to replicate those whitewater conditions, and dissolved pollutants need to be low.

Sorubim fare badly with any levels of ammonia or nitrite, and even nitrate levels above 20ppm can lead to the fish producing excessive amounts of mucous that then visibly slough off from the body. This is a warning sign to look out for, and always indicates something amiss in chemistry or quality of water.

Tankmates and feeding are open to some debate. Some keepers have got on well with a host of species alongside S. lima, while others report shy cats that are bullied away and become emaciated.

It’s a no-brainer that particularly aggressive fish like larger cichlids will intimidate most fish, though it’s also worth avoiding other night active species that are particularly outgoing.

Sorubim prefer to feed in subdued lighting, though long-term captives tend to feed at any time of day. In fact, a darker tank all round is suggested, and a perfect excuse to put an old T8 to use. Combined with tangles of wood and reasonable flow, this will create a home from home. 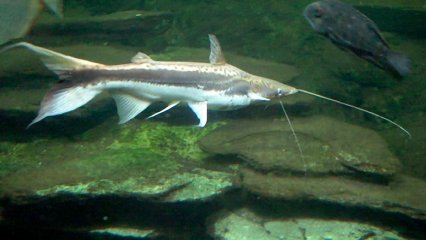 Feeding the ducks (Picture above by Sitron, Creative Commons)

Adults are out and out piscivores, and fish in the diet will never be turned down. Though our American counterparts are fond of using live goldfish, there are health ramifications, as well as legal ones in the UK. Besides which, live feeding with fish is entirely unnecessary.

Chunks of white and oily fish (this latter being messy, and only used sparingly) can be offered alongside other meaty goodies like prawns, squid, earthworm and bloodworm.

Juveniles prefer to focus on aquatic invertebrates and insect prey, moving on to eating fish when they hit 10cm/4” or so. If weaned from young, then it’s likely a Sorubim will even take multiple forms of dry food, and watching them quaff down all sorts of tablets and pellets over the years leaves me in no doubt to their ease of feeding.

Adults only need infrequent feeds, once every two or three days. They are not creatures of habit, and will happily go for staggered periods between chow.

When young, Sorubim cluster together in large numbers and take to living in thick beds of deep grasses, where they spend most of their time upright.

Given their superb camouflage at this point in life – their elongate black caudal lobes and whiskers making them look just like dead vegetation – it’s not clear whether their upright behaviour is defensive, or one of an ambush predator, or, most likely, both.

At this stage, they fill up on insects, crustaceans and other inverts, only emerging from the foliage as they switch to a fishy diet. However, a part of that ‘upright’ behaviour seems to stay with them, and they often headstand as adults. 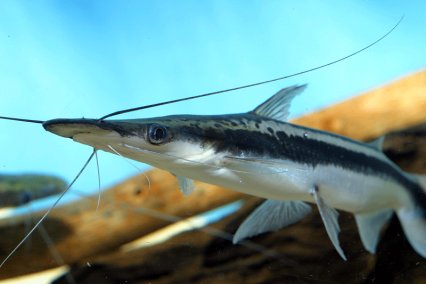 The latin name, like so many with fish, simply derives from the local vernacular for Pimelodid type catfish. With indigenous peoples calling all such cats Sorubi, it didn’t take long for taxonomists to latch on to it…

Why the long face?

Sorubim are instantly recognisable by that long, handsome proboscis, hanging from the front end like Popeye’s Alice the Goon.

Underneath resides a true cave of a mouth, ever hungry for any fish that can fit inside. The 'lima' part of their name actually translates as ‘file’ in reference to the abrasive inside surface of that gape, filled as it is with tiny, villiform teeth.

The snout is reportedly used to grub around in substrates to flush out prey, though this behaviour seems to be held back in most aquaria.

Like many catfish, it’s noted that Sorubim have weak electrodecetion abilities, and that shovel is peppered with ampullary sensors, such as those sharks and rays carry.

Combined with the vast, antennae like whiskers, these cats are well equipped to hunt down prey.

The final issue to be addressed if planning a lima of your own is the size of their home. These are social fish that prefer to be in small groups, and that equates to an increase in the size required. Seeing a solitary 30cm/12” specimen in a 120cm/48” tank is a sorry sight, even if the fish is relatively day-dormant.

For a group of three, I’d be considering a tank of around 300cm/10’ in length, with a width of 90cm/3’. Depth should be considered too, given their periodic headstanding antics. Anything over 50cm/20” should accommodate this reasonably.

As a parting thought, do consider the long term care of your Shovelnose. As hard as it is to anticipate what tomorrow might hold, if you’re in any doubts about economic stability, then maybe avoid them. If you find yourself unable to house one anymore, you’ll find both retailers and public aquaria unsympathetic. As for selling one on at adult or semi adult size – forget about it!

Sympatric fish are those that simply share a particular river, pond, lake, and so on, maybe passing each other by every now and then, or never meeting eye to eye, with one at the surface and one at the base.

Syntopic fish tend to live in exactly the same niche, so if a sand-dwelling riverbank inhabitant shares that exact territory with another species, the two are syntopic (as well as sympatric).