Predators: Hoplias, wolves of the water Piranhas are pussycats! The Hoplias of South America are the predators to really fear, says Oliver Lucanus.

No freshwater fish has a more fearsome reputation than the piranha, but, as many aquarists soon learn, these are actually quite timid. They get nervous when the aquarium is approached and prefer to bite pieces of other fishes’ fins rather than devour them whole.

However, South America is home to another group of fish that are far more voracious and much more aggressive. This is the family of the Amazon wolffishes and they have many names, including Trairão (sp.’Trai-ron’), Aimara, Guabina and Fasaco.

They are part of a characoid sub-family of 16 species, found from Costa Rica to Argentina in nearly every kind of water. Because the wolffish can breathe air it can survive where few others could. In the dry season it’s not unusual to find Hoplias the last survivors in an emptying pool.

The wolffish family has something for everyone: Hoplerythrinus unitaeniatus, the smallest, will reach just over 20cm/8”, while the largest (Hoplias aimara) will reach 130cm/51” and more than 30kg/66lb.

Despite their reputation wolffish can be good aquarium fish and are surprisingly interesting with other fish or in groups. Special rules apply, but these fish are hardy and easy to maintain. 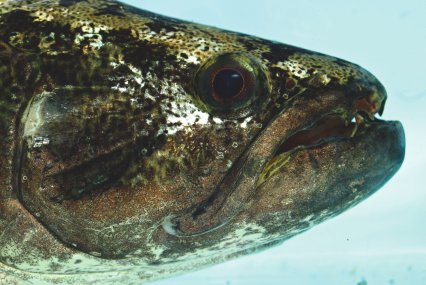 The sub-family consists of three genera, totalling 16 species. The largest group is the genus Hoplias with 11 species and we assume that H. aimara and macrophthalmus are separate species, although H. macrophthalmus may be a synonym.

Within their genus the species are similar and you’ll need to know where your fish were collected to have an idea of what species belong where. Brazil, Colombia and Venezuela don’t export their wolffish species, so the list narrows.

Several others are highly endemic and have rarely been exported. Assume that an aquarium wolffish belongs to one of five species.

Hoplerythrinus unitaeniatus is easily identified by its single horizontal stripe and elongate body, and exported occasionally from Peru and Colombia. It can be kept in a small school in a large aquarium.

Unlike Erythrinus and Hoplias these wolffish hunt in roving packs, cornering groups of smaller fish, especially characins, or chasing crustaceans and insects in the substrate or along the surface.

Their swimbladder is not as reduced as much as the other genera, so they are much more surface oriented and active than other wolffish. They can also do well in a community tank with other larger fishes such as catfishes, cichlids and larger characins, such as Myleus and Leporinus. 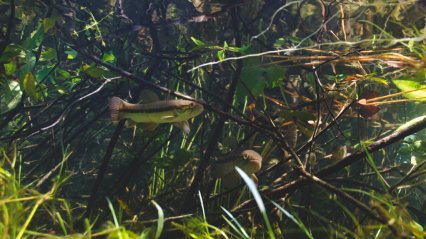 Hoplerythrinus will accept dry foods such as pellets, freeze-dried shrimp and insects, and sometimes even flake foods more readily than their relatives.

All wolffish are excellent jumpers and any aquarium must be covered at all times!

Hoplerythrinus also prefer flood zone habitats with mild or no currents and several hundred individuals can migrate deep into flooded plains or forests during the rainy season.

The other small species occasionally found in the hobby is Erythrinus erythrurus, often called the Redfin wolffish. Juveniles especially can show attractive red, yellow and even purple hatch marks on their flanks over an overall brown or burgundy body.

Margins of the unpaired fins can be bright red, yellow or white. The body shape is more stout than Hoplerythrinus and the swimbladder is reduced much further — to the point that the species swims in open water only when it wants to grab prey from the water column.

Erythrinus are more solitary, so groups require large aquariums with plenty of hiding places, allowing each fish to claim a territory. Short lengths of clay or PVC pipe make ideal caves for a relatively shy fish that may fight with conspecifics.

Fish that do not challenge them for territory and do not fit in their mouth are usually ignored.

Ideal tank mates are sturdy characins such as Myleus and Metynnis. Large-bodied cichlids such as Astronotus, Hoplarchus and Cichla also fare well.

Slow catfish risk having their eyes bitten when entering caves occupied by wolves.

Erythrinus will feed on live fish, crustaceans, worms and insects, and only slowly get used to frozen foods.

Erythrinus is found in swampy shoreline habitats and shallow clear or blackwater streams deep inside the forest. Besides insect larvae, all examined had Apistogramma, Moenkhausia and Nannostomus in their stomachs.

Most interesting are Hoplias. Usually only three species are exported for the hobby and most common is H. malabaricus, being widespread in both the Amazon and Orinoco lowlands and exported frequently from Peru.

Any wolffish bought in an aquarium shop will probably belong to this particular species.

Colour can range from mottled grey to brown and, depending on place of origin, almost black.

Juveniles are usually lighter and have bright yellow or green eyes.

In nature they are solitary, found in slow moving waters of virtually any habitat. The smaller the fish the shallower the habitat, and it’s not unusual to find finger-long H. malabaricus in less than 5cm/2” of water, stalking aquatic insects and small fish. As the fish mature they become less tolerant of each other and move to deeper water.

Adult H. malabaricus are not overly aggressive, but require a larger territory. Along riverbanks adults are usually spaced 3-4m/10-13’ apart.

As with all wolffish species, aquarium water chemistry is of little importance, as these fish can adapt to just about any common range of values.

Hoplias malabaricus are lazy, moving only when food is added to their environment. Juveniles will eat virtually any frozen or live food, but do well with frozen Mysis, smelt or cocktail shrimp.

They are often more active at dusk and dawn, so keep lighting subdued to allow them to show more activity during the day. Kept as a group of equal sizes they get along well until becoming sexually mature at 20cm/8”.

As they mature, females develop a more robust shape and rounded stomach. They will become increasingly intolerant until a pair has formed, then will usually get along well and lay close together.

Breeding can usually be induced by first dropping the temperature, raising it to 28-29°C/82-84°F and slightly dropping the level of water.

During breeding the male digs shallow pits in which 2,000-10,000 yellowish eggs are laid in a cluster. He guards the nest and larvae until they hatch and spread out in the shallow water to hunt small prey.

In the aquarium the young will immediately eat Artemia nauplii and grow rapidly, eventually cannibalising each other.

The newest member of Hoplias is also the second most imported species. It was known as Hoplias sp. Black for many years and described as Hoplias curupira in 2009.

This fish will occur sympatrically with H. malabaricus, but usually occurs in a different niche.

The body is more stout and less elegant than H. malabaricus and overall colour is a more uniform black or dark brown. The eyes are usually equally dark and less apparent. A maximum 30cm/12” size is considerably smaller than the 45cm/18” commonly reached by H. malabaricus.

Hoplias curupira are more aggressive, both to each other and towards the keeper. It’s is not unusual to find one approaching the front glass with flaring gills or viciously attacking any object used to trap them.

Large wolffish can cause deep cuts to a keeper’s hands. Handle them with the same respect as a powerful reptile of equal size. Such extreme aggression also means the fishes can be fed directly with large tweezers and the fish quickly learn to take large cocktail shrimp or smelt from them.

H. curupira will try to swallow fish almost up to their own size and may attack larger fish. When keeping them in a community aquarium choose only robust tank mates of considerably larger size. Breeding behaviour is not known in the aquarium, but likely similar to other Hoplias species. 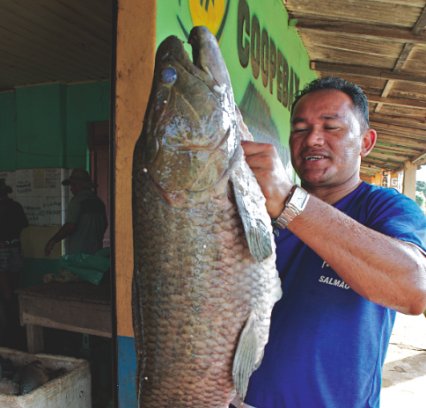 The most formidable Hoplias exported is the king of wolffish: the aimara, or trairão (Hoplias aimara and/or H. macrophthalmus). Juveniles and young adults sport a small black spot behind the gill cover.

It’s much larger and aggressive than the others and in nature is found in fast-flowing rivers and rapids where it preys on anything that moves. This species is absolutely fearless! 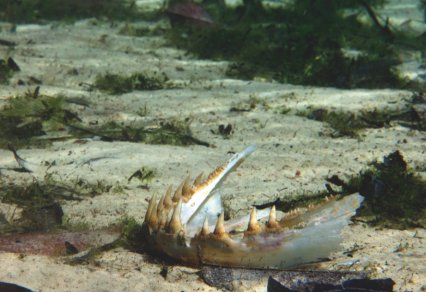 In the aquarium H. aimara is prized, but not easy to keep. Particularly large specimens will even hit the glass when the aquarium is approached, breaking their jaws, teeth, or glass itself. At over 30cm/12” they are difficult to keep — at over 100cm/40” they are best kept in acrylic tanks and left to experts.

Aimara have large and fearsome mouths and will attempt to swallow any other fish in the aquarium, including large loricariids, which their powerful jaws can break apart.

These monsters may also be kept together. If aquarium size allows, the animals are moderately territorial and will display to each other with flared gills and fins, but rarely bite each other. Pairs are formed at 50cm/20” and harmonise well together.

Nevertheless this species is best kept by experts who can handle the long-term requirements of these big fish. Unlike other wolffish H. aimara prefers fast moving water and can be more sensitive in bad water conditions. In low oxygen environment they become very intolerant of each other.

Moving adults can be dangerous because the fish will bite even out of the water and their 3cm/1.2” long teeth can penetrate most gloves and easily break plastic bags used in transport.