Be fully aware of what you're taking on if planning to keep a moray eel. They need minimal maintenance but that fearsome reputation is well earned. Dave Wolfenden explains more.

Moray eels are seen as creepy, scary or just plain cool — perhaps all at once. Yet some can be suitable for appropriate home aquaria.

Their general morphology, however, is an adaptation to a fairly sedentary lifestyle — being 'sit and wait' ambush predators.

Morays suffer a formidable reputation, which isn’t helped by their intimidating appearance. When ambushing, most poke their head out of their hidey-hole and expose fearsome fangs. This is simply the moray breathing, passing oxygenated water over its gills and out through the tiny gill openings.

Having said that, morays have been responsible for numerous ‘incidents’ involving divers, usually as a result of careless poking in the moray’s lair, or through hand feeding.

The legacy of a large moray’s bite isn’t pretty. Those needle-like teeth can cause severe damage and some victims have lost fingers, thumbs and sometimes more as a result. There’s the additional risk of aggressive secondary infection, courtesy of a mysterious cocktail of bacteria in the eel’s mouth.

Avoid hand feeding. They can move exceedingly quickly and their poor eyesight means they can’t readily distinguish between food and fingers. So use a feeding stick, or, better still, tongs when feeding and always keep your wits about you.

Feeding twice a week should be more than adequate for most adults and around three times a week is fine for youngsters. It’s not unusual for new acquisitions to go on hunger strike for several weeks after introduction to new quarters, so it may be necessary to train the moray onto captive diets.

Regular presentation with feeding tongs — and a lot of persistence — may be necessary. It’s rare for them to starve to death, so keep plugging away until they feed! 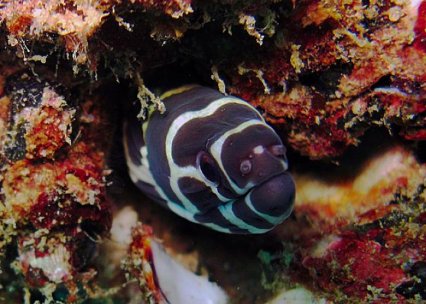 They need space!
Despite their sedentary nature, morays demand a lot of space and smaller species can be kept in systems at a minimum 250 l/55 gal. Larger morays require correspondingly sizeable housing and I wouldn’t consider keeping a Leopard moray (Gymnothorax favagineus) in an aquarium less than 1500 l/330 gal.

Aquascaping must take into account natural habits — so incorporate some lair, which could comprise some carefully arranged rockwork. Be warned, however, that morays are extremely strong, so a lovingly constructed cave can rapidly become rubble. Fixing rockwork with epoxy putty can provide a solution.

A more elegant method of creating a suitable captive habitat is to employ flexible plastic drainage pipes. These can be cut to length, bent to shape and incorporated into the rockwork. Both ends should be exposed to permit adequate water circulation and prevent build-up of stagnant areas or collection of uneaten food or detritus.

The pipes could be embedded in the back wall of the aquarium, or a series can form the basis of a central rockwork feature on the base of the tank.  A little planning and creativity can help to make an attractive display which any self-respecting moray will love.

Lighting can be relatively subdued to ensure the moray is on display as much as possible. Intense metal halide lighting can simply encourage specimens to hide.

Secure the lid of the tank firmly. Morays are escape artists, as I know. Picking a crispy moray from the floor isn’t gratifying, so ensure any gaps are sealed.

An eel can use its tail and powerful, muscular body to lever the lid off a tank, so it will need to be sturdy. Public aquariums keeping the larger species may even bolt on their lids! 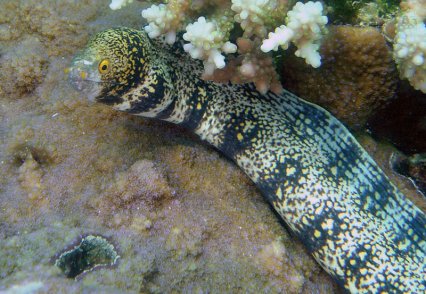 Water quality
Even the smallest species is a relatively large fish compared to most other species commonly kept and, as such, their feed input and waste output is pretty prodigious. Filtration must cope with the large quantities of solid waste these fishes generate, so mechanical media needs to be suitably efficient and cleaned regularly.

Consider the quantities of ammonia that can be generated — and that includes potentially dangerous ‘spikes’ after meals. Extremely efficient biological filtration is also a must, with an adequately sized external canister or trickle filtration being ideal, and ensure a high turnover for adequate oxygenation.

Don’t even consider a moray without a preferably oversized protein skimmer. As an additional tool for water quality ozone could be considered, in conjunction with skimming, to deal with the high bioloading these fishes are capable of exerting on the filter.

Monitor alkalinity and pH, as it’s easy for values to fall outside optimal with a high biomass. 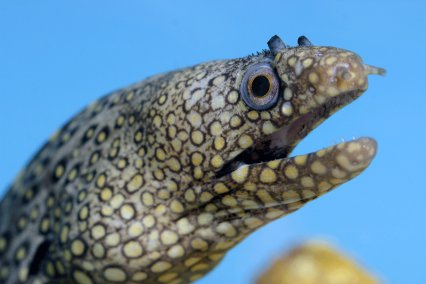 Healthcare
Morays are happy with minimal healthcare and, once settled in, are hardy. In fact, providing filtration is up to the job and water quality is optimal, these are among the most bulletproof of marine fish.

These eels respond poorly to copper-based treatments, presumably because of their scale-less skin. They rarely suffer from whitespot or other parasitic diseases in any case, but alternative treatments should always be sought and care taken not to overdose with any remedy.

Bacterial conditions may occur, especially if trauma is sustained during handling and transport or if water quality dips, and they respond well to antibiotics. Always quarantine new specimens.

When selecting stock, try to undertake a thorough inspection of the whole animal. This may mean asking for it to be coaxed out of its hiding place in the dealer’s holding tank. Check for physical damage, for example around the mouth, and signs of eye cloudiness.

What to feed
Morays diet varies. They’re all carnivorous, but some require a crustacean-based diet while others will favour fish or squid.

The greatest clue to any species’ diet is dentition. Crustacean feeders tend to have flattened teeth for grinding and crunching hard-shelled invertebrates, while the needle-like teeth of piscivorous species are used for spearing and gripping slippery prey.

Whatever the diet of your chosen species, variety is important. Specialist crustacean feeders should have a range of prawns and crabs. Piscivores will benefit from a mix of frozen fish species as well as squid. Vitamin supplementation should be considered for all morays to prevent dietary deficiencies.

Tank mates?
Tank mates should vary, depending on species and diet and smaller, crustacean feeders can co-habit with a range of fish species and sessile invertebrates, although they may eat very small fish.

Larger, more predatory morays need to be kept in either a species aquarium or with robust, aggressive or semi-aggressive species. Porcupine fish, puffers, lionfish and triggers can be good choices of companion — providing they’re not meal-sized. 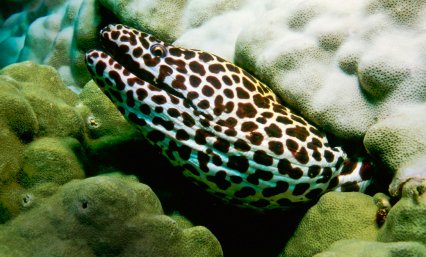 Which system is best for them?
Can morays be maintained in a reef system? It’s possible for the smaller species, notably the Snowflake, Echidna nebulosa, but filtration still needs to be able to cope with relatively high waste outputs.

For larger morays, such as the Leopard, Gymnothorax favagineus, maintaining water quality suitable for invertebrates becomes much more of a challenge.

Realistically, you’ll want to consider these specimens for a fish-only system and species or mixed large ‘predator’ set-ups will be the best route.

Can I breed moray eels?
Morays have yet to be successfully bred in captivity — and for a pretty good reason. It’s down to a bizarre planktonic larval stage, known as the leptocephalus, which the juvenile eels assume as they drift for weeks or months before metamorphosising.

Providing conditions for successful development of the leptocephalus stage in captivity represents a huge challenge, and it looks as if captive moray breeding will elude us for some years yet... 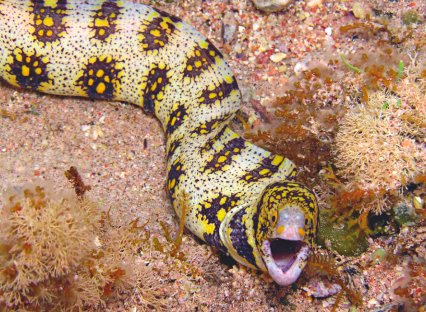 Meet the family
...or at least some of them. Only a handful of morays are commonly available in the trade and the large nature of most species precludes them from being kept.

Here’s a selection of some suitable and not so suitable species you may find a home for:

Justifiably the most popular species in the hobby is the Snowflake eel, Echidna nebulosa (pictured above by Prilfish, Creative Commons) from the Indo-Pacific and Eastern Pacific.

This beautiful, hardy species has plenty to recommend it, growing to a manageable size and rarely reaching over 50cm/20”. It’s a crustacean feeder and, provided there are no crabs and prawns in the aquarium, they are peaceful. Just ensure any fish tank mates are not mouth-sized — just in case!

In fact, it’s possible to maintain Snowflakes in reef systems, providing your filtration is up to the task. They won’t bother sessile invertebrates, but some creative aquascaping will be required to provide them with a dimly lit lair if keeping them with light-loving animals.

The Zebra moray, Gymnomuraena zebra, has a similar distribution and grows to around 90cm/35” in captivity. It’s another crustacean feeder and generally peaceful mixing with larger fish species.

Their size makes them less suitable for reef systems than the Snowflake, with fish-only being the set-up of choice. Obviously, don’t keep them with any crustaceans either! 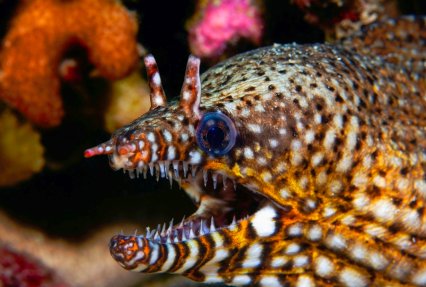 Many aquarists covet the Dragon moray or Japanese dragon eel, Enchelycore pardalis (pictured above) and it’s easy to see why. With its psychedelic mottled coloration of orange, black and white and its prominent nasal ‘horns’, this is a real stunner.

Hailing from the Indo-Pacific, it is a piscivorous species, reaching around 60cm/24” in length, sometimes more. 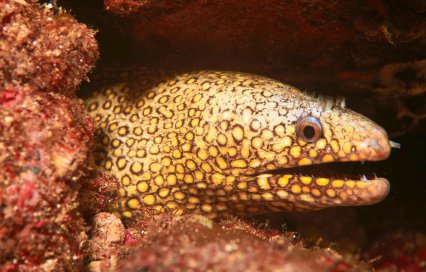 A ‘budget’ alternative is the Mexican dragon eel, Muraena lentiginosa (above) from the Eastern Pacific, and it’s another piscivore. While not as attractive as the ‘true’ dragon eel, it is still handsome, attains a similarly manageable size but has a far less hefty price. 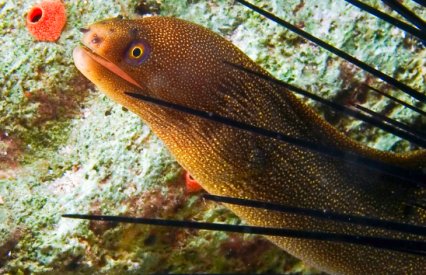 Many Gymnothorax species are just too large and aggressive for most hobbyist systems, but a few are suitable for those with enough space and equipment. The Golden eel, Gymnothorax miliaris (pictured above by Nick Hobgood, Creative Commons) is an attractive species from the Western Atlantic and it grows to around 70cm/28”.

It’s occasionally offered in the trade and is a particularly good choice. Feed a varied diet of frozen, supplemented fish and squid to make this eel happy.

From the Indo-Pacific, the Leopard moray, Gymnothorax favagineus,  is a hardy predator, but bear in mind that these grow to well over 80cm/32” in captivity. They’re also very girthy and capable of producing prodigious amounts of waste.

These are probably the largest morays that could reasonably be considered for the hobbyist.

They are relatively easy to maintain, but need to be kept in very large systems with robust tank mates and efficient filtration. Feed squid and fish twice a week —and mind your fingers at all times! 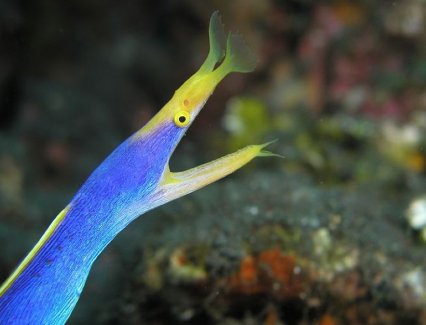 The Ribbon eel, Rhinomuraena quaesita (pictured above by Chika Watanabe, Creative Commons) is one to avoid. With its bizarre nasal extensions, it certainly looks fascinating enough, but Ribbon eels are difficult to maintain, with starvation the major cause of death among captive specimens. Some success has been reported with those in public aquaria — but pretty dismal survival rates are the norm.

Thoroughly research and identify any specimen before committing to ownership. Various unusual species occasionally turn up in the trade and positive ID is essential to determine potential adult length. Some reach hefty and downright unmanageable sizes — often with aggressive dispositions.

Just because a specimen is offered for sale, don’t automatically assume it’s suitable for the home aquarium. You have been warned!