Any retail price index for marine puffers may be high, but you get personality and intelligence for your investment. Dave Wolfenden reveals a high interest rate for these gilt-edged fish.

What makes marine puffers among the most endearing aquarium fish? Is it their crazy behaviour or amazing adaptations? How about their out-and-out personality?

These fish have a lot going for them — but, before plumping for a puffer, be aware of what you’re taking on...

Their families include Tetraodontidae (the 'true' puffers) and the Diodontidae (technically porcupinefishes and also including burrfishes). There’s also a related family, the Triodontidae, comprising solely the bizarre Threetooth puffer (Triodon macropterus) which is rarely seen in the hobby.

The morphology of spines covering the body also differs. In porcupinefish these tend to be more developed and prominent, hence the family’s common name.

Regardless, all these fish are highly evolved and extremely specialised in terms of biology. They are, of course, famed for possessing Tetrodotoxin (TTX) — one of the most potent neurotoxins known to science.

This is found in the organs, such as the liver and ovaries, and probably synthesised by endosymbiotic bacteria passed along the food chain.

However, puffers raised in captivity seem to be non-toxic, appearing to confirm that the TTX is externally produced. 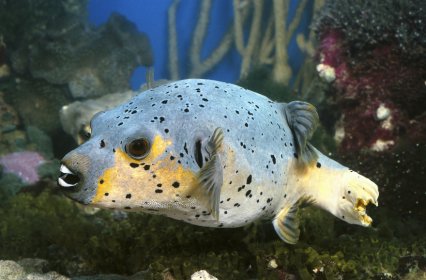 A specimen in a holding tank should appear active and alert. Check skin and fins for signs of trauma during transport and avoid any physically damaged fish. If the specimen appears in good condition, go for it — but quarantining any new additions is highly recommended.

Puffers and porcupinefish are generally pretty hardy, but can be vulnerable to parasitic infections such as Cryptocaryon due to their thin, sensitive skin, although conventional copper-based treatments will help to clear up these problems.

Some species appear susceptible to eye infections, which seem to result from prolonged exposure to sub-optimal water quality. 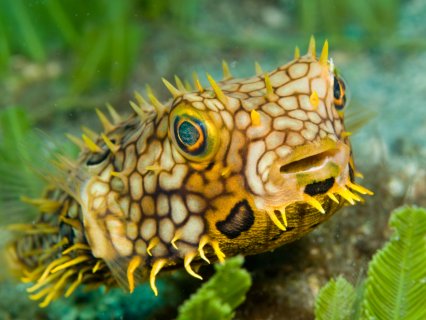 When puffers or porcupinefish are moved they are liable to inflate themselves – and porcupinefish particularly can become easily entangled in nets.

It’s also best to avoid lifting them out of the water, as they are liable to take in air, which can cause problems.

Coax them into a bucket, beaker or other suitable container underwater for lifting, eliminating the need to expose them to air.

It’s inevitable that the fish will find the capture process traumatic, but try to minimise stress levels by dimming the lights and reducing handling time.

Despite their often tough appearance, be fully aware of that extremely sensitive and flexible skin. For this reason, puffers are susceptible to damage during movement and they often fare badly with cleaner wrasses (Labroides spp.). Overzealous cleaners can cause nasty wounds, which are prime sites for secondary infections.

Companions need to be chosen fairly carefully, but get it right and most puffers and porcupines are as good as gold.

The smaller puffers have a reputation for fin nipping, so should only be housed with suitably robust species.

Larger puffers and porcupinefish can be extremely aggressive with conspecifics, or even heterospecifics of a similar appearance, so limit stocking to one member of each genus and limit all other tank mates to aggressive or semi-aggressive species. Larger tangs, groupers, eels are good choices.

The smaller Sharpnosed puffers (Canthigaster spp.) require 150 l/33 gal or so in volume. The ‘medium’ puffers, such as Arothron meleagris or Diodon holocanthus, should have an absolute minimum of 500 l/110 gal, preferably double.

As for the largest, such as the Map puffer (Arothron mappa) or the Common porcupinefish (Diodon hystrix), even 1,000 l/220 gal is probably insufficient.

It’s vital to positively ID a specimen and determine a good idea of potential adult size.

Larger species demand efficient filtration. Due to their sheer bulk and large appetite, puffers and porcupinefish can generate inordinate waste and contribute huge inputs of ammonia and solid waste to the system.

This issue can best be dealt with by a combination of strategies. Highly effective and regularly cleaned mechanical filtration can help limit the effects of solid wastes. Aggressive protein skimming, preferably via an oversized skimmer and maybe utilising ozone, is a must and efficient biological filtration vital.

These are intelligent fish, benefiting from a suitably complex environment to explore. Ensure plenty of rocky aquascaping, perhaps with lots of rubble thrown in for good measure. Caves and overhangs will also be appreciated.

As for housing in a reef aquarium, don’t even bother with the larger puffers and porcupines.

However, the Sharpnosed puffers can be worth a punt, but still risky. For the best chance of success avoid SPS corals, smaller brittle stars and other bite-sized inverts in the same tank. 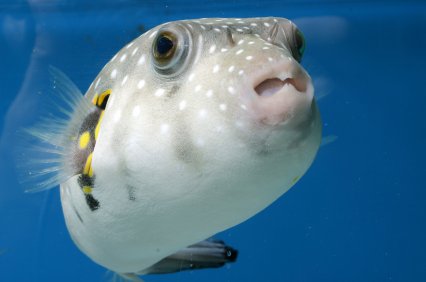 The Sharpnosed puffers require frequent feeding, especially in traditional fish-only set-ups which provide limited invertebrates and algae for them to rasp from the rocks. Chopped prawn, cockle, frozen Mysis, algal feeds and flake should all be offered twice a day.

The larger species from the Arothron, Diodon and Chilomycterus genera should be fed less frequently, with adults perhaps only every other day.

Overfeeding is a big problem with puffers, so don’t respond to their inevitable begging behaviour.

Larger fish should be offered hard-shelled fare, such as cockles and mussels, frequently to wear down their ever-growing teeth. The consequences otherwise could mean dental surgery.

Can I breed any puffers?

As for captive breeding, these fish are extremely challenging and there are no reliable reports of any successes.

However, in Japan there’s ongoing research and some promising work into pufferfish breeding, particularly Takifugu, for the lucrative aquaculture industry there. 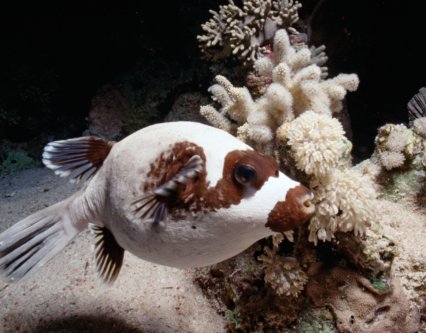 Larger puffers can make light work of the crunchiest invertebrates and also trash their aquariums! Make sure vulnerable items, such as thermometers and electrical cables, are well out of reach of those fearsome teeth!

A persistent rumour claims that these fish can only inflate themselves seven times before they die. What nonsense!

While puffing up is a sign of fear or stress, experience shows that puffers are not rigidly limited to a finite number before they expire.

Even so, never encourage a puffer to inflate. Despite the rather comical appearance, unnecessary 'puffing' may be a traumatic experience.

The Canthigaster genus comprises the Sharpnosed puffers or Tobies which are easily identified by their elongated snout and relatively streamlined bodies.

These are the more diminutive puffers and the choice for smaller systems. However, tank mates should not include any with trailing fins as these fish are notorious fin nippers. 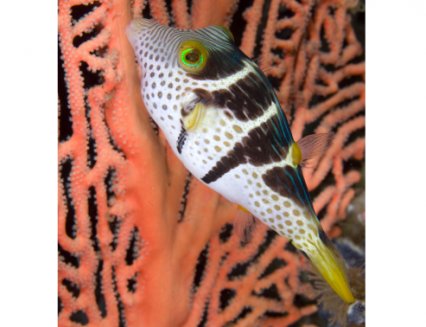 Often on sale is the Jewel puffer (C. solandri) from the Indo-Pacific with its attractive 'spots and stripes' coloration and the Valentini puffer (C. valentini) — pictured above — another Indo-Pacific species. Each reaches 11cm/4.3”.

This species is expertly copied by the creatively named Mimic filefish (Paraluterus prionurus) which exploits the natural aversion that predatory fish have for the toxic puffer.

Occasionally encountered is the Hawaiian (C. jactator) with its striking coloration of white spots on a brown background. This grows to 9cm/3.5” in length. 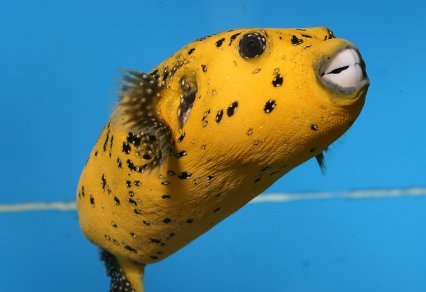 The Dogface puffers of the Arothron genus always provoke a reaction. Some aquarists love them, many find them creepy. I think they’re great!

All Dogface puffers reach a considerable size, in terms of girth as well as length, and they make a proportional amount of mess!

The Spotted or Guineafowl pufferfish (A. meleagris) from the Indo-Pacific is found in a number of colour morphs, with a stunning 'golden' morph commanding a considerable price. Expect this species to reach around 20cm/8”.

Also worth considering is the Panda puffer (Arothron diadematus) from the Western Indian Ocean. It has distinctive 'mask' markings and attains a similar size in captivity. 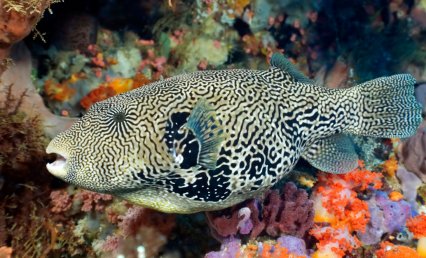 Do some research before buying any specimen — and take the bizarre Map or Scribbled puffer (Arothron mappa) from the Indo-Pacific, for example.

This species often rapidly outgrows its system and can reach around 60cm/2’ in length! This is best left alone, unless you have a huge system, so choose a smaller species instead if you’re set on a Dogface. The Map is not even the largest of the genus!

Arothron stellatus, the Starry puffer from the Indo-Pacific, is a mighty beast, reaching some 1.2m/3.9’ in the wild, and is definitely best left to enjoy life in public aquariums... 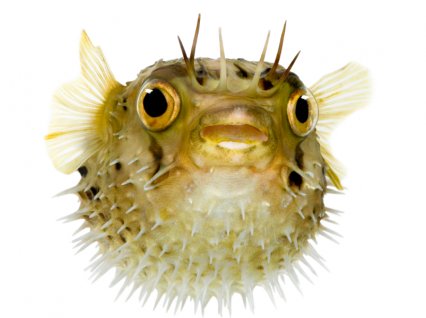 The most frequently offered porcupinefish is the Long-spined (Diodon holocanthus). Having a circumtropical distribution, this charismatic fish reaches 30cm/12” or so in captivity.

This species is prone to eye infections, however, which can lead to permanent blindness, so maintain good water quality to prevent such issues.

Otherwise, this is a rewarding fish which should live for many years

The Common porcupinefish (D. hystrix) is also circumtropical and a little less outgoing and more cryptic than the previous species. It grows large though — up to nearly 1m/3.3’ in the wild!

Captive specimens are considerably smaller, but large aquariums are still needed as any captive can reach at least 30cm/12”, possibly a lot more.

The Bridled burrfish (Chilomycterus antennatus) from the Western Atlantic is occasionally seen and it grows to some 30cm/12”. This species is readily identified, thanks to its prominent head-mounted 'horns'.

Also from the Western Atlantic and reaching a similar size is the Striped burrfish (C. shoepfi) with its distinctive wavy markings enhancing a very attractive species.