Mantis shrimps can be the stuff of either dreams or nightmares, depending on your point of view. John Clipperton looks at the spearers and smashers.

Few creatures can inspire both awe and dread in equal measure among reefkeepers than mantis shrimps. However, these incredibly interesting creatures deserve our respect and are remarkable for so many reasons.

As marine crustaceans of the Stomatopoda order they are neither shrimp nor directly related to terrestrial ‘preying’ mantids. With over 500 species in this order described some have reached well over 30cm/12” in length. However, the behaviour of even large specimens is little understood.

Their cryptic, aggressive and often solitary habits are doubtlessly the reason, as they are widespread and numerous in many shallow water marine habitats, both tropical and temperate.

Spending much time hiding in rocky areas or lurking in burrow complexes in the sea floor, they ambush or even co-operatively hunt and kill living prey. Some species have taken on the venomous blue-ringed octopus as this is a spicy treat if suitably immobilised!

Depending on species, they can be diurnal, nocturnal or crepuscular and, based on anatomy and hunting behaviour, can be classified as either ‘spearers’ or ‘smashers’.

Many species live in shallows of tropical seas and we are most likely to encounter some of these either in shops or as hitchers on live rock.

Occupying such niches, mantids have become the ultimate assassins of their world and have a deadly array of weaponry based on the development of their raptorial claw. 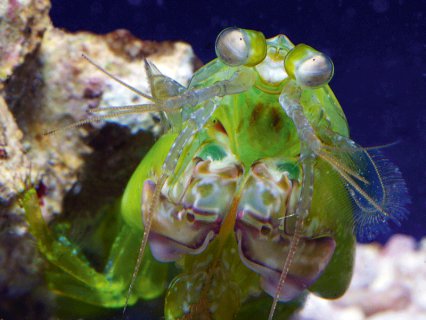 'Spearers' have rapier-like appendages often with barbed tips or serrated edges which impale or clasp and disembowel prey. Such species are typically ambush predators that lurk in burrows made in soft substrates and feed on soft-bodied prey, including fish.

'Smashers' exhibit more club-like claws, which can still have sharp edges for cutting. After tackling prey in the open, the shrimps use these to pummel and dismember hard-shelled food like crabs.

Regardless of the equipment, the force and speed of strike movement is perhaps what makes this 'smash' weaponry even more impressive.

Due to a saddle-shaped 'click-joint' structure, a mantis is able to ‘cock’ its raptorial limb. Driven by powerful extensor muscles, much potential energy in the upper part of the limb can be created before and release during a strike.

The strike of some species is one of the fastest movements in the animal kingdom, with acceleration rates equivalent to the firing of a .22 calibre bullet.

Cavitation bubbles between the appendage and striking surface are produced and the collapse of these bubbles produces additional forces on the prey, resulting in a phenomenon known as sonoluminescence whereby a tiny amount of light and temperatures of several thousand degrees Kelvin are produced within the collapsing bubble. Pistol shrimps produce this effect in a similar manner.

Such weapons aren’t much use without a targeting system to match and stomatopods have the most sophisticated visual system of all animals.

Each compound eye is made up of up to 10,000 separate lenses. A central region (midband) divides the eye into three, enabling the mantis shrimp to see objects with all three different parts of the same eye. So basically, trinocular vision and depth perception are possible in each eye!

The areas above and below the midband of each eye are used for recognition of forms and motion but not colour vision. However, the midband of a mantis can contain up to 16 types of photoreceptors, with 12 for colour analysis alone.

As a result, stomatopods can see polarised light, four colours of UV light and may also be able to distinguish up to 100,000 colours — that’s ten times the range of human beings. Backing up this 'hyperspectral' vision, groupings of special muscles allow the eyes to move independently across a wide field of view. This allows the mantis to build a detailed picture of its surroundings and efficiently identify and track predators and prey.

This visual system is also known to play a key role in a range of mantis behaviours; from conflict avoidance to courtship. Some species use fluorescence to signal in deep water.

Thanks in part to these skills and survivability, small ‘smasher’ specimens occasionally survive transit and hitch into aquaria in pieces of live rock. Their presence can often be established by sounds of their activities, as well as visual confirmation. To view species that hitch into tanks, using a red torch at night may offer the best chance.

Relatively harmless pistol shrimps can often be mistaken for stomatopods as they make a similar noise. They make an occasional single 'snap' while a 'smasher' mantis attack will normally be heard as a rapid series of thuds!

If a mantis is found in a tank, rather than viewing it as a disaster think positive. It may be an unusual or even undescribed species!

However, to try to avoid such a situation when setting up a new reef tank, allow a couple of weeks with only live rock in the tank.

This not only identifies organisms that may need removal, but also enables the tank to cycle properly. Catching such creatures with a trap, or by removing rockwork for a low salinity dip, may be necessary and requires patience, skill and luck! Having just rock in the tank makes either method far easier.

Once caught, if the creature cannot be ‘sumped’, consider asking if a local store will take it. However, mantis shrimp often sell quickly on reef-related Internet forums. They can make fascinating subjects — but large ‘smasher’ species can break even thick aquarium glass!

If setting up specifically for a mantis, depending on the species, there are things to do to optimise the system.

After considering construction and size of tank, include the right kind and depth of substrate for the species in question as they need to go burrowing.

High light intensity is not necessary. Instead efficient filtration should be paramount and designed to deal with messy feeding, stirred-up substrate particles and a high organic loading.

Tank mates can be included with certain species of mantis shrimp if sufficiently robust, but generally mantids are better housed alone.

It goes without saying that you should be extremely careful when performing tank maintenance and ensure the tank is securely covered to prevent escape. You wouldn’t want to find one of these in your slippers! 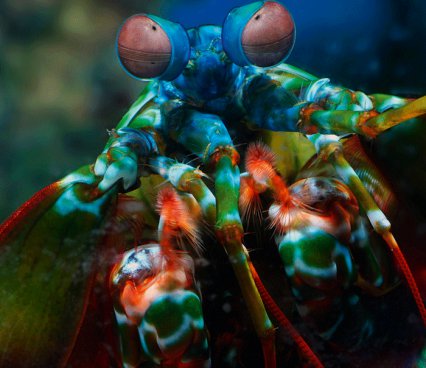 Perhaps the most well known stomatopod, the Peacock or Harlequin mantis is the largest ‘smasher’ reaching around 20cm/8”.

From sandy, gravel bottoms often near reefs and in depths of up to 40m/131’, this species constructs a robust U-shaped burrow and preys on snails, crustaceans and bivalves.

Its common name arises from the flamboyant colour of the tail (telson).

Provide a minimum 100 l/22 gal tank capable of withstanding heavy impacts and furnish with a deep mixed substrate and rockwork — which will be extensively rearranged! 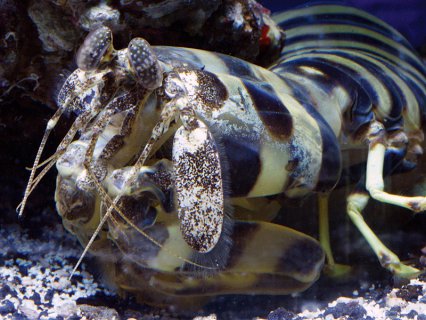 They inhabit burrows made in muddy or sandy reef flats in waters up to 10m/33’ deep. Provide a tank of at least 120 l/26 gal volume with a deep fine/mixed grade substrate. 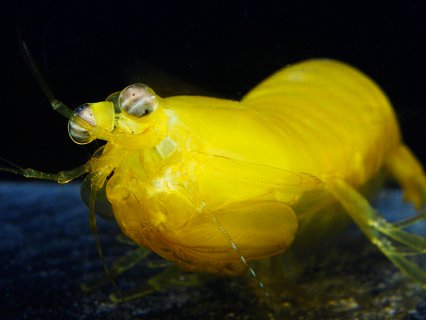 Reaching a modest 10cm/4” the Rainbow mantis makes an interesting addition for a small tank and, being a ‘spearer’, presents little risk of structurally damaging a tank.

Various colour forms have been noted, ranging from black with white markings to solid orange, and they can even change colour on moulting based on their surroundings. Furnish the tank with a few inches of sand, rubble and live rock and feed with fish and crustacean flesh every few days.

Another ‘smasher’, the Purple-spotted mantis gets its name from markings on each merus (upper part of secondary maxilliped). A typical pose is known as the ‘meral spread’ which is commonly used in this species to avoid any direct conflict.

Attaining a maximum size of around 10cm/4” this species doesn’t require a large tank, but still needs a suitably deep substrate and rockwork.

In the wild they will often forage for crustaceans and snails in shallow water and this makes for an interesting and active species in captivity.

This article was first published in the August 2009 issue of Paractical Fishkeeping magazine. It may not be reproduced without written permission.