Nothing seems to compare to the fearless Mantis shrimp. It has the brains and weaponry to make it the most special of agents, as Nathan Hill explains...

If humanity destroys itself tomorrow who takes over the world? Rats? Cockroaches? I’d hazard that the seas would become the domain of the Mantis shrimps.

Mantids are natural-born record breakers and perfect examples of niche adaptations thrown up through evolution. They have probably the best eyes in the world and an explosive, superhuman punch.

Despite the name, Mantis shrimps are not shrimps at all; there’s little 'prawny' about them, despite their shared crustacean origins. They look like a cross between the secret lovechild of a praying mantis — from where they derive the mantid part of their name — and a lobster, and the front of the former seems to have been grafted to the rear of the latter.

There are some 400 species of Mantis shrimp too, ranging from midgets of just a few centimetres to beasts longer than a man’s forearm,

There are two ways by which you’re likely to meet one in an aquarium; deliberate purchase, or accidental addition via live rock. Their survival skills are up there with Bear Grylls.

Unceremoniously uprooted with a piece of rock, packaged in a dry box, subject to changes of temperature, and exposed to horrendous water in a curing tank — mantids have frequently endured all of that without so much as a shrug. 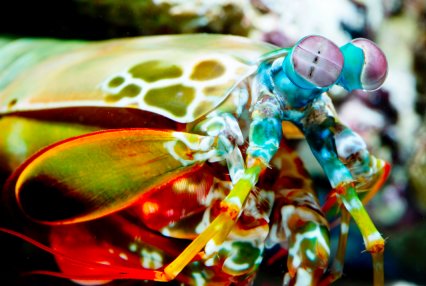 Get one in your tank and it will start to make a dinner platter of the other inhabitants — but removing such a stowaway Mantis can be a challenge as they move fast to secrete themselves away in a cave at the first hint of danger.

The first sign of their presence may be some mutilated fish and inverts, so get searching for their rock of residence.

Given how many aquarists are mantid fans as projects in their own right, that might be all you need to do. Simply stick them and their rock in another tank and you’ll have a free, fascinating pet — plus it’s a perfect excuse to get another aquarium in the house! 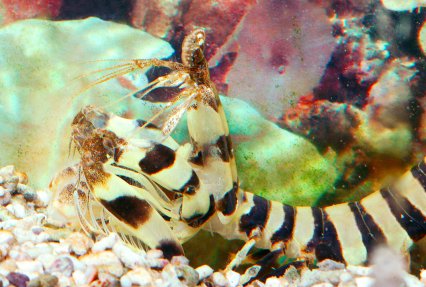 It’s impossible to talk of a Mantis shrimp without referring to its weapons of mass destruction, in the form of raptorial appendages — either being a spearer/grabber (pictured above with its long, hinged arms) or a smasher (pictured below, showing off one of his toughened, high speed hammers). These either lunge and spear prey or deliver a devastating hammer blow that stuns and physically shatters their opponents. 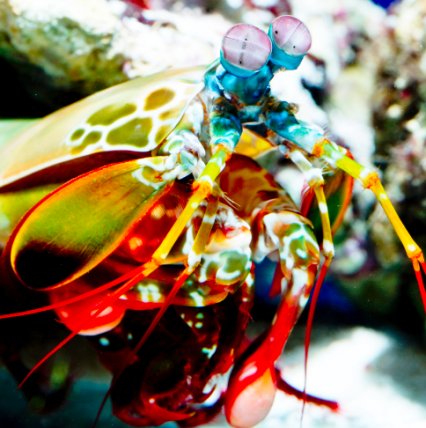 Size for size, smashers have the most powerful 'punch' of any creature. Although their clubs have the acceleration of a .22 rifle bullet, they don’t have the velocity, but this isn’t to undermine their power. The speed of a smasher’s club is around 20m/66’ a second, or 45mph, and this can result in prey receiving a right old belt of up to 1,500 Newtons.

These clubs even lower the pressure of the water ahead of them, causing it to vaporise and cavitate. In a moment this cavitation collapses, releasing a second burst of energy of up to another 590 Newtons against the prey. This creates not only heat and an audible sound but also a momentary explosion of light. When a Mantis strikes, its hapless victim literally sees stars!

The punch is driven by a muscle and lock mechanism inside the arm that causes huge amounts of energy to be retained. Once withdrawn, the whole arm is tensed and ready to shoot forward, much like a crossbow. All the Mantis need do is release the lock!

Just prior to moulting, a Mantis gets volatile, smashing everything in range. Yet for a short period over the moulting cycle it is helpless, and instead resorts to bluffing,  waving its arms and showing two colourful patches directly connected to its strike power. 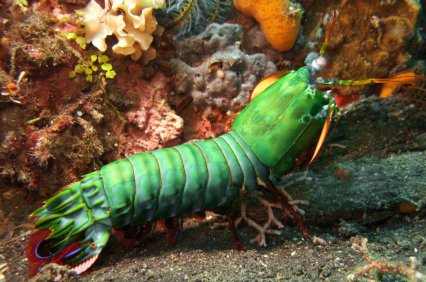 The tail of a Mantis is surely an armoured work of art.

Impact resistant, the chemical structure of their telsons has long been analysed and military intelligence sources in particular want to know more about what makes them so tough.

When two smashers meet they may go tail on, exposing only this hardy part to their foe which will smash against it. In return the other smashes back. Such fights are often just ritualistic and may result in both shrimps retreating.

However, in the event of one clubber invading another’s cave or burrow, this tail is the first line of defence to block attempts at entry.

During their reproductive phases, mantids fluoresce to show their receptiveness. It’s easy to seek suitable partners when their bright patches are shining. 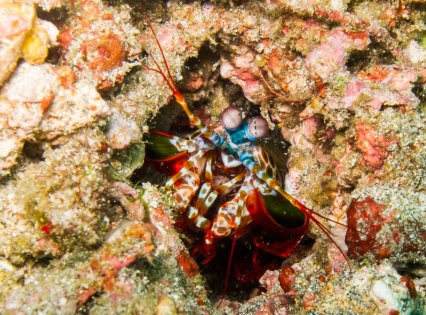 Eyes that see so much more

Mantis eyes are extraordinary. While humans have three colour receptors a Mantis shrimp can have up to 16 of them.

Having 11 or 12 of those receptors devoted to colours, they see the world in a far wider spectrum than we could ever hope to imagine, including way up into the infrared and down into the ultraviolet wavelengths.

There are also colour filters and even polarization receptors so, unlike any other animal, Mantis shrimp can see polarised light and the reasoning behind this may well be down to breeding or other means of communication.

The ability to display in polarising light means that mantids can potentially make contact with each other without the risk of revealing themselves to other predators.

This ability to communicate in colour could also be pretty essential for these shrimps when they begin to seek out a mate.

Though the two eyes appear on stalks, they are comprised of 10,000 individually processed ommatidia, so not only do they have independent vision at the top of each stalk but the very shape and curvature of each eye enables depth perception. They can therefore focus on several objects at once.

Mantids also have an acute sense of smell, combined with an ability to learn fast.

When a Mantis first meets an octopus, for example, a fight will ensue. After that it remembers what an octopus smells like and when it comes across a burrow with octopus aroma, it will instantly tense up, assume a battle stance and enter cautiously.

These creatures have no fear of the high toxic Blue Ring octopus, clubbing it until the venom sac ruptures and the danger of being poisoned passes as it dissipates into the water.

Whether they map their neighbourhoods visually or through smell isn’t fully understood, but we do know that when a Mantis sets up a home it learns its surroundings intimately and can find its way about with ease. 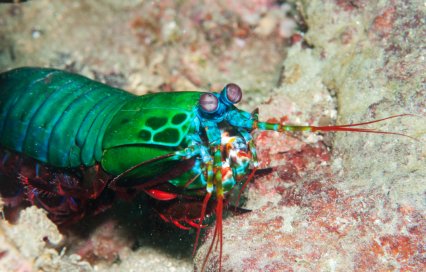 Can I keep them?

You’ll need to keep this shrimp solo and set up a tank specifically for it. Other moving inverts will be bludgeoned, fish minced and sessile inverts and corals knocked over.

This is a creature destined for a sandy, rocky tank, imitating its natural range.

The likeliest offering you’ll come across is the Peacock mantis (Odontodactylus scyllarus). These brightly coloured, highly intelligent pets are both long lived and reach a reasonable 18cm/7”, so although a huge tank is not essential it’s better to provide one if keeping a Mantis long term.

Given that some species live longer than 20 years, and typically Peacock keepers report seven to ten years, it’s an inhabitant you’ll be looking after for quite a while.

Provide a tank of around 120cm/4’ long, and offer a thick, sandy substrate as mantids are burrowers and will freak out in a bare tank. Add a few pieces of live rock and it will excavate a cave for itself in next to no time.

Keep lighting low and high-intensity LEDs or metal halides are not needed. Even a single T8 tube will provide all that’s necessary.

Feeding is a doddle but if done badly is dangerous, as can be the case with maintenance. It’s not for nothing that these creatures are nicknamed 'the thumb splitters'.

Never try to hand feed. Even tongs and tweezers can be knocked clean from your fingers, broken, or snatched and carried back to their lair. Mantis are fast and indiscriminate and can easily tear flesh and crack fingernails in two.

Aside that, their requirements are minimal. Feeding can involve any snails, shrimp, squid and pieces of fish, which they will take greedily. Don’t overfeed them and once every few days is adequate.

Run the Mantis tank as you would a FOWLR system, using a good skimmer — given their rich, meaty diet — and external or sump filtration.

Although they have no particular water needs, mantids won’t do well in poor water quality and can succumb in polluted conditions.

Tease them at your peril!

There are a few reports of large smashers breaking aquarium glass and it is a real, if low likelihood hazard.

They like to strike at anything, so if you happen to be on the other side of the glass, teasing them with a shiny key or food, don’t be too surprised if they dispose of the pane to get to it.