No self-respecting Malawi cichlid keeper should ignore Pseudotropheus demasoni. As Malawis go these little gems should belong in every collection, says Jeremy Gay.

Why go for Pseudotropheus demasoni? Males and females are colourful, it’s one of the smallest mbuna and can be mixed with other mbuna for a riot of colour.

First let’s pronounce it correctly. Most fish species names are related to a physical characteristic, like colour, shape or pattern, or named after the person instrumental in collecting, discovering or making them available to the hobby.

P. demasoni is named in honour of Laif Demason, of Old World Exotic Fish in Florida, who has visited 12 East African countries, farm raises African cichlids and receives imports from more than 15 countries.

He has helped open up new territories for cichlid export from East Africa, mainly the Victorian basin in Uganda, Tanzanian coast of Lake Malawi and from Madagascar.

From an area called Pombo Rocks in Lake Malawi, it hasn’t been in the hobby long, being identified and described by Dr Ad Konings only in 1994.

Since then it has become available tank bred, especially to Europe, via breeders in the Czech Republic. It’s still fairly expensive, costing typically between £10 and £15 each, though if you have a mbuna tank this fish is definitely worth the outlay.

Endemic to rocky areas of Lake Malawi it needs hard alkaline water with lots of dissolved oxygen and low levels of nitrates. In the wild it feeds on aufwuchs and tiny invertebrates that live within it.

Like other Malawi mbuna it must therefore be fed a mainly vegetarian diet with occasional frozen foods. Diets high in Spirulina algae are good for digestion and will also improve coloration.

This fish only grows to some 7.5cm/3” in the wild and, although it may get a little larger in captivity due to better diet, some classify it as a dwarf cichlid. They can and do breed at under 5cm/2” in length.

Your aquarium set-up therefore should be a minimum 90cm/36” in length, tall and wide to increase volume and full of large rocks stacked to create caves, feeding and breeding sites.

Filtration should be powerful, ideally from one or two large external filters. An air pump and air stone will help too, as Malawi mbuna need to be crowded to avoid hyper-aggression from territorial males.

Regular maintenance should keep nitrates as low as possible and if you don’t have hard alkaline water on tap you’ll need some buffer like a powder or use calcareous rocks and substrates.

As mbuna need to be crowded we recommend 20 similarly sized fish be maintained in that 90cm/36” tank.

Keep mbuna only with mbuna, but if you really want to include catfish there are suitable species from Lake Tanganyika, including Synodontis petricola — another pretty dwarf – although you don’t need to add any non-cichlids.

Mbuna tank mates should be fairly mild mannered, of some of the smaller species and different in pattern to the dark blue vertical stripes of demasoni. Avoid large aggressive species, including most Melanochromis, Labeotropheus and a few Metriaclima like crabro and lombardoi. Choose instead Labidochromis, Iodotropheus and smaller Pseudotropheus.

This is no bad thing mix as half a dozen demasoni mixed with half a dozen bright Yellow Labidochromis look stunning.

Avoid similar looking fishes, including Pseudotropheus saulosi which has a yellow female but similar-looking blue vertically-barred male, most Cynotilapia and some ‘elongatus’ including mphanga which has a similar pattern but with a yellow tail. 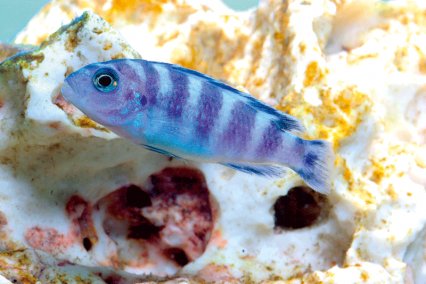 With such impressive markings demasoni can be hard on each other too, so add half a dozen or so and make sure females (pictured above) outnumber males by at least two to one.