Keeping jellyfish in the aquarium Every now and then, a fair number of hobbyists become interested in keeping jellyfish at home. However, this idea is never sustained and jellies have failed to become as popular as predicted.

They remain, however, a relatively common sight in public aquaria and, with some commercially available systems now appearing, how viable do they now seem for domestic tanks?

Keeping jellyfish is a relatively new branch of aquarium science. Until recently it was thought impossible to keep pelagic (open ocean) jellyfish for any length of time in captivity — standard aquarium conditions proving totally unsuitable.

However, pioneering work in the early 1990s at California’s Monterey Bay Aquarium, along with data gathered in Japanese aquariums, succeeded in maintaining a variety of species, starting with the Moon jelly (Aurelia aurita) which is still the most common jellyfish in captivity.

Success with keeping jellies was due to the development of the kreisel tank (from the German for ‘merry-go-round’), which was originally designed to keep gelatinous planktonic animals alive on research ships and in laboratories. The aim is to produce a gentle, flowing water motion in which the delicate jellies and their food can be suspended.

Many aquarium jelly tanks are more correctly referred to as pseudokreisels as they 'borrow' elements from the 'true' kreisel design but modified for better viewing.

Simple, but complicated
Aurelia aurita is a species of scyphozoan ('true') jellyfish with a more or less worldwide distribution. There is debate about the taxonomy of the genus Aurelia, but we consider it a pretty cosmopolitan group of closely-related populations. 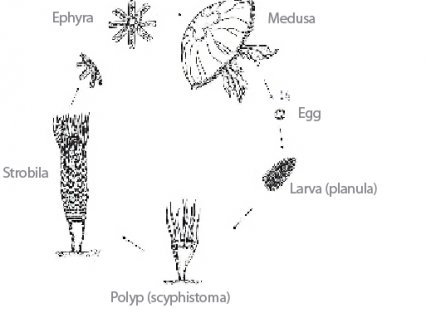 The familiar 'jellyfish' (the 'medusa' stage) is only a part of the life cycle of Aurelia, which is seemingly rather complex for such primitive, simple creatures. Adult medusae reproduce sexually to produce a planula larva which anchors itself to a substrate before becoming an anemone-like scyphistoma —the polyp stage – similar to those of corals, to which jellyfish are related.

This eventually becomes a strobila — each one producing around 15  flattened discs and each of these being an ephyra, a juvenile jellyfish with a star-like appearance and eight bifid ('split') arms released in a process called strobilation. The ephyrae become part of the plankton where they grow into medusae — the reproductive and dispersal stage — and the life cycle turns full circle. Life spans of over four years for individual Aurelia medusae have been reported, although two is a more usual.

Polyps can be maintained simply in a small, bare aquarium with open-ended air line fixed to the base to circulate food — Artemia nauplii, preferably decapsulated to prevent ingestion of the indigestible cysts — and provide gas exchange. Filtration is unnecessary, with water quality maintained through regular syphoning of detritus and subsequent water changes.

'Budding'
Ensure that excessive feeding doesn’t allow hydroids to take over the tank. If maintained at a constant temperature and fed sufficiently, the polyps will reproduce asexually by 'budding' so a small number can give rise to a carpet. Add shells and other objects to which they can attach.

Strobilation in Aurelia occurs after prolonged changes in temperature and some success has been achieved by adding iodine to the culture water, although different ‘strains’ of Aurelia may have different triggers for strobilation.

The resulting ephyrae should be removed from the polyp tank to prevent them being eaten by the polyps and transferred to a similar set-up, the open-ended air line helping to move the juveniles and keep the Artemia in suspension.

This can work well as a 'grow out tank' until the ephyrae have become recognisable as small medusae up to about 2cm/0.8” across — by which time they will need to be transferred to a kreisel tank as air bubbles can start to damage them. 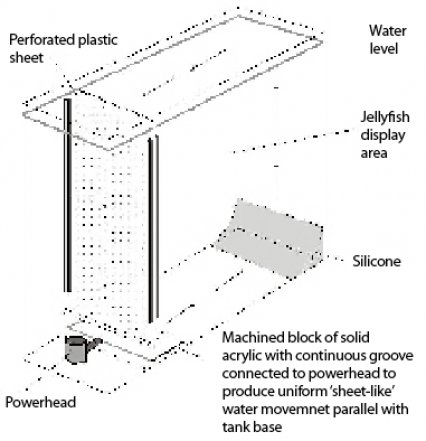 Home comforts
The basic design for a jellyfish tank can be quite simple — although commercially-available systems are available, DIY kreisels can be made with a little ingenuity.

The illustration above shows a simple design for a basic pseudokreisel tank. This successfully housed Aurelia medusae. Filtration was not utilised, water quality being maintained with regular syphoning and water changes, although external biological filtration could be utilised via the rear ('non display') portion of the tank.

A jelly tank must be radically differently from a normal aquarium. A well-designed kreisel (or pseudokreisel) will create laminar, sheet-like water circulation patterns to keep the jellies in suspension. Flow rates must be gentle to prevent damaging them, but strong enough to keep the animals moving and prevent dead spots where they might collect.

Aeration is not a feature of such tanks, as any air bubbles will become stuck under the medusa’s umbrella, leading to holes in the body. If these aren’t removed rapidly the jellies will die and many a tank has suffered a wipe-out from accidental introduction of air bubbles.

Gas exchange will take place at the water’s surface, even in gentle flow, but ensure that a 'skin' of oil isn’t allowed to accumulate there.

Biological filtration is beneficial provided it can’t introduce air bubbles into the tank and a coarse medium, such as bio-balls, prevents the jellies’ food becoming rapidly depleted — media-like foam tending to filter the feed out too efficiently.

Some basic tank designs don’t employ filtration at all and these can be reasonably successful, although very frequent water changes are obviously necessary — which aren’t a problem for most public aquariums but less practical at home. Protein skimmers are usually considered unnecessary for jellyfish kreisels, as they may clean the water a little too aggressively, not to mention increasing the risk of potentially lethal microbubbles being added to the tank water.

Aurelia are temperate and chilling the water may be another requirement: the optimum range for most strains being 10-15°C/50-59°F, although slightly higher temperatures are often tolerated.

Large medusae will benefit from varied feeding — in addition to decapsulated, preferably enriched Artemia, there’s room for a certain amount of experimentation. The Monterey Bay Aquarium include Pacific krill in the diet of their Aurelia, and Japan’s Osaka Ring of Fire Aquarium report that minced clam as a supplementary feed prevents deformation and promotes healthy growth. Aim for variety in the medusa diet.

If adult Aurelia can be kept for long enough in a kreisel, sexual reproduction may well happen, with polyps appearing in the tank as a result. These can be scraped off the glass with a razor blade and transferred to a culture vessel, although another way is to place half scallop shells on the kreisel’s base. They are flat and smooth enough for the medusae to glide over them, but are an ideal substrate for settlement by the planula larvae. Once a few polyps are on the shell, they can be easily removed and cultured separately.

Catch your own!
Where can you get jellies? You can’t pop down to your local shop to buy Aurelia, which leaves one option – catch your own!

A little bit of 'pioneer mentality' is required if you’re serious about jellies! If able to obtain wild Moon jellies, they are best transported in large, thick plastic bags with all the air squeezed out — and never take a jelly out of the water!

A few polyps are all that’s needed for a starter culture. Using wild-caught animals may not initially be ideal, but our knowledge of their reproductive habits and culture requirements is now sufficient to allow a genuinely sustainable captive population of jellies to quickly become established from a few wild-caught individuals. After all, this is what public aquariums  have been doing for years, with by far the vast majority of specimens on display being captive-raised. 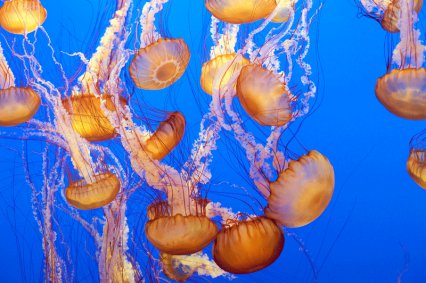 Other species
Other, more ‘exotic’ species of pelagic jelly are successfully maintained in public aquaria and all present unique challenges. One such beautiful species is the Pacific Mastigias papua, which houses symbiotic zooxanthellae, as does Phyllorhiza punctata, so these have additional lighting requirements.

Chrysaora fuscescens, the sea nettle, is also kept by some establishments, but these are large and generally require supplementary feeding on other jellyfish! Whether any of these could be viable for home culture is debatable… 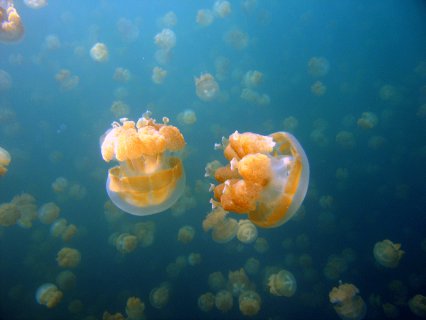 Easier alternative
Easier to maintain in captivity are the 'upside-down' jellies of the genus Cassiopeia, which are  occasionally seen in the trade. Unlike Aurelia or other pelagic jellyfish, this species spend most  time on the shallow sea floor, upside down to expose their symbiotic zooxanthellae to the sunlight.

Adults of C. xamachana can grow to a diameter of 30cm/12”, with a lifespan of around one year, with the more commonly-available C. andromeda reaching 20cm/8”.

Ethusa spp., a group of crabs, are regularly seen on Indo-pacific reefs carrying Cassiopeia jellies on their backs for camouflage and protection. While not as mesmerising as their pelagic counterparts, these can look stunning, often exhibiting delicate blue and purple coloration.

Care for Cassiopeia is more straightforward than for say Aurelia, or any other truly pelagic jelly, although specific requirements still need to be catered for. They can be kept in shallow aquaria —depth being less important than area — with a sandy to coarse substrate, and they do best in a species tank. Many specimens are doomed to die quickly as ‘novelty’ additions to a standard reef aquarium.

Filtration can be achieved via the reverse-flow method, although many public aquaria do not utilise biological filtration to achieve rapid growth rates. Cassiopeia are hardy and tolerant of a range of water quality parameters and detectable levels of ammonia don’t seem an issue. In fact, ammonia supplies the jellies’ algal symbionts with nutrients, resulting in greater growth rates than when biological filtration is employed!

Some aquarists also report that reproduction is triggered by increases in ammonia. It’s vital that Cassiopeia receive intense lighting of suitable ‘reef’ quality, but won’t tolerate currents normally associated with reef aquaria — so strong or even moderate water movement is a no-no!

Feeding on Artemia nauplii —again, preferably decapsulated — and other foods is necessary.

Breeding Cassiopeia in captivity is possible and many public aquariums culture upside-down jellies as a food source for other species. Cassiopeia polyps continuously strobilate at temperatures above 25°C/77°F and polyps kept in a culture tank at a lower temperature will asexually bud off tiny replicates of themselves, so it’s possible to keep a healthy supply of polyps.

Ephyrae and small medusae can be maintained in simple 'grow-out' tanks.

This item first appeared in the November 2008 issue of Practical Fishkeeping magazine. It may not be reproduced without written permission.