Jeremy Gay profiles one of his favourite cichlids that's named after a boxing legend, but insists it's now more of a pacifist than pugilist when compared to more modern bruisers.

Get someone to draw a cichlid, or simply describe one, and he or she will probably get close to a Jack Dempsey: large, thick-set, big eater and too boisterous and predatory for the average community tank.

Jack Dempseys are archetypal cichlids popular for so long that their namesake, the famed American heavyweight boxing champion of the world,  William "Jack Dempsey" Harrison, had his heyday in the 1920s!

Dempsey remains ranked number seven in the Top 100 greatest punchers of all time and for fishkeeping pioneers this Central American cichlid must have had many similarities. However, compared to some cichlids now commonly available, the Jack Dempsey has dropped down the rankings and is kept now more for its colour than ferocious behaviour. 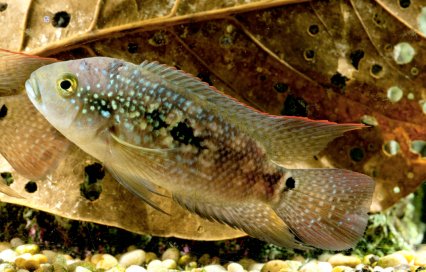 The Jack Dempsey naturally occurs in Mexico, Honduras, Guatemala and Belize, although it has been introduced — or escaped — to other areas with year-round warm climates. It naturally inhabits warm, sluggish waters, feeding on worms, crustaceans, insects and fish.

Like many cichlids the Jack Dempsey has an interesting past; starting off as Cichlasoma biocellatum more than 100 years ago, then changing to Cichlasoma octofasciatum, Heros octofaciatus, Parapetenia octofasciata, Nandopsis octofasciata, Archocentrus octofasciatus and most recently Rocio octofasciata. However, despite these many changes, the species will rarely be mistaken for anything else. I’ve kept them many times because ‘JDs’ are hardy, easy to keep, easy to breed, colourful, cheap to buy and improve with age.

They are also a tough, quite boisterous fish, yet not massive in size — meaning that for most, if not all, of their lives they could be housed in a 120cm/4’, or ideally 150cm/5’ tank.

I’m not recommending a 180 x 60 x 60cm/6 x 2 x 2’ tank as a minimum, as I would for other Centrals like a Midas cichlid. Although more boisterous than your average fish, they are certainly not one-fish-one-tank creatures, so can be housed with other large, hardy species. 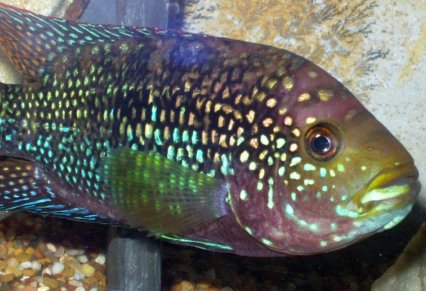 Part of what has made JDs so popular is their ease of keeping. In nature their waters are generally hard and alkaline, pH 7-8, with a temperature range from 22-30°C/72-86°C, depending on time of year. That encompasses a large bracket of tolerable water conditions, matching how most of us keep our tropical tanks — and if your pH were to go higher or lower, that’s fine too.

A 240 l/ 53 gal tank with external filter would be a good start for some juveniles. Jack Dempseys like to mouth the substrate looking for food and will dig when breeding, so provide a substrate some 5cm/2” deep of sand, grit or gravel, or a mix of types and grain sizes.

I prefer the natural look, so decorate with large pieces of bogwood and large rocks, placing the rocks first so if the fish do dig, you won’t get rockfalls.

Jack Dempseys are middle to bottom dwellers and territorial, so place décor to carve up the tank bottom into clear territories, but also provide vertical structures or plastic plants to break lines of sight.

You could use tough live plants like Java fern or Anubias on wood or rocks, although when I keep JDs the fish do their own aquascaping when growing. 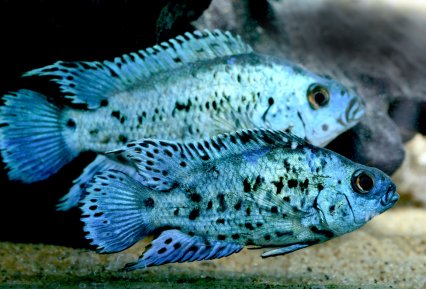 This depends on whether you intend to breed them. To get the best value, buy juveniles around 5-7.5cm/2-3” in length. If you want them just for behaviour, character and colour in a mixed community of cichlids and catfish, just buy one and it’ll be fine.

As with all cichlid "community" set-ups try to keep shapes and colours different, so that the fish aren’t competing like for like.

Severums make good tank mates as they are large, deep-bodied, differently coloured and patterned, yet quite placid.

If you want to breed get four or five — picking those with the most contrasting size, shape and behaviour from your dealer’s tank. To sex them, males are larger with bigger heads and will dominate dealer tanks, even when small.

They become longer too, can turn a pinkish base colour, especially on the gill covers, and tend to have little or no blue speckling on the lower jaw. 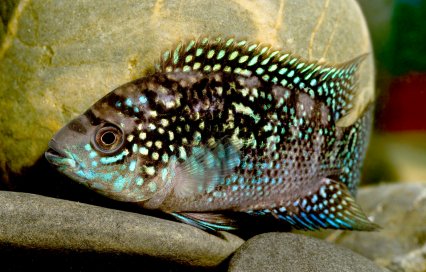 If you want more definite sexing, pick from fish 10cm/4” and larger. Here males have a longer head, with a more masculine jaw line and, depending on mood, may be quite pale. If lucky, a frisky female will show herself by turning very black and highlighting the blue speckles on her gill and jaw.

You could see some black vertical barring on her too and, when they pair, both will turn more intensely black and look even more scary and imposing — if that’s possible!

Juveniles can double in size within a year and sex out, but if you don’t want to wait adults are widely available, usually returned to shops by previous owners.

Beware of similarly looking "pairs", as an adult pair should clearly look different, with a much smaller female and longer, larger male with a bigger head. I’ve seen “pairs” on sale which are two males just tolerating each other and probably siblings.

To avoid inbreeding, source your male and female from different shops, from different batches and at different times. Having said that, not buying them as a mated pair will necessitate work pairing them.

With nearly all artificially-paired, egg-depositing cichlids you add female to existing male. He sees her as a ripe female entering his territory, wants to spawn within seconds of her arrival, but she is not ripe with eggs or receptive.

The male thinks "stuff you then", and beats her up for not clearing off —  which, of course, she can’t.

You’ll observe the new pair the next day, finding the female in the top corner looking like she’s been up and down a cheese grater and close to death.

To prevent this scenario you really need a divider, to ripen the female first then introduce the male to her, and then be ready to intervene if it goes wrong. The good news is that, once paired, they should be good for cohabitation forever. 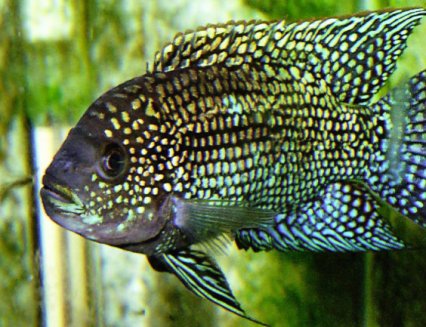 Jack Dempseys choose caves, pipes or overhangs to spawn under, usually on the base, and they usually dig a pit around it in which to herd the fry and prevent you viewing them. JDs spawn readily both in your main tank and in breeding tanks, and although it is a wonderful sight I advise caution as a mated pair will spawn and spawn, and you will have real problems rehoming the fry.

As an example, when I was a livestock manager being offered fish I would want no more than 15-20 2-3” fish, or maybe three or four mated pairs — and be reluctant to offer much for them as I could buy them very cheaply from suppliers abroad.

If you don’t cull your numbers you will have several hundred every few months and a totally saturated local market.

Despite their name and reputation, Jack Dempseys can often be shy and retiring — even skittish when first introduced. To overcome their apprehension, place them in tanks with dither fish already there. Just make sure there’s plenty of hiding places and keep lighting subdued. 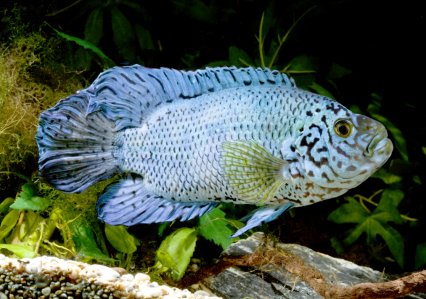 The Internet is great for acronyms and this variety is often referred to online as the EBJD — Electric Blue Jack Dempsey.

I should love these stunning fish but, I’m quite turned off.

Part of the original species’ charm is in its subtle coloration and the challenge of conditioning it over years to create a stunning adult. Buy a small EBJD and its already bright blue,

Next is origin. It’s the source of debate, but I feel the EBJD was created by crossing a JD parent with another, probably Central American cichlid species. Some will argue that they occurred naturally in a freak spawning and have been line-bred from that.

However, these have longer fins (a typical hybrid trait), different skull shape within batches of juveniles — and not just the usual male and female either — and some have irregular scales.

In addition, despite seeing pairs of EBJDs, I haven’t yet seen them produce viable EBJD fry. Instead some people pair them with ordinary JDs and sell some as "blue gene jack dempseys" which just look ordinary.

They are stunning fish, not deformed like Parrot cichlid hybrids but nevertheless of questionable parentage.

Price puts me off too. I first saw some on sale during a PFK shoptour at £7.50 some five-plus years ago. The most recent juveniles I noted were £42.50!