In search of a rare Corydoras... Ingo Seidel goes in search of Corydoras boesemani in Suriname to hopefully catch enough of these lovely catfish to breed them in the aquarium. Translation by Kate McKay.

I had always wanted to catch and breed a particularly rare catfish and an expedition to Suriname seemed to offer great promise. So, with colleague Peter Debold, I headed out to the waters of the smallest and least populated country in South America.

Almost all of Suriname’s population lives on the coast and there are next to no roads into the interior, so we flew to the upper reaches of the Suriname river — home of Corydoras boesemani.

Typical habitat for this fish is near Awarradam on the Gran Rio river tributary of the Suriname where dense rainforest still covers 80% of the land. 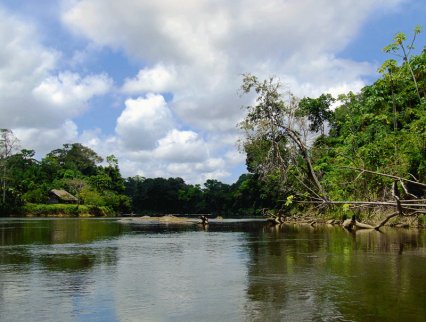 Discovery!
For two days we travelled the Gran Rio and regularly came across Corydoras boesemani in small groups and catching them was very laborious. In tributaries they disappeared like lightning among the leaves which, in most places, completely covered the ground.

It’s no fun fishing here either. Since rivers are mostly slow flowing the beds were very muddy, so we sunk deep when in the water. By the banks, the shoals preferred places where branches reached into the water and it was very difficult to try and catch even a single specimen. 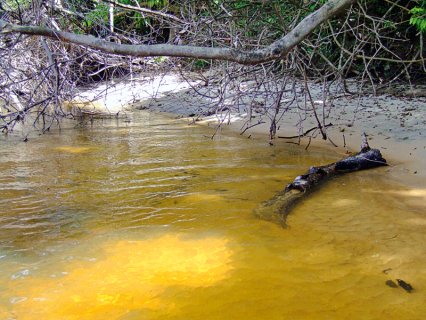 We went from sand bank to sand bank, getting out of the boat to look for bigger swarms and finally struck lucky. At two banks about half an hour apart we came across groups of hundreds of juveniles, all generally 12-15mm/0.5-0.6” long, and netted a good number with a seine net.

We distributed them into several boxes at camp and fetched fresh river water every morning and evening for almost complete water changes, finally taking 50 back to Germany with us.

Capturing Corydoras punctatus was more difficult. Although this species had been collected and distributed in the hobby by Werner Seuss some years ago, I was keen to bring back quite a few to breed as they seem to have completely disappeared from German aquariums.

This species is found in great numbers in the lower reaches of the Suriname river. Near Awarradam however, we only found small groups in a few places and these were mostly in fast flowing sections where catching is impossible. We didn’t take anything with the trawl net so were forced to catch the fish individually with two large landing nets. In two days we took ten medium-sized specimens.

We could not find any other species in Awarradam. The catfish in the Gran Rio were almost exclusively taken during daytime. Our night trips to the sandbanks brought no success, although these were not as meticulous as our daytime forays.

The Gran Rio has clear waters with soft, slightly acidic water and during catches we took afternoon readings of 28.4°C/83/1°F, pH 6.65, conductivity 11 µS/cm. 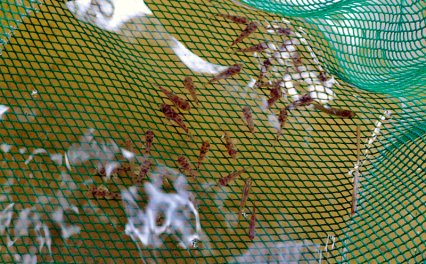 In the aquarium
Back home the arrivals settled in with no real problem. In a mix of mains and reverse osmosis water, with conductivity at roughly 400, they thrived in temperatures between 24-27°C/75-81°F.

Since they were predominantly still juveniles and had to go though a period of starvation while in transit I knew that optimum care in the early days was crucial. For this reason I fed them several times a day on brineshrimp nauplii, Tubifex and tablet food, and did partial water changes as often as possible.

In the next few days I had two casualties, probably dying of journey stress, starvation phase or the move. The remaining fish all developed bulging girths after a few days. They were also faintly coloured with barely noticeable dark markings. They were soon 2cm/0.8” and had developed colouring similar to adults. 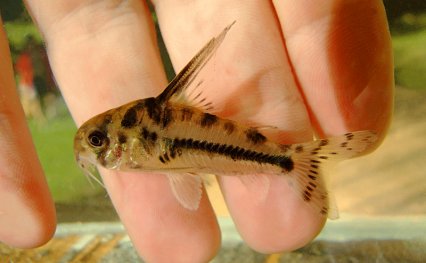 I also brought home three adults, evidently one male (above) and two female.  The largest, a female, was 45mm/1.8”. The males seem to stay a little smaller, slender, have a higher dorsal fin and stronger colour.

The behaviour the fish display in the wild was also evident in the aquarium. While the juveniles swarmed in search of food, the adults did not venture out of their hiding place even once to eat. I had to reach in and cajole them out, even to get a look at them, and I was not familiar with such behaviour in similar species.

From its body shape and markings, this cory obviously has a close relationship to Corydoras bondi with which other species from the north-east of South America could be said to be related — such as C. coppenamensis, which also live in Suriname, C. breei and C. sipaliwini, as well as C. sp ‘Mazaruni’ (C150) from Guyana.

I set up a 50 x 30 x 30cm/20 x 12 x 12” tank with plenty of hiding places and a Hamburg filter with air lift. On the bottom was a thin layer of fine soil, similar to conditions in the wild. I arranged a few cleaned oak and beech leaves on the floor too.

It was some time before I got the fish conditioned to the point where I hoped that breeding was possible and Peter had provided me with a second large male to create two mature pairs.

Meanwhile, with greatly increased feeding with Tubifex, live red and white mosquito larvae as well as microworms the fish were bursting at the seams.

The female was noticeably gravid and I took this as a cue to increase frequency of water changes. I changed some of the tank every two days with fresh water of the same quality, but 2-3°C cooler.

One evening I discovered an egg on the side wall of the breeding chamber. It was a little more than 2mm and comparable to the eggs of C. sterbai and C. aeneus. Then I found a second and third. I collected a total of 32, but only two seemed to be developing; the others already white and dead.

With further intensive water changes the fish spawned about once a week, but I never managed to observe it. The 30 or so eggs so far had been mostly laid hidden under stones and plant roots but their favourite site was on the leaves. This must also be their favoured site in the wild.

The eggs were moved each time into a bowl of clean, fresh water. To reduce bacteria I also added Acriflavin. Once a day the dead eggs were collected, container cleaned and remainder put into fresh water.

At 24-25°C/75-77°F the fish hatched after four to five days. The young had yolk sacs to start with and it was the same length of time again before each was consumed and they began to eat. My first offering was newly hatched brineshrimp nauplii which was taken immediately. Growth was getting noticeably quicker too.

At first the fish had fine markings, similar to many other young catfish. The dark eye stripe, as well as a dark spot at the base of the dorsal fin, was formed. Only after several weeks did the typical markings of Boeseman’s catfish become visible.

While only two fish hatched from the first eggs there were many more from following spawnings — and my dream had certainly come true. Their upbringing was problem-free, juveniles of various ages growing well together without older fish interfering with their development. After a while frozen Cyclops and tablet food were taken as additional food.

Since then I’ve got the first eggs from a second group of fish which have since grown to adulthood, although the clutch was smaller.

So, apparently C. boesemani is not difficult to breed and although it appears to be particularly unproductive it can be maintained as a hobby fish by breeding without problem.