Matt Clarke on Hydrolycus scomberoides, one of the toothiest of all South American fishes.

Common name: Payara
Scientific name: Hydrolycus scomberoides (Cuvier, 1819)
Origin: Fairly widespread in South America. Museum specimens have been recorded from Brazil, Bolivia, Peru and Venezuela.
Size: This species is a fearsome predator that reaches up to 120cm/48" in length in the wild.
Diet: This fish has enormous fang-like teeth, designed for grabbing hold of fish. Small specimens might take shrimps, too, but adults are exclusively piscivorous. As you would expect with a specialised species like this, feeding these fish is challenging and newly imported fish take time to be weaned onto dead fish. Adults have teeth that make the canines of my retreiver look small, and could probably remove a limb.
Water: Found over a wide area, so probably relatively adaptable. Ideally soft, acidic or neutral water would be best, but these were doing well in alkaline water. 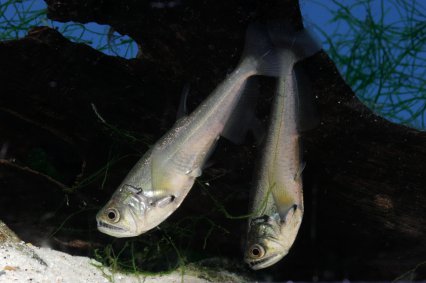 Aquarium: Small specimens appreciate shelter and live in groups and hang head down waiting for prey fish to pass. Presumably there's also a biological reason for this posture, and perhaps they feed on benthic fishes or shrimps while juvenile. Little is known about keeping the adult fish, but it's likely that they will need to be kept singly, as they have the potentially to swallow prey of very large sizes. The mouth opens like that of an arowana. According to www.opefe.com, can reach 40cm/15" in two years but few have been successful in keeping the fish alive past this point. Presumably space and feeding become an issue. As a result, this isn't a species to be recommended unless you're very experienced and can provide a truly vast aquarium. We'd recommend that you avoid this species and other Hydrolycus.
Notes: This toothy fish is a member of the Characiniformes family Cynodontidae. There are three other species in the genus (H. pectoralis is a synonym of H. scomberoides), but these have rarely been mentioned in aquarium literature before. H. armatus (about 60cm/24") is the oldest species, and was described in 1841 by Jardine and Schomburgk. H. wallacei and H. tatauaia were described in 1999 by Toledo-Piza, Menezes and dos Santos.
Identification: H. scomberoides is relatively easy to identify among the four fish in the genus, as it's the only one with a black spot at the base of the pectoral fin, apart from H. tatauaia which has a black spot and a black line running vertically with the operculum. H. wallacei, from the Rio Negro, reaches about 30cm/12" and is blackish in colour.
Availability: This species is rarely seen on sale in the shops. These ones were imported by Tom Halvorsen Ltd and were on sale at Wharf Aquatics in Nottinghamshire.
Price: Expect to pay £20 plus.

This article was first published in the September 2006 issue of Practical Fishkeeping magazine.