Hybrid synos and how to avoid them Hybrid synos and how to avoid them

Hybrid Synodontis have started appearing in the shops in increasing numbers. Dr Heok Hee Ng explains why there are suddenly so many about and offers advice to hobbyists who are buying fish on how to tell a hybrid from the genuine article.

Synodontis are the dominant African catfish in the aquarium trade, because of their attractive colour patterns and generally peaceful nature, making them suitable tank mates for a community tank consisting of medium to large-sized fish.

Because Synodontis are so popular with aquarists, it is not surprising they would be one of the first fish targeted for hybridisation. However, fishkeepers’ reactions to these hybrids differ widely. For some, the availability of hybrid species is greatly welcomed, since this usually means being able to obtain attractively coloured fish relatively cheaply — but the purists view hybrids with distaste.

Why do Synodontis form interspecific hybrids so easily?

One possible reason is that many species of Synodontis are much more alike genetically and consequently more closely related than previously thought. A recent study on the molecular phylogeny of Synodontis found that those in Lake Tanganyika evolved as recently as 5.5 million years ago, and that a group of closely-related southern African species is even younger, evolving within the last 900,000 years or so. It is assumed that there is even ongoing natural hybridisation within such very young species flocks.

Although breeding non-Rift Lake Synodontis in the aquarium is not easy, many of the riverine species are very amenable to induced breeding via hormone injections. Breeding reports of riverine species such as S. schoutedeni using this method can be found in some aquarium literature.

Commercial fish breeders may not even require the fish to breed naturally, since it is much easier to strip the eggs and milt (sperm) from the fish after hormone injection and generate interspecific hybrids simply by fertilising the eggs of one species with the sperm of another. As a result of the quest for “new” and “interesting” species, commercial fish breeders in eastern Europe — most notably in Russia and the Czech Republic — and Asia have begun producing interspecific Synodontis hybrids in recent years.

These hybrids are sometimes sold in the guise of rare Synodontis species, such as S. ornatipinnis and S. velifer, and at other times have been sold under their own made-up names. 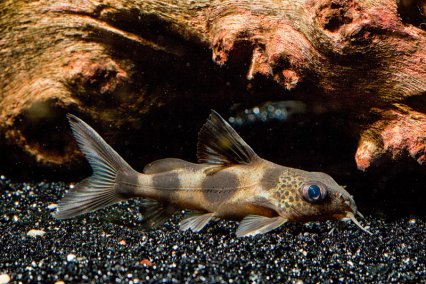 If you have decided to purchase a hybrid Synodontis, or if you were unfortunate enough to have bought one by mistake, how should you take care for it?

Since these hybrids are not found in the wild, there is no benefit of any habitat data that can be used as a guide. However, if it is possible to establish the parentage of the hybrid, it is still possible to use requirements of the parent species as a rough guide.

If you do not know the exact parentage of your hybrid, perhaps a safe bet would be to use values more middle-of-the-road, such as pH to 7.0–7.5 and GH to 10.

Hybrid Synodontis are relatively easy to feed, as with most other true species, and will readily feed on most live, frozen and commercial food.  As with wild Synodontis, make sure to vary the diet and include vegetable matter when feeding them.

You can also use algae wafers as these fish are omnivorous.

As with many catfishes and true Synodontis, hybrids feel most comfortable with adequate hiding spaces, so make sure you provide plenty of rockwork and/or driftwood for this purpose.

How do you tell if the Synodontis catfish you encounter at the store is the real deal or a hybrid?

The most reliable way  to identify a hybrid is to use the following combination and not just rely on any one of these characteristics.

Many hybrids with one or both Rift Lake species as parents frequently possess spots on the body that are not completely round but look like short, wavy lines or assume the shape of an incomplete ring (C-shaped). In such cases, the chances are high that you are looking at a hybrid.

For hybrids with non-Rift Lake species as parents, one common colour pattern seen in many such hybrids is the presence of wavy lines, particularly light wavy lines over a dark body.

Not all species that have light-coloured wavy lines on a dark body are hybrids, as there are some species, for example S. aterrimus and S. brichardi, with such a colour pattern. However, the number of species with such a pattern frequently encountered as aquarium fish is very small, plus they are frequently encountered in small numbers. So if you see a tank of numerous synos with a dark body and light wavy lines, chances are better than even that you are looking at hybrids. 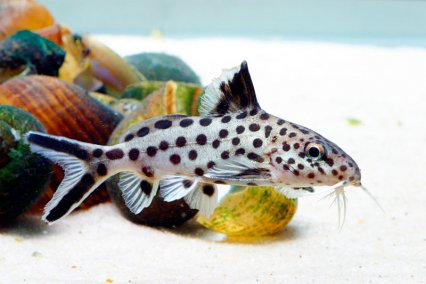 Many hybrids with Rift Lake ancestry have some elements of the fin coloration of the Rift Lake species. In the true species like the one pictured above, this typically consists of a black dorsal fin spine and a black dorsal fin with a white hind edge and a pair of black stripes that run along the outer margins or centres of the caudal fin lobes.

In many of the hybrids, like the one shown above, we see an incomplete manifestation of the parental colour pattern; so many hybrids may have a black dorsal spine, but not a black dorsal fin (and white hind edge), or incomplete/indistinct black stripes that run along the caudal fin lobes.

Some hybrids have distinctly humped backs caused by a very distinct concavity in the nuchal (neck) region.  With very few exceptions,  such as S. pleurops, Synodontis do not have such a prominent nuchal concavity. If present it can be very slight.  A distinct nuchal concavity is a sure sign that you are dealing with a hybrid or deformed fish.

A number of hybrids also appear to have squat bodies, although this may not be so obvious.

Some of the hybrids exhibit a distinctly kinked dorsal spine.  This may be kinked in very large individuals of some species,  like S. clarias, but if you see a kinked dorsal spine in a young fish, chances are more than even that you are dealing with a hybrid.

This is perhaps the easiest but least accurate way to determine if the Synodontis catfish you see in a store is a hybrid, as everyone knows the names given to fishes in the shops are never completely accurate and many of you have come across gross misidentifications there.

Still, there are some species names and words that should be flagged. One such name is S. ornatipinnis.  While the real S. ornatipinnis is very rarely encountered in the aquarium trade — and command high prices when they do — some hybrids are sold under that name.

Another such name is S. velifer, which is another attractive species rarely encountered in the trade. Some breeders/exporters unscrupulously pass off the hybrids as belonging to these rare, attractive species in order to make them more desirable.

Other hybrids have had 'scientific' names created for them. One notable example is Synodontis “zebrinus” which is a hybrid of possibly S. euptera with S. schoutedeni. Still others have had their scientific names legitimised, like Synodontis galinae, a species described in 1998 but this is most likely a hybrid.

Ultimately, being able to tell if you are being sold a hybrid instead of a true species boils down to experience and knowing what the species in question actually looks like. A good guidebook with helpful photographs can be of great assistance, especially if you are an inexperienced fishkeeper.

Because so there are so many Synodontis species that can be hybridised, there is no hard and fast rule to identifying a hybrid. The characteristics discussed above can help in identifying most of the hybrids presently on the market, but ultimately, it boils down to experience with this group of catfish. My advice is that if the syno looks like it may be a hybrid, it is safer to assume it is than purchase a fish you may not want to care for.

Hybrid fish have become a polarising issue within the aquarium hobby, as the very mention of this subject tends to elicit a strong response from either side of the fence. Why is the idea of hybrids so repugnant to some aquarists?

This basically stems from the issue that the creation of hybrids is a manifestation of arrogance in displaying our ability to control evolution and improve nature.

At the same time, there is the worrying possibility of the effect hybrids may have on diluting the gene pool and keeping species separate. This is especially significant in species where wild populations are declining. Captive aquarium breeding may be the only lifeline against the threat of extinction — in which case the reproductive effort to produce hybrids is wasted as far as the survival of the species is concerned.

There is also the related ethical issue of passing off hybrids as a true species. This Is dishonesty that may also stymie conservation efforts for the more rare species.

On the other side of the coin, some argue that keeping hybrids is no different from keeping cultivated varieties, or even wild-caught fish. The argument is that cultivated varieties — as in goldfish and some livebearers — already have had their genetic make-up artificially altered by humans anyway.

This line of reasoning also extends to wild-caught fish, as keeping and breeding them in the tank inevitably leads to a man-made alteration in the genetic composition of the fish.

Everyone has their take on hybrid aquarium fish and the point of this feature was not to argue which view is morally correct, but to present both sides of the argument and lead to informed choice. 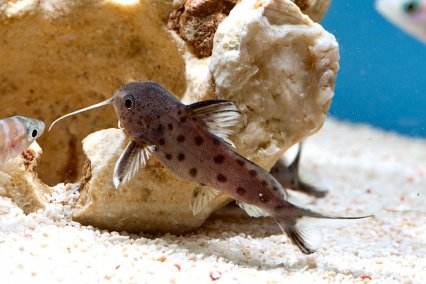 Common hybrids to look out for

This is a list of the more common hybrid Synodontis encountered in the aquarium trade. It is not meant to be exhaustive, as the number of possible hybrids is quite large and it is difficult to predict the types that may be produced in the future.