How to win the algae battle in your aquarium How to win the algae battle in your aquarium

Any tank you ever set up will be subject to an algae outbreak sometime. The trick is to learn to manage, rather than completely eradicate it.

Every newcomer to the hobby will be united in asking, somewhere around three or four weeks into their experience, about how to deal with the algae forming in their tanks.

It’s no coincidence that some tanks are hit harder with the green stuff than others. Algae are numerous in their forms, from microscopic green ‘orbs’ that drift like balloons, to long, pernicious strands of red or black that carry the resilience of a born survivor.

The basic algae problem involves a tank full of water, light (which supports plant life), nutrients (either too much or too little) and carbon dioxide (which may or may not be in your control.) Wherever these ingredients are found, they present an opportunity for algae to grow.

For the everyday aquarist, there are a few strains that might appear, and there are different ways to deal with each one. Algae is not algae, is not algae. There are the green
and red varieties, needing different handling approaches, plus the peril of ‘algae’ that isn’t even true algae.

It’s important to diagnose and understand what type you’re up against before you decide on what action to take against it. 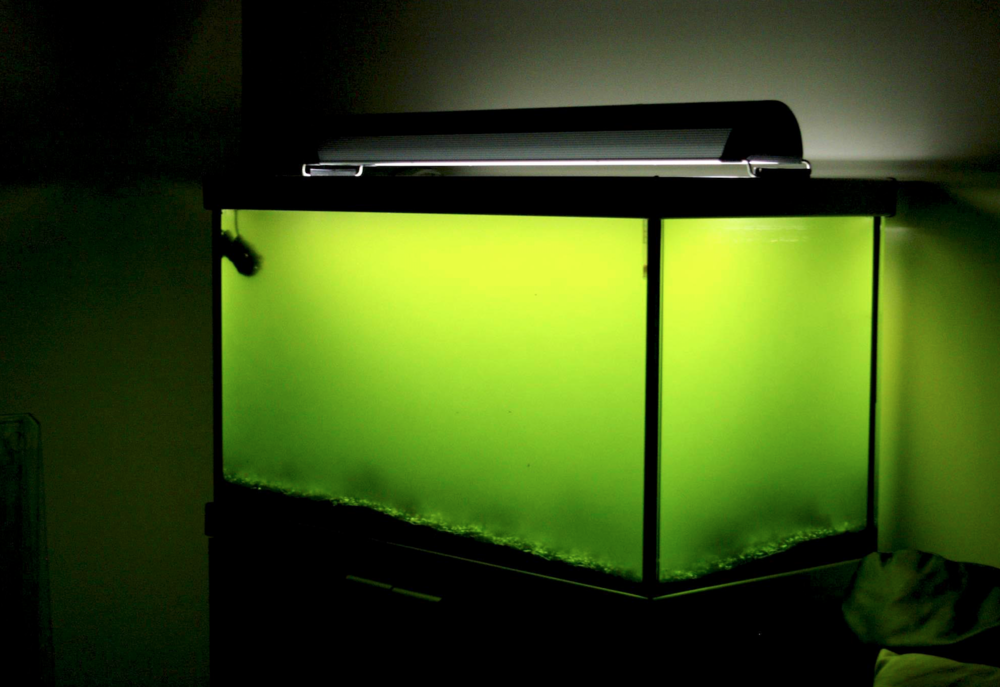 Where are the fish? Green water in an aquarium.

This is quite a rarity in tanks (as opposed to ponds) unless you’re tampering with carbon dioxide and nutrient levels, but it can still strike out of the blue.

The cause is a unicellular alga that lives free in the water, too small to get trapped in filters, and too persistent to be diluted out with a simple water change or two.

Ammonia is implicated in causing and sustaining green water, and stirring up substrates, subsequently releasing ammonia in to the water, can be a trigger. Off the shelf algaecides may help, water changes do very little, and my own experiences have found that a temporary black out where lights are turned off and the tank shrouded to keep out any external light will help reduce it, but not always eradicate it.

To add to the frustration, it will often disappear in a day or two entirely on its own.

An alga type that’s  found mainly in new set-ups, green dust lives up to its name. It mainly forms on the glass and hard, smooth decoration like rounded stones, and
given time to cement itself in place it can be stubborn.

Attacking it frequently seems to make it linger, and aquascapers will sometimes just leave it alone for several weeks (until the glass becomes near impossible to see through) before removing en-masse by scraping it from the glass with a blade or plastic edged cleaner, and then syphoning out the removed algae from the base.

Oddly, in heavily planted tanks, a low level of nutrients can be part of the cause, but unless you’re a dedicated aquascaper you won’t want to add more plant food! 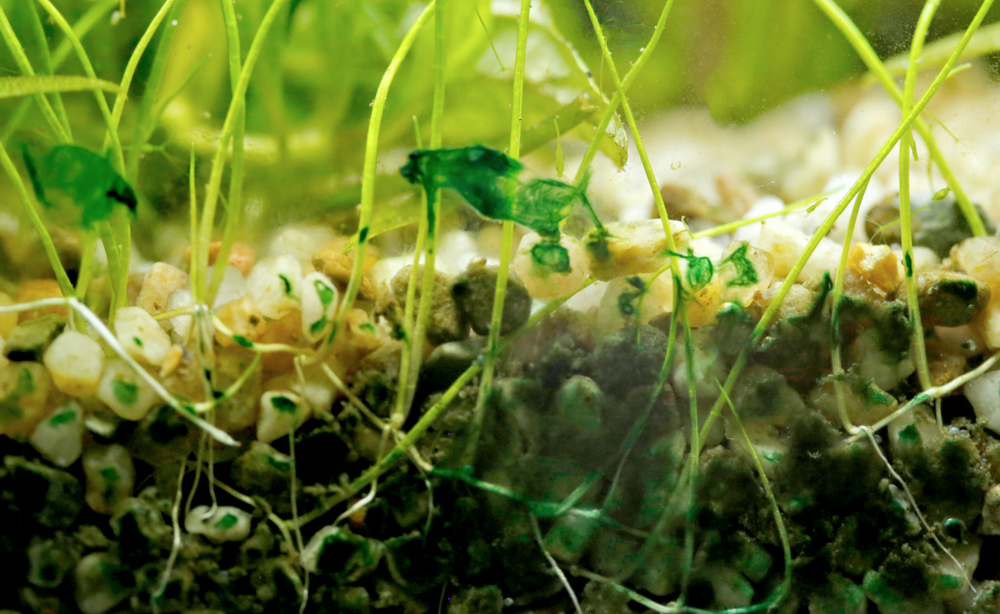 Not a true algae, but a bacteria, blue green algae can be a nightmare to control. Image by George Farmer.

If you suffer from this, then I feel for you. Blue green algae isn’t algae in the true sense, but is a type of bacteria that can photosynthesise. It will quickly drape all that it can in a tank with thin, expansive sheets that often peel away in large pieces. Controlling it is nightmarish, and short of using antibiotics (which are illegal without prescription in the UK) you’ve a long fight on your hands.

In a home tank, the cause is usually a combination of direct sunlight hitting the glass, combined with dirty substrates that harbour rich beds of organic matter. Ammonia can trigger it, and a new tank is likelier to get it than an old one.

To start controlling it, you need to physically remove as much as you can via net and syphon. At the same time, you need to work on substrates to get them scrupulously clean, as any muck down there will entice it to return.

To eradicate it, you’ll need a complete tank blackout for around four days, so turn off all lights and wrap the tank in something dark so that light can’t get in. It’s noted that increasing oxygen levels can also help out, so get an airstone in the tank too. 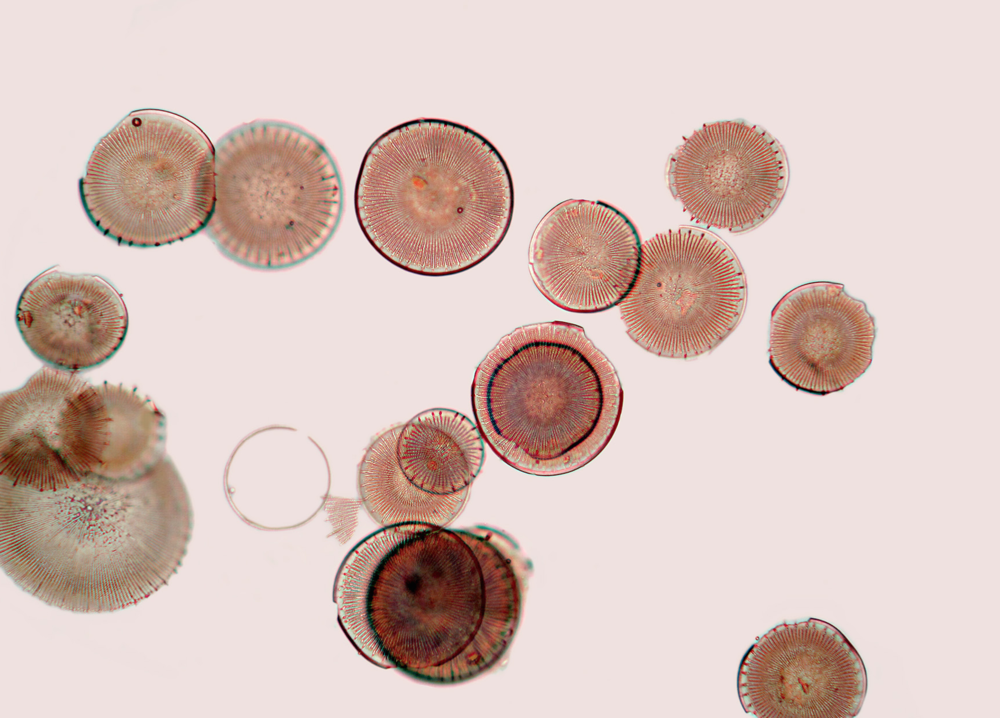 Brown algae is common in newly set up tanks and usually disappears on its own.

This is the most common alga you’ll meet, and it’s formed of tiny diatoms. If you’ve set up a new tank, it’s the first alga that will appear, and is associated almost entirely with the silicates and ammonia that goes hand in hand with an unestablished system.

Brown algae will vanish within a few weeks of setting up. If it doesn’t, that algae isn’t the problem, but rather something is stifling the maturing process of the tank. It may be an issue with the filter, or it may even be excess movement of the substrate. Stirring the base up too often can cause it to linger, but only when the tank is new.

Dealing with it is as easy as getting in the tank with an algae pad, wiping it from the glass or other hard surfaces, and then syphoning out what drops to the base of
the tank.

Though some fish (like Otocinclus) will eat it, the paradox is that brown algae will almost always indicate a tank too immature to keep them. Clean and wait, and eventually the algae will go. 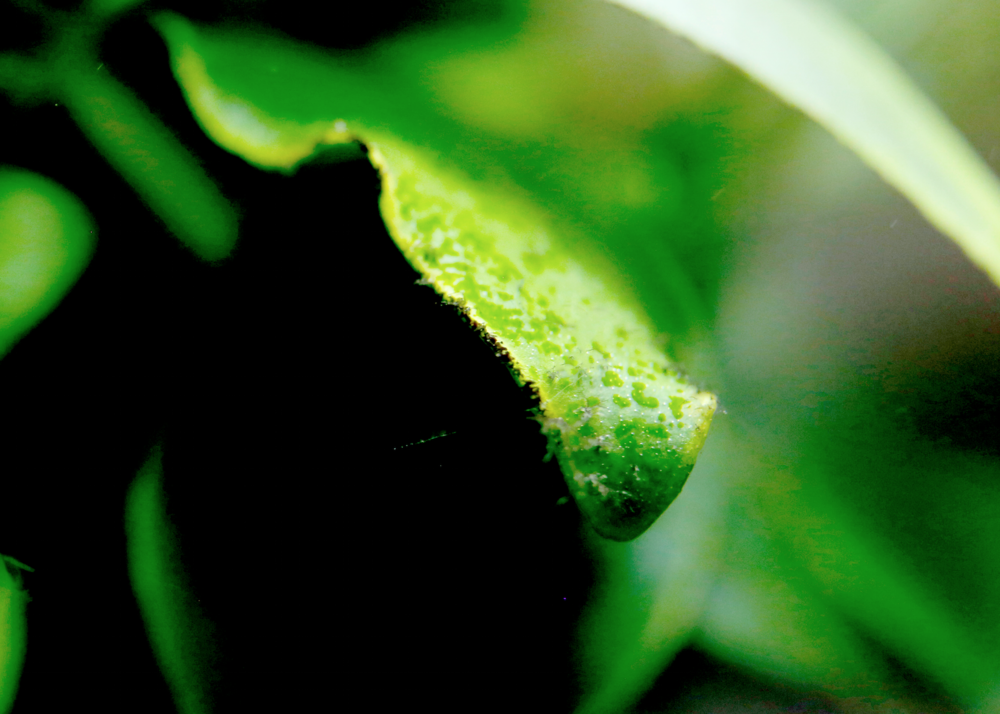 Not to be confused with green dust algae, green spot is more tenacious and stubborn, with larger individual blobs.

In aquascapes, it tends to be associated with low CO2 and low nutrient levels, where in most domestic community tanks it tends to be a consequence of excessive lighting and poor water flow. Bright, near-static tanks are almost always problematic.

To clean from glass, hard scrubbing with a pad or magnetic cleaner will keep it in check, though a razor or plastic edge may be needed to remove it once it gets a foothold.

Green spot algae on decoration will require scrubbing with a toothbrush. Remove affected decor and brush it under running water.

Performing a series of small water changes (10% daily for five days) may help to reduce some of the available nutrients. Cut back on the amount of light during the day — anything over eight hours is inviting green spot. 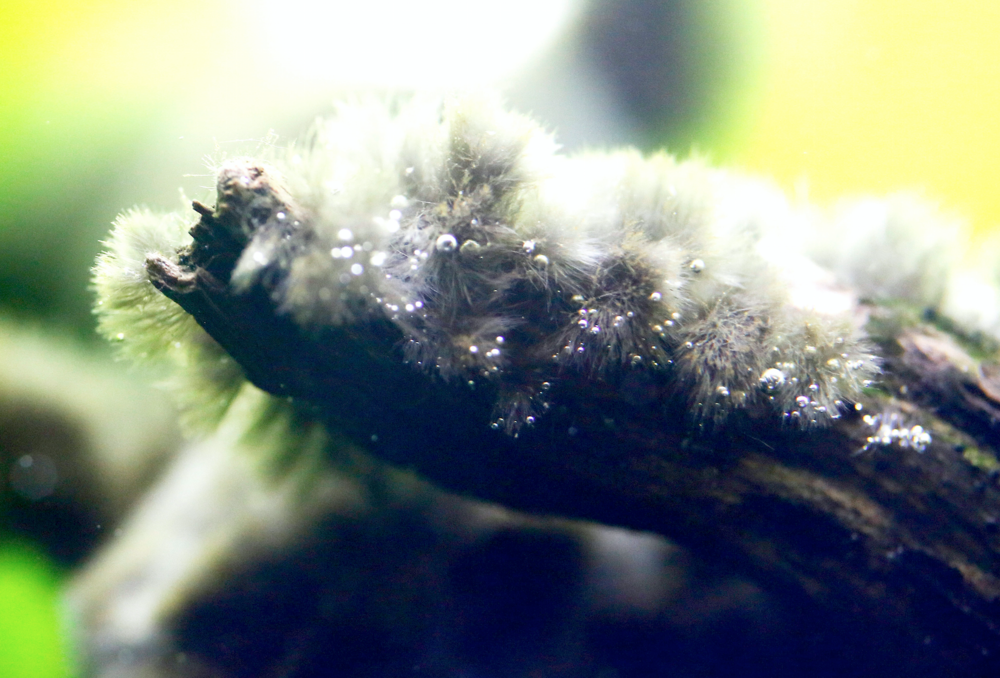 Black brush algae grows on any surface, but is particularly fond of wood. Image by George Farmer.

‘Black’ algae is misleading, as this is actually classed as red algae. In the tank, it tends to be more of a sooty grey, but its presence is unmistakeable. Small, beardlike tufts of dark, fluffy algae will jut from all surfaces, ornaments and plants in a slow encroachment, until eventually the whole tank is smothered.

It’s associated with a few factors in community tanks. High phosphates are implicated, as is inadequate flow of water. Old light tubes in particular seem to promote its growth, and fluorescents over 12 months of age should be replaced to prevent it.

It can often be found living directly on wood, feeding on leeching organics.

Controlling it is nightmarish. Any plants that show signs of infestation should have the affected leaves sacrificed immediately. Any growths on glass should be scraped away with blades or plastic edges, and the tank syphoned to removed the fragments immediately after.

Decor that is smothered can be treated by removing it from the tank and soaking it for five minutes in a mixture of glutaraldehyde (such as Easycarbo, or Flourish excel) at a ratio of 25% treatment to 75% water. After soaking, rinse thoroughly before returning to the tank. Dosing Easycarbo to the tank will help to control brush algae in the long term, as it’s toxic to the algae but not to higher plants.

Water changes will help in some cases, while less water changing helps in others, as will certain fish and shrimps. Try redirecting filter outlets to provide more flow around the tank, or even consider an additional small pump or powerhead to increase movement.

Tanks lacking maintenance are a magnet for staghorn algae. Image by George Farmer.

Looking similar to black brush algae when small, staghorn forms long, antler-like tangles. It tends to prefer plants over substrates or decor, smothering leaves with its growth.
Dirty tanks with sediment trapped in the substrate are desired real estate for staghorn, and toss in slow water flow and ageing lights, and you’ve a perfect recipe for growth.
Cleaning the substrate, removing affected leaves, and treating with glutaraldehyde will all help, as will improved flow rates.

Fish and inverts: Some fish will consume algae as part of their natural diet. In fact, many species have long been marketed as remedies to outbreaks. Here are some of the classics...

Bristlenoses (Ancistrus) catfish are relatively small at around 10-12cm fully grown, and peaceful. They’ll help to reduce levels of spot and dust algae, but will avoid brush algaes. Excellent, hard little workers. Marketed as ‘the’ algae eater, Common plecs will rapidly outgrow most home tanks, and eventually become lazy, preferring commercial fish foods over algae grazing. Not a good choice. American flagfish, Jordanella floridae,  like to nibble at tufts of algae, and they’ll even tolerate an unheated tank of 18°C/64°F or so. On the downside, they’re waspish in a community and prone to nipping tank mates.  Not to be confused with the larger Flying fox, Siamese algae eaters, Crossocheilus langei, are one of the few fish that will graze brush algae from leaves while leaving plants untouched.  Fancy platies, as well as their swordtail and molly cousins, are known to nibble at the fringes of algae growth. Tiny Otocinclus catfish need to be kept in a shoal to have any effect. They clean glass, leaves and decor for brown and green algae, but won’t touch hair algae. Combine with Amano shrimp to cover all angles. 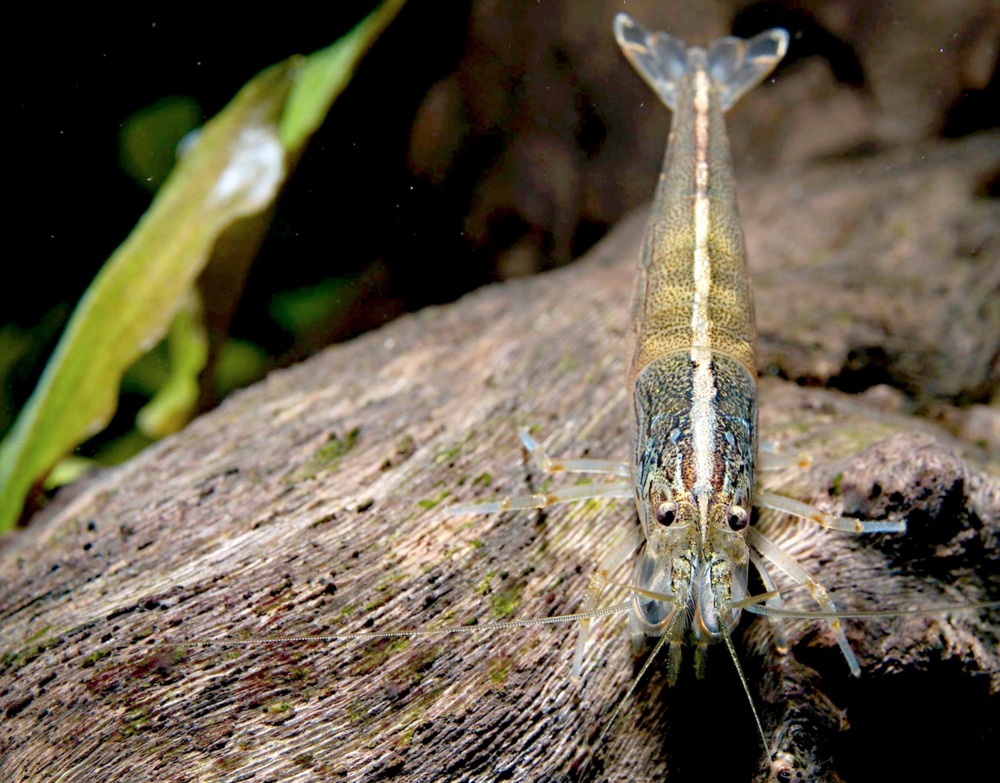 Amano shrimp will eat almost anything with the exception of cyanobacteria, but to have an impact you’ll need quite a few of them.  So-called ‘pest’ snails are actually good at controlling algae levels, though their populations explode if there’s an abundance of food for them.