Thorichthys socolofi is the gentlest of a genus of rather mild-tempered cichlids. Juan Miguel Artigas Azas looks at its natural habitat and how to keep it in the aquarium.

Ross Socolof, the owner of probably the biggest ornamental fish farm in the world at the time, made what proved to be a historic collecting trip to Central America back in 1981.

With buddies Albert Klee, Russ Norris and D. Small he fished in a creek beside the busy highway in the southerly Mexican state of Chiapas, which is some 16 miles south of the famous archeological site of the ancient Mayan city of Palenque.

They dipped, netted and collected a small Thorichthys sp. that really caught their attention. They did not recognise it and thought it might be something new…

They preserved eight specimens from two nearby locations and sent them to Dr. Robert Miller at the Museum of Zoology at the University of Michigan for examination.

He must have also concluded that the species was new, for a few months later he also headed for Mexico and collected many specimens close to where Socolof’s party had found the originals.

The doctor struck lucky at Rio Misala (Mizol-Ha) in Adolfo Ruiz Cortinez, near the Mizol-Ha waterfall, which is a few kilometres upriver from the original Socolof site. As a result Thorichthys socolofi was described in 1984 by Robert Rush Miller and then graduate student Jeff Taylor, based on his and the Socolof team’s material.

T. socolofi is endemic of the middle reaches, below some 300m/985’, of Rio Tulija (the Grijalva-Usumacinta system) in Chiapas, and can be found in the river itself and its tributaries; Rio Mizol-Ha, Rio Bascán and Rio Chamula being examples. The precise distribution ends in Rio Tulija, where T. socolofi distribution ends is not documented. 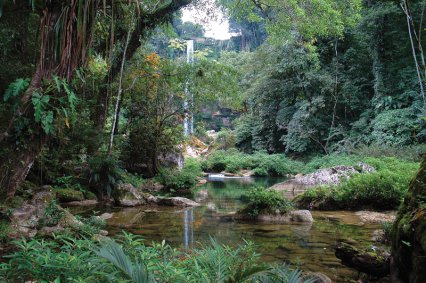 Being of the Thorichthys helleri group (Miller, 1984), T. socolofi only inhabits riverine, clear and oxygenated water habitats, in slow to moderate flowing parts of the streams, although it will always seek a slower flow in them.

Rivers are normally with sand, gravel and rocks forming the bottom, but some silt deposits are found in slower parts. Pools in the rivers are often connected by riffle areas. Areas at the sides or turns of the streams where fallen leaves accumulate are preferences.

T. socolofi is normally associated with jungle bordered, shaded courses of water where very strong rains are common. Rivers are mostly without aquatic vegetation, but aufwuchs are found on the rocks, especially in the fastest flows.

Driftwood is common. Water is normally clear to very clear, alkaline with a pH over 7.5, even to 8.5, and hard. Temperature ranges narrowly from 20-26°C/68-79°F, according to my experience. The warmer temperatures are registered during the end of the dry season between March and May.

T. socolofi is a small Thorichthys with adult males not growing beyond 12cm/4.7”, females no larger than 10cm/3.9”. Males also have longer fin threads. The caudal fin is slightly lunated in adult males, truncated to slightly rounded in adult females.

The body is compressed and elongated, the deepest area at the base of the pectoral fins being 2.2-2.5 times in SL. The frontal profile is convex-shaped with the lower part straight with a small angle set from the horizontal.

A distinctive black oval blotch extends from the base of the dorsal fin to below the lateral line. In frightened individuals it merges with a horizontal bar running horizontally from the eye orbit, forming an L-shaped pattern. A black blotch, if present in the back of the opercula near the base of the pectoral fins, is rimmed in blue in its upper parts.

Breeding coloration brings a contrasting pattern of a light creamy background with nine broad equally spaced dark brown bars that run vertically from the top of the body (inserting half height in the dorsal fin) to just below the lateral line, at the level of the base of the pectoral fin.

The first three bars are found on the upper part of the head, the first two ending on the eye orbits. The fourth bar, behind the centre of the body, is the most conspicuous.

T. socolofi feeds in shallow silt areas and in sandy areas in the riffles. It wanders just above the bottom and picks around rock bases and on substrate, creating small pits.

These are picking fish. Material they collect is examined in the mouth and any inedible matter is expelled through mouth and gills, softer material being filtered by gill rakes. These fish are also carnivorous and are never seen collecting any vegetable matter. 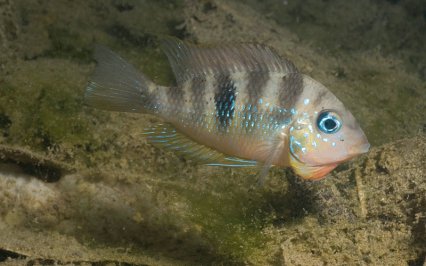 They start breeding efforts in the last months of the dry season, around February when water is clearer, warmer and the flow slower. Breeding may extend beyond July but drastically reduced after May when rains arrive.

Colonies or breeding territories are formed in shallows in the slower currents or on sandy areas that accumulate in river curves where silt is also present and normally layers of dead leaves accumulate.

Pairs live close to each other and territories remain small, probably no more than 60cm/24” in diameter. Apparently males are first to secure a territory and then their colours intensify in a dominant pattern. This is when they show the most beautiful coloration.

Males court passing females by extending their fins and adopting a frontal leaning angle. Interested females court back, fully extending their unpaired fins and rounding the males. At one point they swim side by side, while, with undulating movements, push water toward each other in an apparent effort to show strength.

Once pairs are formed, they clean with their mouths a small 5cm/2” area on a dead leaf or the exposed surface of a rock on which to deposit the eggs.

As with other Thorichthys species, the black blotches at the back of the opercula on both sides of the head intimidate neighbouring pairs or potential enemies into believing they are larger fish. They do so by extending their gular pouches and projecting their gills frontwards. The blotches look like bigger, more separated eyes, making the contender feel it is facing a much larger fish. Thorichthys rarely get involved into fighting, prefering to intimidate.

T. socolofi eggs are ovoid, yellowish, translucent and blend well with the spawning surface. I estimate spawns of some 100-200 eggs, depending on the size of the female who closely guards the spawn. She makes water circulate among them with her pectoral fins and removes fungused eggs, while the male chases away any intruders.

Eggs hatch in about 48 hours under aquarium conditions at 26ºC/79°F. A small pit is excavated by the pair in which they place the newly-hatched wrigglers.

Five to six days later the yolk sac, with which the babies are born, is consumed and the young start trying to swim inside their pits. The next day, with all wrigglers swimming, the pair school them around the territory.

Pairs herd their babies, as do other Central American cichlids, with the female closely guarding and guiding. Signalling is by spasmodic body shaking, and opening and closing of the fins. Males, also signalling, take the lead.

Fry decrease in number daily and when babies reach about Icm/0.4” (about four weeks post spawning, aquarium time) are normally much fewer. Predation pressures, especially by other fish such as Astyanax mexicanus, are very intense.

Babies seem to feed by picking on the surfaces they pass by, and females don’t seem to make any special effort to provide food for their them. Sudden unexpected storms may wash away all babies and breeding efforts have to start all over again,

When the babies abandon their parents, at some 1.5cm/0.6” and after about two months post spawning, they begin to congregate in covered shallow areas of the habitat where they mix with many other young fish. 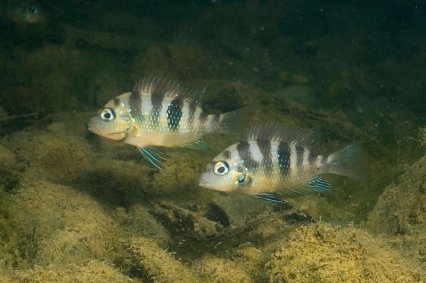 Thorichthys are rather mild-tempered cichlids and T. socolofi, together with T. callolepis, is the gentlest of them all. They rarely pose a danger to any other fish sharing their aquarium, including any conspecifics.

T. socolofi hates low oxygen, bad water quality and conditions over 28°C/82°F. They like cool and oxygenated water within their natural parameters. If water loses quality, bacterial infections and Hole-in-the-Head are just around the corner!

I would not recommend anything less than 250 l/55 gal for a group. As for décor, I prefer somewhat natural looking aquariums with round rocks and driftwood. A fine sand substrate allows them, and you, to enjoy their natural picking behaviour. You then notice the small pits dug on the sandy surface of the aquarium at feeding time.

Dither fish help bring out the keen personality of T. socolofi and I use Poecilia spp. and Priapella intermedia. Any other large dither fish would do just fine. Avoid fish that bite fins though as they can create a counter effect.

Food is no problem. These fish are eager eaters when conditions are right. I consider Thorichthys of the T. helleri group, a delicate fish in terms of diet and, although carnivorous in nature, I tend to avoid diets with terrestrial animal proteins to avoid bloat. It works well for me.

As for breeding, if conditions are right nothing will stop them, and even several pairs can be bred simultaneously. T. socolofi readily span on driftwood, clay pots or rocks in the aquarium and probably even aquarium glass. They do not become overly aggressive at breeding time and you can happily raise a group.

Babies can to be fed from the outset with baby brineshrimp. You may fail the first few times you try feeding as they are shy and nervous, but eventually you will succeed and it is wonderful to observe their full pattern behaviour in the home aquarium. n

Just what makes it  different to the rest?

T. socolofi has been identified as differing from the rest of the Thorichthys species in the T. helleri group (Miller, 1984), to which it belongs, in these following traits:

Unlike T. helleri, T. socolofi does not have yellow markings on the body and fins.

Although pretty much all fish in the shops will be captive bred, this fish has special protection in Mexico but is not on the IUCN red list of threatened species. The habitat remains stable in most of its range but, due to its limited extension, T. socolofi is vulnerable to environmental alterations, even if only moderate.