How to keep the Rhino garra When it comes to bizarre looking, the Rhino garra (Garra bicornuta) is right up there. Matt Ford has the lowdown on this strange fish.

When was the Rhino garra first imported?
It first arrived in 2005 and can now be found on sale with increasing regularity. Other trade names given to it include ‘Tunga garra’ and ‘Lionhead garra’.

Why is this fish so different to other Garra?
Garra bicornuta, Narayan Rao, 1920, is both colourful and looks weird! It has stunning body shades of green and yellow, orange/red markings on the fins and not one — as normal for Garra — but a pair of rostral processes.

These are tubercle development or proboscis-like growths projecting from the head. Most aquarists refer to them as ‘horns’ and this has given rise to the popular name.

It’s also one of several congeners referred to as ‘doctor fish’ because it’s allegedly used as a substitute for G. rufa in some Malaysian health spas.

What are these horns for?
Their exact function remains unknown. Some suggest they may have some hydro-mechanical purpose, but more likely they’re related to reproductive and/or interactive behaviour.

The latter theories seem to be borne out by the fact that they only develop fully in males, and more so in alpha individuals. They’re also flexible and held erect when the fish get excited, for example during sparring. It’s the only Garra to possess more than a single horn.

What about those other differences?
G. bicornuta can further be told apart from similar-looking species such as G. fuliginosa or G. gotyla stenorhynchus by a single pair of barbels. The others all have two.

Another main difference is the blue opercular spot which is always ringed with gold blotches. In mature specimens pronounced tubercles develop on the head and particularly the snout of males, meaning they can also be sexed with some accuracy.

What's their habitat like?
The Tunga is part of the Upper Krishna river drainage and originates in the Western Ghats. It rises from a hill called Varaha Parvata and flows north-east through Chikkamagaluru and Shimoga before emptying into the Bhadra river.

A 2008 survey of the Bhadra failed to record G. bicornuta at any locality other than its confluence with the Tunga, suggesting this might represent the lower limit of its range.

The river winds through valleys and hills covered by semi-deciduous forest or bamboo and is noted for the remarkable cleanliness of its water.

In 2008 the psilorhynchid sucker Psilorhynchus tenura was described by Arunachalam and Muralidharan from Korkanhalla stream, an upper tributary of the river in Khudremukh National Park. The stream contains a mixed gravel/cobble substrate.

G. bicornuta was recorded here alongside a host of other species, including Garra mullya, the hill trout, Barilius canarensis and the barb Puntius arulius. 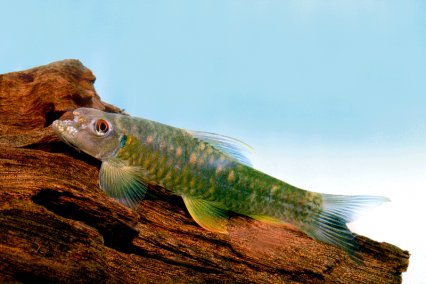 How do I look after it in the aquarium?
It grows larger than many commonly-imported Garra and to a maximum 12-15cm/4.7-5.9”. It’s also territorial, more aggressive than most smaller species and needs a lot of space — a 122 x 46 x 46cm/48 x 18 x 18” fish tank being the minimum size for even a single specimen. The fish I had took up residence in a large driftwood branch which it defended stoutly against allcomers, particularly at feeding times.

For this reason keep one only with robust, agile species such as larger danionins, Puntius barbs, Barilius spp hill trouts or hill stream loaches such as Schistura spp.

Conspecifics or similarly-shaped fishes such as Puntius denisonii, Crossocheilus and other Garra species are OK only for the biggest of set-ups.

Given appropriate conditions Garra usually make quite unfussy aquarium subjects. Water flow should be brisk and preferably unidirectional; a river tank manifold being ideal for the job. Failing that a good-sized external filter/powerhead or two with all the outlets placed at one end will create adequate water movement and oxygenation.

Use sand, gravel or a mixed substrate and add variably-sized, water-worn river rocks for a hill stream-type look. A few driftwood branches, arranged to break the water can also look effective.

These also provide ideal anchoring spots if you want to stock tough plants such as Java fern (Microsorum pteropus), Java moss (Taxiphyllum barbieri) or Anubias spp., though aquatic plants are not a feature of this species’ natural waters.

A tight-fitting cover is essential as Garra species seem to enjoy exploring and sometimes try to leave the water.

Bright lighting should promote aufwuchs which will be browsed on and encourage the fish to behave naturally. Otherwise virtually any dried or frozen foods are taken, although fresh vegetables are usually ignored.

Keep diet varied if you want your fish to show the best coloration and condition. In nature it’s likely to graze on algae, small invertebrates and phytoplankton, as with similar members of the genus, and has developed special adaptations enabling it to do so more efficiently.

What are these feeding adaptations?
Garra are members of the ‘disc-bearing group’ of cyprinids, having a lower lip modified to form an adhesive disc.

This allows them to cling to submerged surfaces in fast-flowing water without using the mouth, so able to continue feeding under almost torrent-like conditions.

Have any species of Garra been bred?
The reproductive biology of Garra is poorly studied and captive breeding of any species is rare. A 2005 study of G. gotyla gotyla in Nepal concluded that the fish spawn throughout the monsoon season and may be migratory, swimming upriver before depositing their eggs. 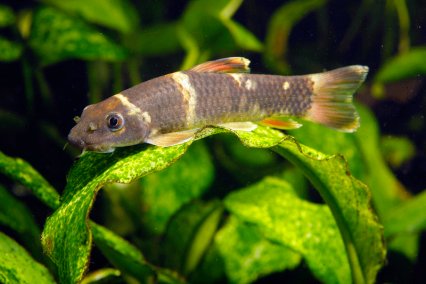 G. rufa is produced in commercial quantities for health spas via hormones, but Garra flavatra (pictured above) and G. ceylonensis have been bred naturally.

The endangered Sri Lankan endemic ceylonensis was the subject of a 2005 study which determined an appropriate means of artificial reproduction for conservation purposes. The adults were conditioned in groups before reverse trios, consisting of a single female and two males, were isolated in smaller 60 x 30 x 30cm/24 x 12 x 12” tanks.

Spawning was initiated by switching off the aeration and the adults removed once eggs were spotted. The only courtship behaviour was intense chasing and the spawning tanks had to be covered to prevent the fish jumping out.

Eggs hatched in 36-48 hours at 26-28°C/79-82°F and the yolk sac was absorbed within four days. The fry did not have an adhesive disc and initially swam in the water column. Disc development took between 60-64 days and once it was fully formed the young assumed a more benthic lifestyle.

During the free-swimming stage the researchers found they preferred bottom feeding and favoured formulated foods over live Artemia nauplii or microworm.

G. flavatra is possibly the only species currently bred for the trade. Adult pairs are separated into smaller tanks of highly-oxygenated, running water. The fry are first fed an egg yolk suspension until big enough to handle Artemia nauplii.