How to keep headstanders in the aquarium Bob Mehen would turn somersaults for the headstanders â€” a group of fish that move in mysterious ways.

The characins form a wonderfully diverse group, ranging from tiddlers to monsters and contain everything from Neon tetras to piranhas — and much in between!

There are, however, some stunning members that offer not only colour but behaviours which make them fascinating and beautiful aquarium subjects. The headstanders are just such a group.

These earn their name by posturing heads down, tails up, when swimming, but it’s not altogether clear why they do so.

Two families are commonly known as headstanders — the Anostomidae and the Chilodontidae — both from the Amazon region of South America.

Most in the hobby come from the Anostomidae family, the larger of the two. This contains around 150 species, varying from 7cm/2.8” to 60cm/24”.

Many of these fishes have sleek, torpedo-like bodies, beautifully marked with striking bars, spots and stripes which, in combination with their unusual swimming style, makes them potentially attractive aquarium inhabitants.

At first glance these fishes’ pouty, up-turned (superior) mouths suggest a life spent picking up tasty morsels from the water’s surface, but this couldn’t be further from the truth.

Instead it offers more than a hint as to their specialised natural feeding behaviours. 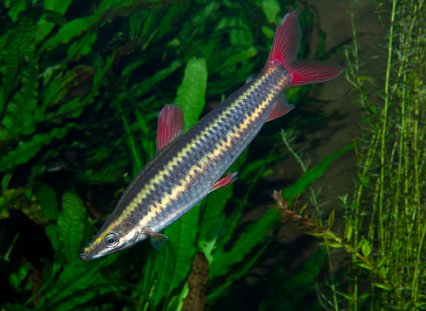 Why headstand? (picture above by Brian Gratwicke, Creative Commons)

A number of factors and potential influences may benefit this strange action. Many have a swimbladder set further back towards the tail than in most fish, which is clearly an adaptation to make this unusual swimming position easier, but it’s why that is the mystery.

There’s obviously something to be gained in the form of cryptic camouflage by adopting this position, maybe in a similar fashion to the marine Razorfish (Aeoliscus strigatus) whose head-down swimming style allows it to blend in among corals.

Many potential predators may be confused by a fish not following what they instinctively see as typical prey behaviour, and some feeding headstanders can appear sick as they lurch about, tail up, often upside-down as they search for food.

Could this peculiar posture mean that predators don’t recognise them as possible prey?

Given the striped patterning of many of these fish, swimming in this fashion means their shape is broken up among plant growth, or in among the rocks, crevices and branches that these fish feed and seek refuge in in the wild — so it’s possible, but no one really knows.

Headstanders tend to be constant grazers of algae and its associated micro-fauna, and observations of them feeding in the aquarium and wild show they are happy to swim upside down as they seek out tasty morsels in cracks, fissures and other hard-to-reach places. This position allows them that extra manoeuvrability, to be more successful in their search.

They are nevertheless capable of conventional swimming when there’s the need for speed.

Arguably the most attractive species for sale is the Striped headstander (Anostomus anostomus) pictured at the top of the page. This handsome fish has a golden yellow body, marked by three black bars running from nose to tail, complemented by blood-red fins. The bars get wider as the fish matures, with adults growing to around 20cm/8”.

Less common is the initially similar Anostomus ternetzi. However, this seldom gets bigger than 12.5cm/5”. It also it lacks the red fins of its larger relative, but is a more peaceful fish. 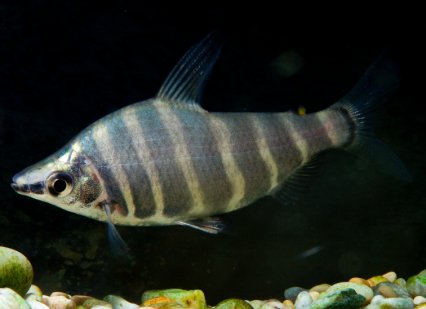 Another species regularly seen in the hobby is Abramites hypselonotus, commonly called the Marbled headstander. This is easily identified from other Anostomids by its comparatively deep, laterally compressed body, especially in mature specimens.

Growing to around 12cm/5” they are a bronze yellow divided by a series of brown vertical bars, giving them a marbled look. These bars are sometimes broken, but, like their showier striped relative, they become wider with age.

The yellow can sometimes fade to a greyish tan in older fish and the markings spread into all the fishes fins, except the tail and pectorals which are clear. 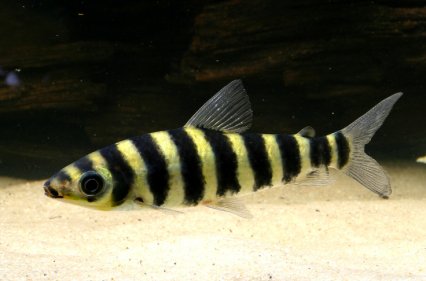 Leporinus fasciatus, the Black banded leporinus, is a striking Anostomid. This is one of the larger members of the family and while the headstander tag is something of a misnomer as they seldom swim tail up, they’re still lovely fish.

Growing to around 30cm/12” their bright yellow body is divided by ten vertical black bands. It can be confused with the similar and equally attractive Leporinus affinis, but this fish only has nine bands and grows smaller. Young of both species have fewer bands which split up as the fish grows. 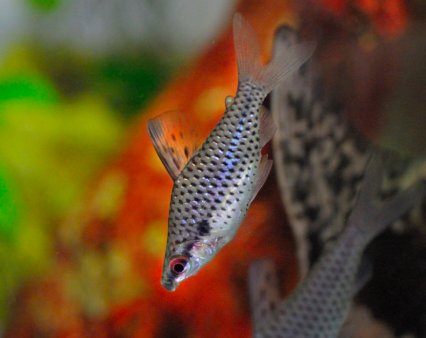 The other headstander family is known as the Chilodontidae and only two members are usually imported. While both are duller than their Anostomid cousins, they are none the less attractive fish.

They are, however, the subject of confusion. Usually the fish in the shops are sold as the Spotted headstander (Chilodus punctatus) but many sources now feel this fish is the similar looking Chilodus gracilis, sometimes called the Black line headstander.

The biggest difference between the two is the prominence of a dark band running along the middle of the fish, which in C. gracilis is always present, but comes and goes on C. punctatus and is most obvious during breeding behaviour.

The two species are similar in most other ways, having a silvery grey body set off by a black dot at the root of each scale. Both have reddish eyes, and a black blotch on their dorsal fin and both grow to around 8cm/3.5”.

If anecdotes are anything to go by, it may be the case that Anostomus anostomus have basic counting skills.

Some keepers state that they should be kept in odd numbers to minimise aggression, but sceptics may feel otherwise.

Anostomid headstanders have a sometimes deserved reputation for being nippy, particularly to their own kind or similar looking fish. You can however prevent, or at least lessen the impact.

Like many notoriously nippy fish such as Tiger barbs (Puntius tetrazona) this anti-social behaviour can be stopped to a large degree by keeping these fish in sufficient numbers. This should be considered when purchasing.

If you don’t have space for at least six, it’s better to keep them singly. Consider tank mates too and avoid potentially obvious nipping targets such as angelfish and other slow moving, longer-finned species, as well as those with similar coloration or patterns to the headstanders.

Suitable would be robust, but gentle cichlid species, such as Severums, larger, fast moving characins like Silver dollars and armoured catfish including doradids (talking catfish) and loricariids (plecs).

Chilodus are far more peaceful and only really prone to a little squabbling among themselves, which again can be minimised by increasing numbers kept.

Potential tank mates include dwarf cichlids such as Rams (Mikrogeophagus ramirezi) and Keyholes (Cleithracara maronii), Corydoras, tetras and hatchetfish such as Carnegiella marthae.

These are all grazers whose diet includes large amounts of plant and algal material, so they’re not great choices for the planted tank, although more robust plants may survive if these fish are well fed.

A diet rich in vegetable matter such as cucumber, lettuce and spinach should be supplemented with frozen food such as Daphnia and bloodworm, and commercial dry foods, particularly those rich in Spirulina algae.

Décor should include floating plants, especially where lighting is bright, as well as branches and rocks to provide cover and potential hiding places.

They all do best in soft water on the acidic side of neutral with a temperature of around 25°C/77°F being ideal.

Headstanders can be sensitive to poor water conditions, so stay on top of maintenance and carry out regular water changes.

All the species featured here can become jumpy if disturbed, so place their tank somewhere quiet and make sure you have tight fitting cover glasses. 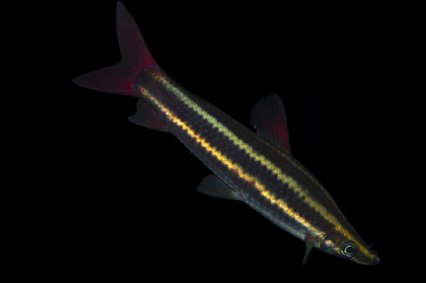 How much do they cost?