How to keep Apistogramma baenschi A Japanese aquarist called Karatsu introduced a special little addition to the hobby in 2002. He had found Apistogramma baenschi and given it the common name of the Inca cichlid.

The discovery was made after Karatsu and some other Japanese fishkeepers had travelled to Peru and explored around the Rio Mayo near the town of Tarapato, catching specimens in small blackwater forest streams.

Particularly unusual about the collection locality was its height — 800m/2,600ft above sea level — and the surroundings more closely resembled those of the Asian rainy forest mountains than typical lowland South American forests.

A couple of years later, Dr Uwe Romer and co-authors described the species in a German aquarium magazine, naming it Apistogramma baenschi in honour of Romer’s publisher friend Hans Baensch.

The basic body coloration of A. baenschi is yellow with three to seven contrasting black lateral stripes. They also have a small blotch at the base of the caudal fin.

These dwarf cichlids are characterised by distinct sexual dimorphism and dichromatism — so males and females differ markedly in colour and size. Males have a deep body, massive snout with prominent fleshy lips, elongated rays at the front of the dorsal fin and a blood red edge to the tail.

Females are smaller and less colourful, their dorsal fins are not elongated and half to two-thirds of the pelvic fins are black. They also have a black spot at the base of the pectorals and this becomes prominent when they are brood caring, probably emphasising that they are territorial and aggressive. 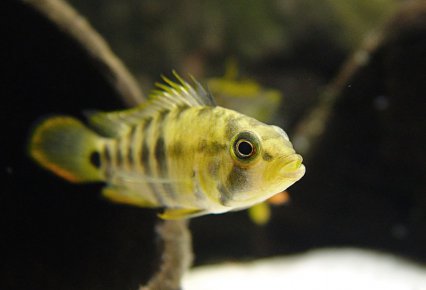 We don’t yet know the full distribution of this species. It occurs in the catchment of the Rio Huallaga in north-western Peru, as well as in the Rio Hanusi, Rio Paranapura and Rio Huallaga. My fish were said to have come from the Yurimagues area of Peru.

Most in the aquarium trade are said to come from the area south-west of Iquitos between Lagunas and Tarapato.

All these fish live in shallow forest pools with a substrate of leaf litter and decomposing wood. They prefer cool, very soft water and, according to Romer, their peaty blackwater habitat has a pH ranging from 4.1 to 6.3.

Apistogramma baenschi enjoy picking over the substrate for food, so the tank should have a substrate of fine sand. Bogwood and plants, such as Amazon swords and Java moss are ideal.

They should be kept in groups of ten to 20 and will happily co-exist with Corydoras and other dwarf cichlids as these can help to make them less timid.

Pay special attention to hygiene and weekly water changes are a must as in dirty tanks they may develop diseases, including ulcers. Unfortunately, dwarf cichlids can be sensitive to medicines, so if they fall ill you may have little chance of curing them. 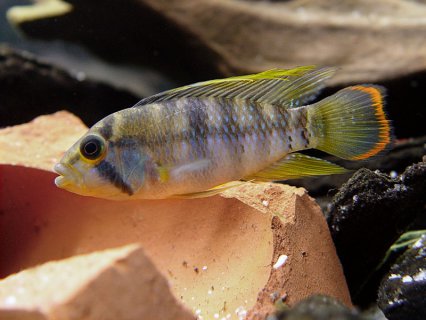 Wild fish quickly become used to flakes and granular foods based on plants and crustaceans.

They usually take food that has fallen onto the substrate, but some courageous specimens may feed from the water surface. Mine have frozen black mosquito larvae and Chaoborus.

A. baenschi diet should be enriched with spinach, Daphnia and adult brineshrimp.

All Apistogramma baenschi currently in the shops are wild caught and, so far, shipments comprise mostly females. This is useful, allowing the fishkeeper to obtain groups with the right sex ratio of more females than males.

Soft acidic water is the most important consideration for effective breeding.

People managing to spawn them did so in water with a pH of 5.5-6.0, a hardness of 2GH and temperature around 25-26°C/77-79°F. I recommend using a UV steriliser to reduce the levels of pathogens and prevent the eggs becoming infected by fungus.

Care of the offspring is much as with other Apistogramma species. Most females spawn in the chosen area with their partner and care for the fry — possibly over 100 — usually without the male’s help. Sometimes they allow him to participate in brood care but he is usually driven away.

The offspring will take baby brineshrimp and Panagrellus and grow surprisingly quickly. After two weeks or so they start to develop the distinctive lateral stripes and become sexually mature at about four months.

According to Apistogramma authority Dr Uwe Romer, these cichlids have the typical characteristics of members of the Apistogramma cacatuoides complex. For example, males have a relatively big mouth for an apisto with thick lips and a distinct maxilla.

They also commonly display a threat posture by which the mouth is held wide open. The red stripe on their tail, though, resembles the closely related A. nijsseni.

The fish are therefore believed to be members of the nijsseni sub-group within the cacatuoides complex.