How to create a multi-tank set-up - with plastic plants! Dean Barratt's trio of plastic greeneries complement each other perfectly. Nathan Hill marvels at the results.

I’ve seen Dean Barratt work on two set-ups before and both featured in previous issues of PFK.

His first was an aquascape using nothing but plastic plants in a Juwel Rio 240. It left me gobsmacked. The second was an audacious paludarium: half water, half land and a repeat run of plastic plants. It looked fantastic.

This latest project was the result of a conversation between Dean and PFK editor Jeremy Gay. This time around we wanted to see what he could deliver if we asked for him to create the triptych — that rarely seen but strikingly effective three-tank layout, when done right!

The end result is a fascinating talking piece and one which can lend itself to a wide variety of fishes — and all at a cost comparable to a single, larger aquarium of similar volume to these three combined!

The wonderful thing about a set-up like this was the time taken to put it together. Dean had to work at short notice to get things together in time for the PFK visit. In the event he worked over a single afternoon and late into that evening to create what we see here.

Instant greenery, instant appeal, no tiresome waiting for plants to grow in to see if they work in the layout, and, most of all, no laborious regimes of feeding, gas dosing and trimming. 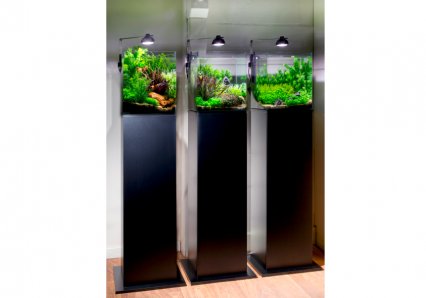 It goes without saying that Dean’s aim was to produce a visually captivating trio, but there’s far more to it than that. He wanted to present three tanks that not only worked as a collective, but also as a trichotomy, with each tank a display in its own right.

Even more, Dean aspired to make tanks that worked as respective pairs, with the left and centre tank forming a display that could be viewed as very different from the right and centre coupling.

Initially the aim was to produce a ‘Z’ shape of hardscape, starting high in the corner of the left-hand tank, trailing through the centre line of the middle one, before turning back on itself in the right hand display and creeping back into the centre again.

Confused? It makes no odds, as Dean experimented with the idea but never ran with it!

However, as good as this would have looked with an Iwagumi, low-laying approach to planting, Dean had more intense efforts in mind and found there was too much hardscape to work around.

Eventually, his design led to just four pieces of Mopani spread over the three tanks, with only a light placement of the stone.

This he felt worked much better — not competing with the planned plants, and, in the event, he found that much of the hardscape was lost behind the synthetic growth.

Dean wanted to use wood as Amano does, where the ochre tones are complemented by green hues of plants and vice versa. 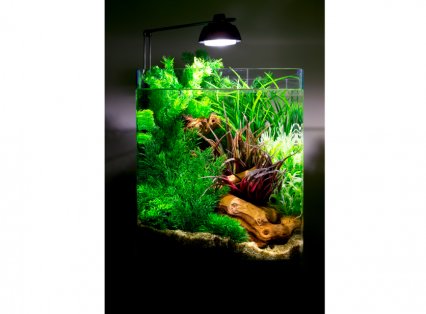 The eureka moment finally came when he was playing with the tall grasses and water ferns in the left hand tank (pictured above) and central tank (below). These rapidly became Dean’s focal point and a starting platform from which to layer all the rest of the layout. 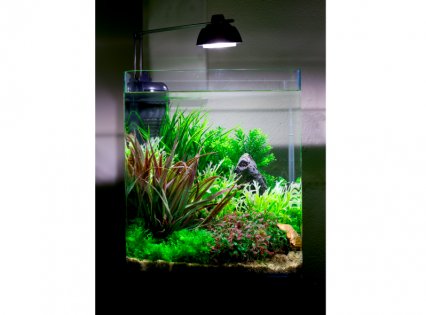 Note that when arranging plants Dean uses the same kinds in two tanks, but not the third (pictured below), so there’s a gradual transit. It’s all very subtle… 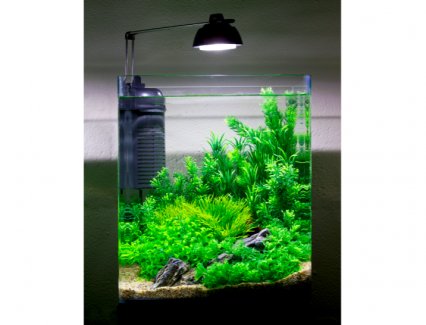 Dean’s biggest issue was with the bulk and boldness of his own plants and the reason why any kind of Iwagumi attempt was rejected.

Here, the boisterous shapes of the wood work well with the brazen effect of the fake plants.

A loud and punchy tank was by far the safest option.

We noticed how Dean was prepared to cut his plastic plants into smaller portions, so freeing him up with just what he could fill in and where.

Rather than being restricted to ‘growth’ from the bases, he opened up a new dimension in plugging gaps and adding sprigs of shape and colour — a technique we’re now eager to try out ourselves.

What fish would suit this set-up?

This set-up was put together long before any cycling could have taken place, so the tank had no fish when we visited.

However, Dean considers White Cloud Mountain minnows a good option as they will not clash with the planting levels.

Whatever fish we’d opt for it would have to be able to tolerate unheated tanks, as these three were set up in the absence of any heaters.

Space is an obvious consideration, as each of these 35 l/7.7 gal tanks can hardly be thought of as huge.

As for this author’s input, I’d slip discrete heaters in the tanks anyway and get some Galaxy rasbora swimming among those colours. Stunning!

How Dean created his triptych 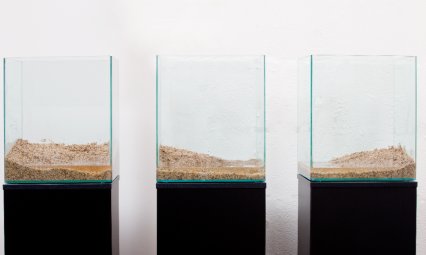 1. Unipac Silica sand is added; 8kg in the left tank and 6kg in each of the others. It will all be partly displaced by plant bases. 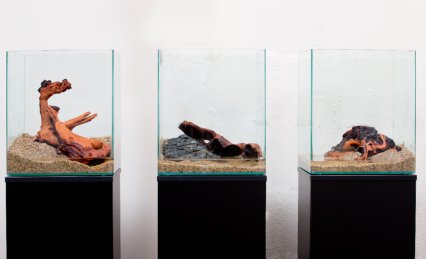 2. Dean adds the core aquascape of four small Mopani woods, as well as a central slug of Seiryu rock. Much will be hidden. 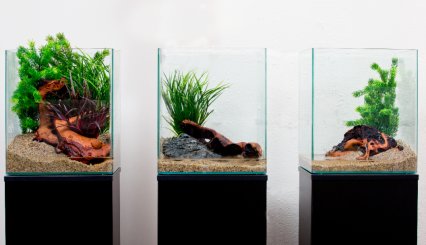 3. The bulkiest of the background plants are added and the initial sloping shape starts to form. Note the plants breaking the surface. 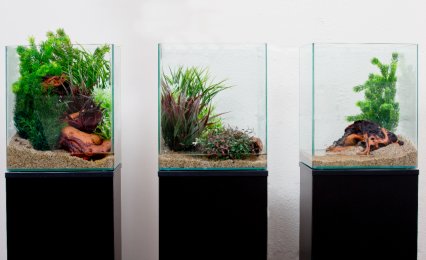 4. The central and lower feature plants are added, dominating the wood in the first tank. We now see a definite slope taking shape. 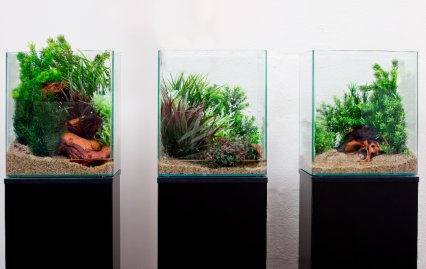 5. Shaped, lower background plants are placed to bring centre and right hand tanks together, and make an unbroken visual curve. 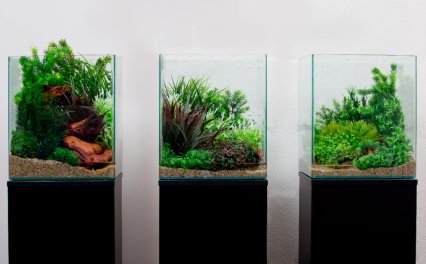 6. Foreground plants are now added, smoothing the contrast of some exposed hardscape. Note the use of various shades to best effect. 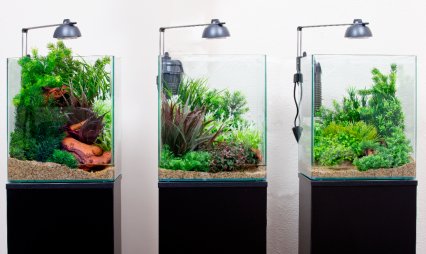 7. The hardware is rigged up to the Eheim tanks and now all three are lit to show exactly what the final illuminated effect will be. 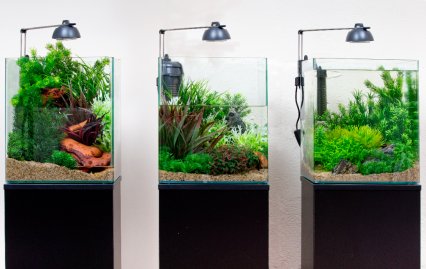 8. After some final tweaking the water is eventually added, alongside pieces of Seiryu stone originally omitted from the design.

How does your plastic garden grow?

Fancy recreating these three tanks for yourself? This factfile will give you an idea of which plants you’ll need;

Some broken moss ball worth a maximum £5

Tanks like these have an immediate advantage over living, breathing counterparts — they don’t need food!

Some can argue that with real plants, pollutants, such as nitrate, are kept much more in check, although with light stocking levels these tanks could safely manage — and, with regular water changes, these displays could be kept looking fresh.

Dean says for tanks like these he’d run a 35-40% water change every three weeks or so.

Given that those plants don’t need light to grow, another problem can be avoided — and that’s algae growth. There’d be no problem keeping these three in some ambient illumination until you got home from work, and then had the lights running for your viewing pleasure during the evening.

Of course, less light means reduced algae, which, in turn, can mean much less work!

The plants will need a clean maybe every four months and, for all three tanks, Dean estimates it will take around two hours for everything to be completely scrubbed.

Of course, specks of more stubborn algae will start to build up here and there, and you’d probably want to think of changing the worst affected ones every four or five years for fresher versions.

It may seem like an expensive way to get an instant result but, as Dean points out, an initial outlay on live plants can also be high, and once CO2 and fertilisers — not to mention expensive substrates — are factored in, he insists it can be a much cheaper way to have a tank with not only instant appeal but staying power.

Eheim for making the project possible. The Eheim tanks and cabinets were supplied by J and K Aquatics. Thanks also to Unipac for the Congo sand.