How much swimming space do your fish need? All aquarists have to consider the size of tank they should have for the type of fish they want to keep. Face and answer this issue before buying any new fish!

Every aquarium has a biological ‘carrying capacity’ which, if exceeded, will result in deteriorating water quality. Each one also has a ‘territorial limit’ There’s also the question of how much swimming room does each fish require to remain healthy?

All aquariums are imperfect recreations of nature. In some ways they are better — there’s no predators but always food! Yet captive fish may have little swimming space and higher parasite loading.

One school of thought declares that unless the fish shows signs of damage from being too confined, it isn’t too crowded. Another maintains that since the fish has a whole ocean or lake, it must have plenty of space to remain 'happy.'

Because surgeonfish, parrotfish and the like often range widely in search of algae, some aquarists feel they must have very large aquariums. While true to a point, beware of misinterpreting this 'need' for swimming room.

Zoo critics may say: "Elephants often walk up to 50 miles a day in their native land. Since your zoo is nowhere near as large, it is cruel to keep them in such a small space".

However, they need to walk that far in Africa to find enough food and water. If they don’t, they die! It’s the same with many species of fish. Yet given a food ‘hot spot’ they are content to hover.

I’ll examine the need for room by determining the values for the three necessary variables: tank measurement, body style of species and expected adult size.

What is the expected maximum size of our captive fish? Many aquarists use FishBase to work out captive size estimates from that data. However, FishBase records are for maximum sizes recorded, not normal adult size  — and many fish do not grow as large in captivity.

To test the ability of FishBase to reflect normal maximum captive sizes of adult fish, specimens at a public aquarium were used as a comparison. None had grown appreciably in the past two years, so had reached full size, and all had been captive at least five years. There were 19 subjects, (see below).

Next step was to express current length of each as a percentage of listed maximum adult size for that species, as listed on FishBase. It was determined that the fish had reached full captive adult size in a range from 45-91% of the maximum FishBase size for each species. The average was 66%.

So it seems that if people are using the FishBase maximum size records to estimate how large a fish will grow in an aquarium, it appears more accurate to use two-thirds of that value as the captive maximum.

There are exceptions. Some small tetras, gobies, clownfish and other species that may live longer in captivity than the wild will sometimes exceed maximum wild sizes. Aquarists more conservative in calculations could use 80% of the stated maximum value.

Next step is to determine the body style of the species in question. Aquarists can use the chart to determine categories for any similar species. Basically, sedentary fish would comprise the first category, typical highly maneuvrable fish the second and the final category would be reserved for pelagic and open water swimmers.

These are suggested examples of fish for each of the three swimming style categories: 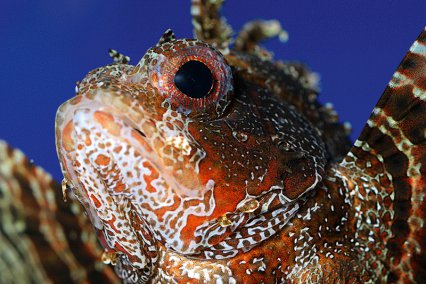 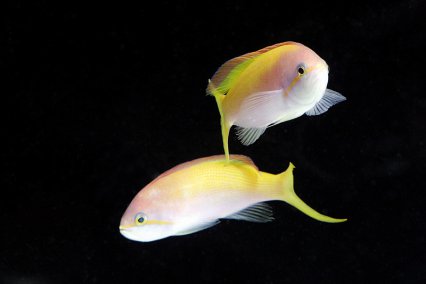 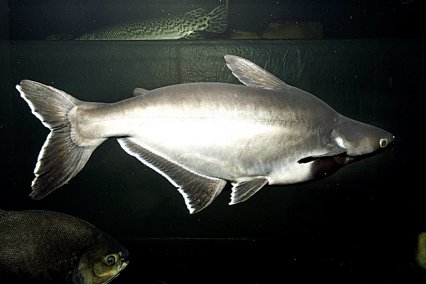 Now for aquarium size. It was initially thought that using the aquarium’s length x height x width would work to compare different aquariums. However, we’d end up comparing aquarium volume to the linear measure of the fish. This does not work because as the length increases linearly the volume increases by the cube, rendering the numbers meaningless.

Since most aquariums have a height proportional to length and width, it was decided to remove the former from the equation. Therefore, the length plus the width value is linear and can be compared to fish length.

One final factor is that many aquariums, especially reefs, include solid decorations which reduce room. So to obtain accuracy, the aquarist would take the width of open water area and add it to the length of that area.

The basic equation reads open water tank length + open water tank width/maximum fish length. This result is then expressed as a ratio then compared to a data set for fish from currently properly operating aquariums (N=50). For each of these three body styles, an absolute minimum and a preferred minimum ratio was determined:

These are the lengths of those 19 captive fish as a function of the percentage attained for maximum size of those species as listed on FishBase: 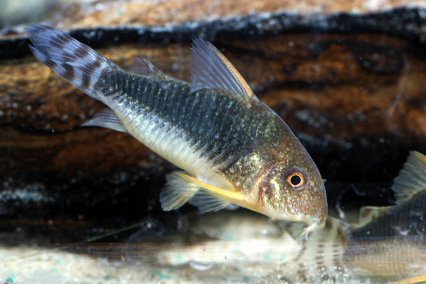 What defines a 'happy fish'?

When somebody says "you need to do X, Y and Z to keep your fish happy" or "your fish cannot be happy in that size of tank" what do they really mean?

Are they using the term 'happy' instead of 'healthy' or 'proper well-being'? Do they really mean to imply that true happiness can be identified and then quantified in fish?

I may use the term 'that fish sure is unhappy' to identify one being bullied by a tank mate. I really mean 'that fish has an ongoing territorial conflict with a tank mate. It is exhibiting a depressed demeanour and its well-being is compromised. If something isn’t done to change the situation, that fish’s health will be affected, eventually to morbidity, followed by mortality'. It’s so much quicker, but less precise, to say 'unhappy'.

An animal rights advocate may look at a single fish in a tank and exclaim, ‘how unhappy that fish must be, all alone in that small tank’. I suspect he or she refers not to the fish’s well-being and health, but that it is truly unhappy in the mammal paradigm of how the word is generally used in the English language.

If somebody says, "Regal tangs, Paracanthurus hepatus, need at least a 150 gallon tank to be happy" they are not using the word instead of 'healthy' if that same tang can be kept healthy and problem free, long term, in a 340 l /75 gallon tank. They are adding an additional layer to the definition — and one that cannot be measured or quantified.

I’m not condoning keeping fish in small aquariums, I just feel you cannot formulate tank size requirements based on intangibles such as the 'happiness' of a fish.

If you feel that this example fish is so much happier in the 150 gallon tank than the 75 gallon that the smaller tank becomes a non-starter, then it follows that the fish would be so much "happier" in the wild and shouldn’t be in an aquarium at all.

This is my definition of appropriate aquarium husbandry — and this equates to ‘happy’ for a captive fish.

If it shows no signs of chronic disease or abnormality, exhibits normal feeding and reproductive behaviours and, most importantly, exhibits a normal lifespan compared to that of wild counterparts (minus predation!), there is no other parameter we can use to determine if a certain suite of husbandry techniques are or are not suitable. 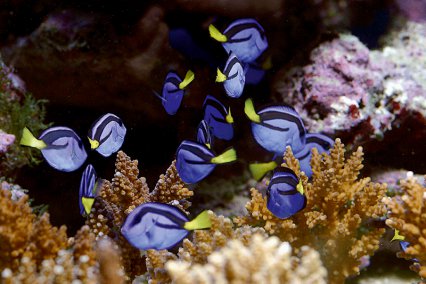 Some aquarists have for many years been active on Internet message boards advocating larger aquariums for tangs. Dubbed the Tang Police due to their strong-arm tactics, they gang up on the uninitiated and anyone else who dares challenge their assertions.

They have set unrealistic minimum sizes for aquariums they feel should house tangs, based primarily on opinion and not any real world data. It confuses many why these people advocate so vociferously for tangs, but ignore other species of fish that require substantial swimming space, notably parrotfish and wrasse.

People rarely admit they belong to this loose affiliation, but comments such as, "I just care about tangs, so if that makes me a member, then so be it," are commonly heard. Additionally, people can become 'temporary charter members' when they join a pile-on where everyone is being highly critical of some poor person who becomes ‘arrested’ by a member.

Not everyone approves of their tactics or their message. In one classic case, a person identified some members of the Tang Police and went to their online photo areas and discovered pictures of some of their tanks showing tangs in what the “police” would tell others are undersized!

Some of these "police" may be well meaning, but many simply have the base motivation of putting as many beginners into their "Fishy Internet Jail" as they can! 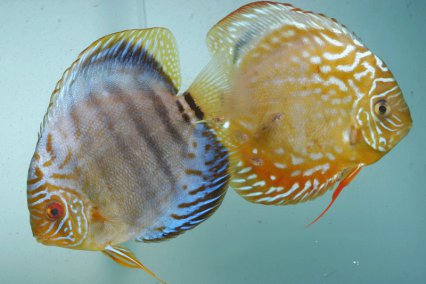 Fish have a variety of caudal (tail) fin shapes and a few have none at all. In some cases, the basic caudal shape can help predict the relative amount of swimming space a particular species may need.

Fish with lunate (scythe-shaped) fins are more typically open water swimmers that cannot turn well. Examples would include jacks and tuna. Those with crescent-shaped tails, such as some tangs and Moorish Idols, can manoeuvre a bit better but can still swim fairly rapidly in a straight line.

Fish with squared-off tails, like marine angelfish and Discus, are slower but more manoeuvrable.

Fish with soft, rounded caudal fins, such as Percula clownfish and dottybacks are slower swimmers but highly manoeuvrable.

There are exceptions. Some adult male anthias, cichlids and wrasse develop streamers on their caudal fins that make them look like open water swimmers, but are really 'all show and no go'.

Other fish, such as wrasse and parrotfish, do not use caudal fins as their primary method for propulsion, so the shape of that fin cannot help with any predictions.

We fiddled around with Jay’s swimming space requirements equation so that we could use it to recommend a minimum and a preferred tank size — and to get some idea of how usable it is in the real world.

The equation seems to provide tank space for some species that would widely be considered acceptable, possibly even larger than typically recommended. However, it doesn’t seem to work perfectly on smaller species.

Or rather, most would perceive the tank as being too small, even though it's no different in terms of scale to the proportionally larger tank sizes recommended for bigger species.

Although the recommended tanks are proportionally in keeping with the recommendations given for larger fish, they do seem excessively small. However, the same can be said about the well-known 'six-times rule' we’ve previously pondered.

We are not recommending that you adopt it, but it’s certainly an interesting theory, and one that has some research behind it to back up claims. With a little more work it might yield some really useful results. See below.

Let us know what you think.

This article was first published in the July 2009 issue of Practical Fishkeeping magazine. It may not be reproduced without written permission.