How do fish get from rivers into your aquarium? How do the fish get from rivers into your aquarium? They don’t magically appear in stores, after all. Daniel Konn Vetterlein recounts some of the techniques used by collectors when catching fish in the wild.

Have you ever wondered how the fish you keep at home were collected from the wild? I’ll wager you probably did, but if you didn’t it’s well worth doing so, because collecting fish is an art in itself and several techniques need to be mastered to end up with a healthy and successful haul. Furthermore, it is not just a question of techniques — the time of day you are out collecting is a crucial factor. In recent months of PFK we have looked at a whole range of species whose catching methods are worth of a deeper investigation. 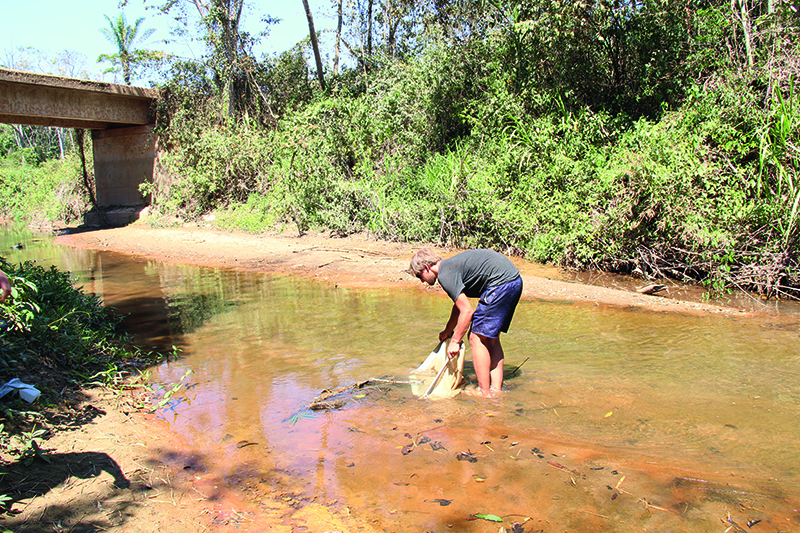 Of course, the first fishing tool that will come into everyone’s mind is a net, something which we’ve all handled at some stage of the hobby. But which one is the right choice: dip, seine or cast net?

Dip nets, much like the head of the nets often used for catching koi from ponds, are perfect for small biotopes with a low water level and limited space to move around

Imagine yourself standing in a knee-deep, almost dried out small stream. Deep leaf litter covers the bottom, while branches (usually covered with painful thorns or spikes) and fallen trees dominate the biotope. This is where a dip net is the only method to achieve satisfying results, and small cichlids like Apistogramma, many killifish like Rivulus, and small catfish like Bunocephalus are usually hand-caught this way.

Depending on the species you are after, you are unlikely to scoop up hundreds in one go. Using this method you’ll collect few specimens at a time, and sometimes possibly in pairs. Again and again, you push your dip net under water, move it towards the water’s edge, incorporating a little weaving with some curves from left to right along the way, slightly swirling the leaves up to startle the hiding fish. Then you lift your dip net to find anywhere between a single astonished specimen and a dozen  of them. Despite their small size and equally small yield, dip nets are multifunctional and therefore a must-have on a fishing trip.

Species of the genus Chaetostoma, the so-called Bulldog or Rubbernose plecs, are popular fish within the trade, but they are not as easy to collect as you might be led to believe based on their year-round availability in shops. They originate from fast flowing creeks and streams in the Andes. Rocks and stones in these streams create so many hiding places and escape ‘alleys’ for these nimble fish that most nets are not usable in this kind of biotope.

If you try to catch a specific individual, you will lose it as soon as you flash your net. Instead let the biotope work for you. Look out for a stone which is big enough for fish to hide under or beneath, but also small enough to be moved by you or one of your travel companions — it pays to choose strong accomplices on these trips.  Place the dip net behind the stone, lift it up, and once the fish admits defeat and lets go, the current will carry it downriver towards you and right into your waiting net.  You can also try to collect the fish by hand if the stone is too big to be moved. This method requires a lot of experience though and you will sometimes grab into crevices or holes with unknown inhabitants. 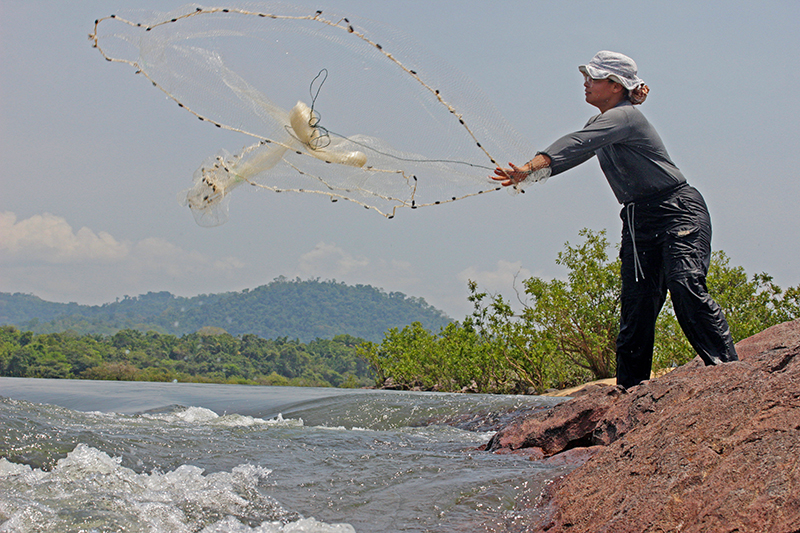 One at a time

Many Loricariids (suckermouth catfish) are collected by hand, which means that each specimen gets caught individually — that in itself should offer a clue as to why these catfish often command high prices in stores. This method is mainly employed in clearwater because the fish needs to be spotted first.

The fisherman approaches a stone or a similar hiding place and starts to scan it for the fish in question: Baryancistrus, Pseudacanthicus, Hypancistrus, Panaque and many of our other aquarium favourites are collected this way.

Once spotted he will very slowly try to get his hand diagonally behind the catfish to suddenly drop it down and grab the specimen near the pectoral fins (which can cause some pain to the handler if done wrong). Done right, this works well with smaller specimens; large ones need to  be grabbed with both hands immediately. If you have ever had a 30cm pleco in your hand, you’ll know how strong they are. Now imagine trying to hold one while underwater and finding yourself fighting against a strong current.

Most catfish collected this way are then transferred into a plastic container, to store them until the fisherman decides to end his hunt. Most fishermen I know use large soda bottles, while some prefer small canisters. A bottle of two litres easily houses 30 small plecos for a short time, and since it requires so much exertion to rise and descend through the water regularly, fisherman try to fill the bottles as efficiently as possible. 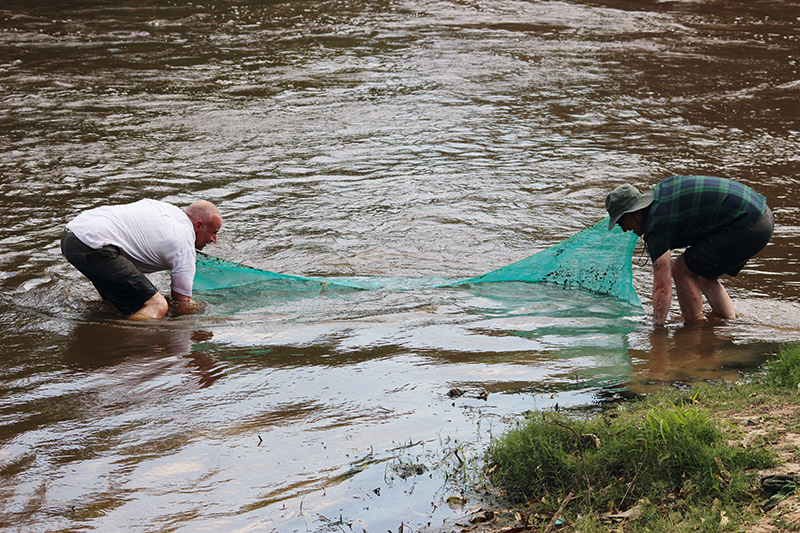 But how about the sand-dwelling, or psammophile species? By definition, they are much more difficult to find, and especially during daytime you’re unlikely to spot any fish like Pseudohemiodon, Rhadinoloricaria or Loricaria at all, as they’ll be hidden away. Come back to the same spot at night, however, and you’ll harvest them in their dozens.  There are two methods to collect them. The first method involves a large seine net which usually works out great in spacious, sandy rivers, but always comes with the risk that the net might snag on a submerged branch or tree. In the worst case scenario the net might become completely tangled and you’ll need to dive down to retrieve it.

The lower edge of the net is loaded with weights to keep it on the substrate and stop fish from slipping out underneath. Apart from sand-dwelling catfish, many large tetras, cichlids, and even rays are collected this way. Seine nets allow the fisherman to get a good cross-section of whatever fish fauna is present, and in good numbers too.

If you are after a specific species you might opt for the second method. It is a dip net again, but this time with a long handle, and instead of weight on the lower edge it comes with tines to create a device like a rake. This modified dip net is supposed to dig itself into the ground to excavate the fish buried in sand. As before it is used against the current, since fish almost always flee with the flow, eventually ending up in the net. 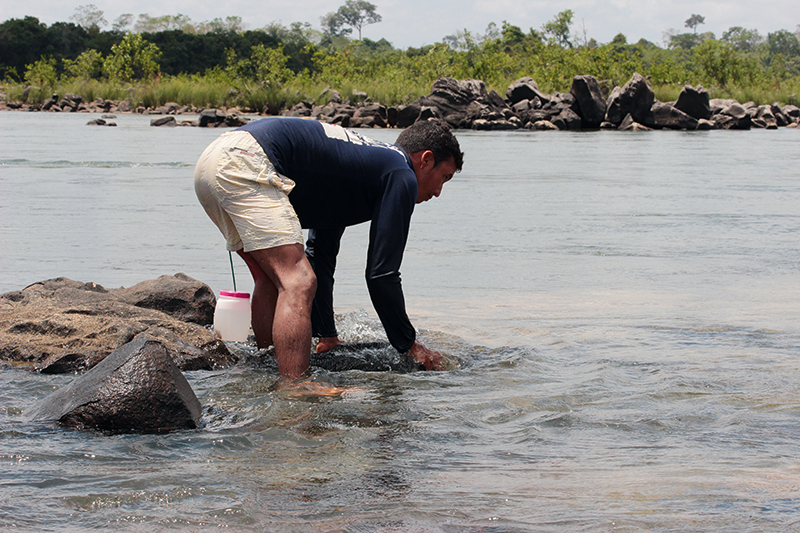 Then there is the cast net, something totally different to all methods presented so far. It is one of the most promising, but also the most challenging methods at the same time. A lot of practice is needed to master the cast net, but it will allow you to catch almost every species of fish that is not hidden under a stone or buried in the ground. It works well in both flowing and standing waters and allows the fisherman to stay a distance away.

The net is circular, and the aim is to throw it in a perfect and wide-open circle, like an old parachute. Thanks to the weights on all edges, it sinks rapidly and the bigger it is, the more fish that are caught under it. The fisherman always keeps a string connected to the net in his hands, and by pulling this the net rises from the water. The weights remain on the bottom of the catch area and if there is no branch or big stone blocking the net, there is no way to escape. Underwater the net closes as it is being pulled out, and then the contents can easily be picked out on the bank of the biotope. 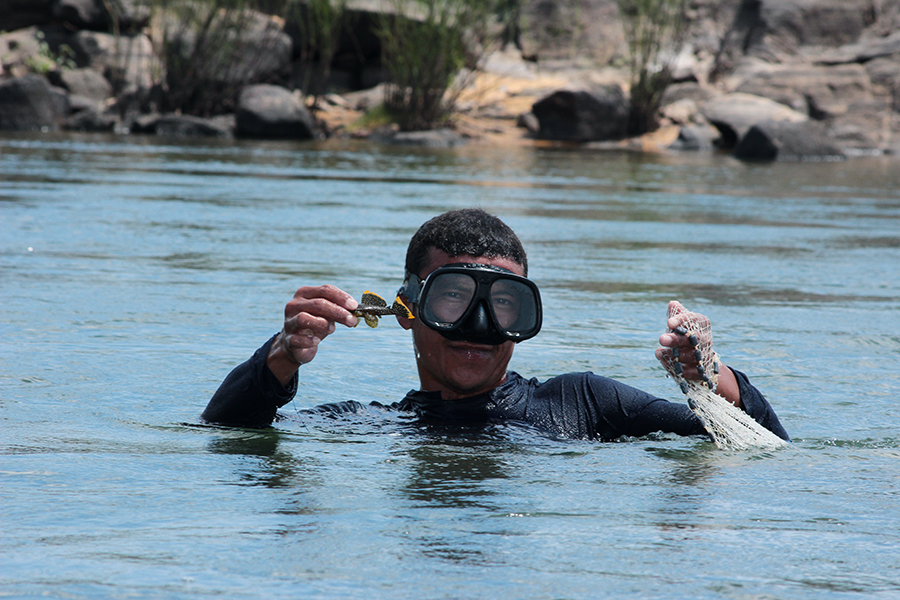 Finally, there still is the matter of time you are out to collect. I can barely control my frustration whenever I read statements like ‘We stopped for two hours and moved on after we were sure that  we had collected all present species.’ Unfortunately, I read that a lot, and it’s rarely true. I can guarantee that if you invest more than 24 hours into a single biotope, you will not regret it. Many species, for example the big pimelodids like Pseudoplatystoma do not come out before the sun has set. Many fishermen place gillnets in the late afternoon and return to them the next day to pick up what has tangled itself during the night.

Smaller specimens are then often collected to be sold on for retail purposes, while the big ones supply the local food market. We experienced this on first-hand when we were collecting in Bolivia in 2015. My pal Richard was trying awfully hard to catch a big pimelodid for hours but without success. Then, right after 5pm he caught them --— one straight after the other. A third companion, Steve, and I were delighted that he succeeded, because that also oversaw our dinner.

What you read here is based on my collecting experiences and far from a complete insight into the art of collecting freshwater fishes. But I hope it gives you an idea of the complexity of the business and of what some of your fish at home have already been through.