Hermit crabs: You've got to love them! Hermit crabs can look incredibly bizarre and have bright coloration, fascinating behaviour and endearing personality. And there's a hermit for most marine systems â€” although you need to be careful when choosing which species. Dave Wolfenden explains...

Hermit crabs are not strictly crabs. They’re anomurans and differ from ‘true’ crabs in their specialised morphology. Due to having a soft abdomen, they are notorious for utilising mollusc shells, as well as pieces of coral skeleton and even pieces of litter such as bottle tops when the opportunity arises.

Most species exploit gastropod (snail) shells and, as a result, hermits exhibit a torsion, or twisting, of their abdomen, along with a 'handedness' in most species — with the left chela, or claw, being larger than the right. 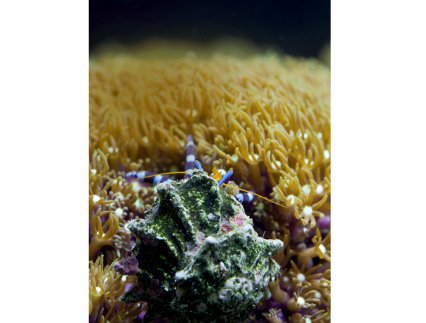 Feeding habits and temperament varies tremendously. Some are tiny and make excellent cleaner crew in reef aquaria. Others may be big bruisers, capable of catching fish and wreaking havoc with anything but the largest tank mates.

Always provide spare shells for them to grow in to and the bonus is being able to watch the associated behaviours. The crab will meticulously inspect the interior of any potential new residence before — if all seems right — moving in smartish! 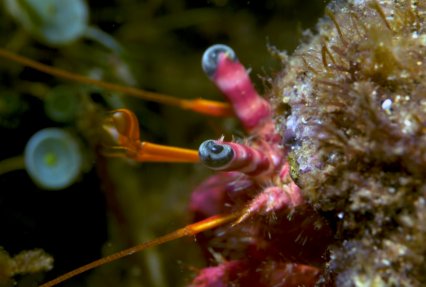 Several species are great cleaners, consuming nuisance algae and leftovers as well as turning over the top layer of the substrate. 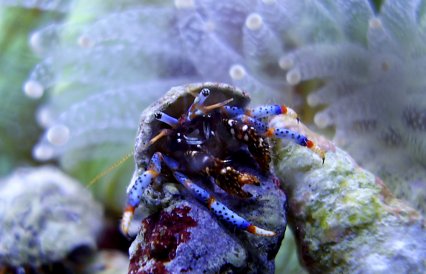 Among the best for the smaller reef are the Blue-legged hermit (Clibanarius tricolor) which grows to 2cm/0.8” across and the Red-legged hermit (Paguristes cadenati) which reaches to 3cm/1.2” and both originate from the Caribbean.

However, there are provisos. Never crowd too many into the aquarium and aim for just one hermit per 50 l/11 gal of water to avoid over-competition and aggression between individuals.

Another issue with overstocking is that they will tend to become more destructive as population density increases — presumably as food supply becomes limited.

While these two species will happily scavenge under light stocking conditions, as well as consuming hair algae and even cyanobacterial films, they will resort to consuming both sessile and some mobile invertebrates if hungry. At particular risk are molluscs, such as topshells and Turbo snails. 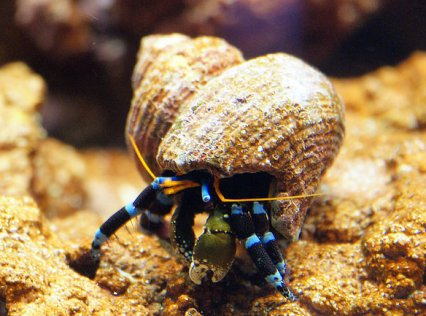 The Blue-knuckled hermit (Calcinus elegans) — pictured above by Haplochromis, Creative Commons — is often used as a reef cleaner and although it can be a grazer of problem algae this species can be hit-or-miss. From the Pacific, this hermit grows to 5cm/2” across and is identified by electric blue stripes on its dark legs.

It will often damage delicate sessile invertebrates by clumsily wandering over them and it will become aggressive if overcrowded with conspecifics. It may also consume grazing gastropods, so supplement the feed regularly to minimise any likelihood.

The Dwarf zebra hermit (C. laevimanus) owes its name to the black and white stripes adorning its legs. Growing to around 4cm/1.6”, this Pacific species also sports blue eyes and orange antennae, so is quite a looker. This species is a good grazer as well as being a useful scavenger. 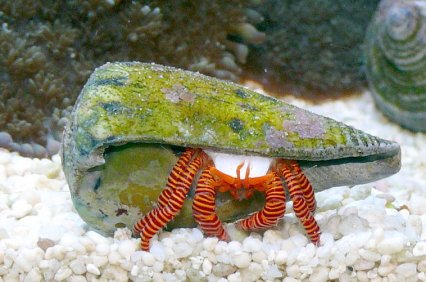 It grows to around 5cm/2” and makes its home in the shells of venomous cone snails. It is also expensive, but well worth the money if you can get hold of one and can meets its needs.

Halloweens can be risky propositions for the reef aquarium and best kept in a system without delicate fish and invertebrates. Having said that, this predominantly nocturnal species can perform useful scavenging duties. Supplement diet regularly if there are insufficient quantities of scraps and leftovers for it. 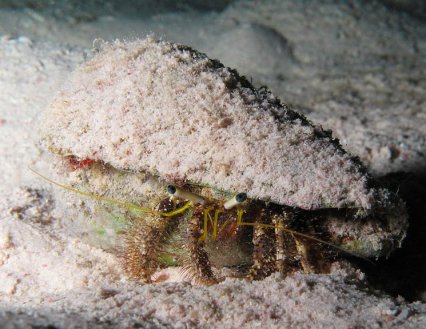 Members of the Dardanus genus frequently crop up and the distinctive D. lagopodes or Blade-eyed hermit — pictured above by Alexander Vasenin, Creative Commons — from the Indo-Pacific grows to 6cm/2/4”. Its common name is inspired by prominent white eyestalks. The antennae are blue and legs a mottled white and orange, making this overall a pretty good looker.

While it is a useful scavenger it can be downright clumsy, which limits suitability for the reef aquarium. Many invertebrates don’t appreciate being lumbered over by this ungainly crab, but in the fish only or FOWLR system it can prove very useful. 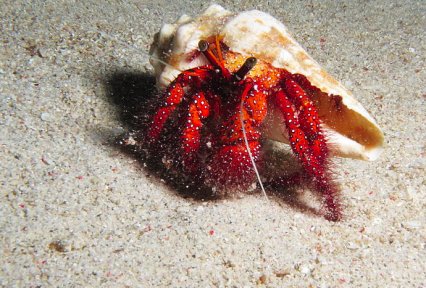 The White-spotted hermit (D. megistos) — pictured by Alexander Vasenin, Creative Commons — grows to 10cm/4” and comes from the Indo-Pacific. This species is orange with white spots and hairy legs. It’s an aggressive scavenger and risky for reef aquaria. If opting to keep this hermit, feed regularly as they consume a surprising amount of food. 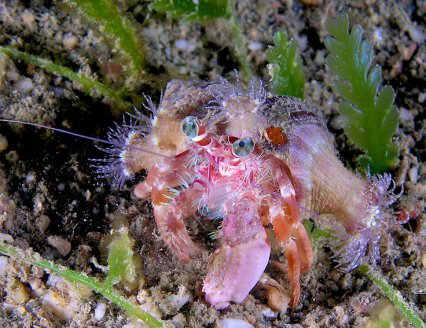 One of the most interesting species is the Anemone hermit (D. pedunculatus) — pictured here by Nick Hobgood, Creative Commons — from the Indo-Pacific. Growing to 6cm/2.4” this hermit has devised a clever strategy to protect itself from attack by octopus predators — recruiting anemones, with which it adorns its shell.

So reliant is the hermit on its cnidarian ‘bodyguards’ that it removes them from the old shell during house moving and relocates them on to the new one!

This appears a mutualistic relationship, both crab and anemone benefitting from this association. The crab manages to deter cephalopod predators, and the anemone hitches a ride with a very messy eater. The clouds of scraps generated by the hermit at mealtimes mean guaranteed food for the anemone.

The hermit has prominent spines on its legs and while smaller specimens can be beneficial scavengers on the reef, larger individuals can be extremely destructive, consuming a wide variety of invertebrates.

The Tiger hermit from the Indo-Pacific is one for the species system or aggressive fish-only aquarium.

It’s a true beast, displaying bright orange coloration and extremely hairy legs. Clocking in at 10cm/4”, this is a very aggressive species which will feast on any invertebrate it can get its claws on. This hermit is even capable of catching small unwary fish! 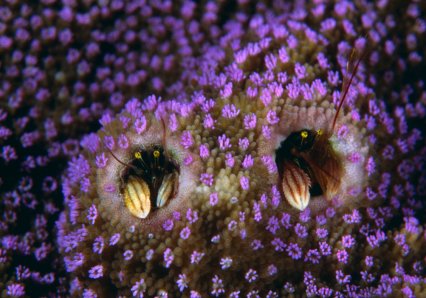 Hermit amongst the corals

There are those hermits that have totally done away with carrying a home and have taken a more permanent residence.

These sessile hermit crabs don’t scavenge about, but instead have adopted a filter feeding approach, using adapted antennae to sift tiny pieces of plankton and other particles.

They are frequently available for sale in Plume rocks. 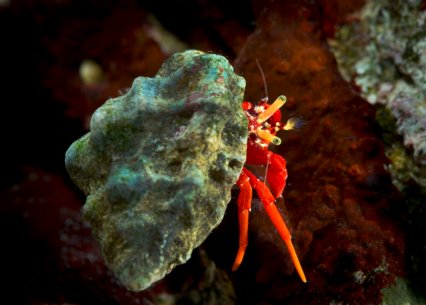 War on the home front

If housed with conspecifics, some hermit species will fight over shells. As they grow they need to 'move house' to larger quarters and this can be a source of aggression between individuals.

If one individual has coveted another’s shell as a suitable ‘des res’ then it may rap its current shell on that of its rival. While the victim retreats in response, it may eventually become evicted if the aggressor can maintain an attack of sufficient intensity and duration.

However, if the aggressor is unable to maintain any momentum in its attack it will eventually give up.

A rock and a hard place

Not all hermits inhabit gastropod shells and some have exploited other forms of protection when molluscan real estate is in short supply.

Take the Sandstone hermits (Cancellus spp.) of Australia. These bore a hole into chunks of sandstone which occur in their native waters and once a large enough opening in which to place its body has been created the crab uses that hunk instead of a shell.