Habitat: Fast-flowing creek full of driftwood and with sandy bottom. Overhanging trees along the edges were making the biotope dark even during daytime. It was a blackwater site with no aquatic vegetation.

Notes: Several species are similar, including M. dichroura, M. lepidura, M. icae, M. gracilima and Hemigrammus marginatus — one the type as in Eigenmann and from Lago Castanha, Brazil, but both forms are scale-less on the caudal fin while Moenkhausia species have scales. M. intermedia can be identified by a large pre-caudal-, often angular, spot which extents into the end of the caudal fin. It also has an amazing distribution in the Amazon, Orinoco, La Plata, Approuague, Maroni and Mana river basins.

Aquarium: This species is perfect for a planted community aquarium with sandy bottom. It should have a slowly flowing filter, driftwood and shade with floating plants like Azolla, Salvinia and Lemna species.

This species should be kept in groups of at least three to five and as tank mates I suggest other Moenkhausia and Nannostomus or Carnegiella and Hyphessobrycon species, Corydoras and Rineloricaria as well as dwarf cichlids (Apistogramma and Dicrossus) and possibly larger ones like Heros and Mesonauta. 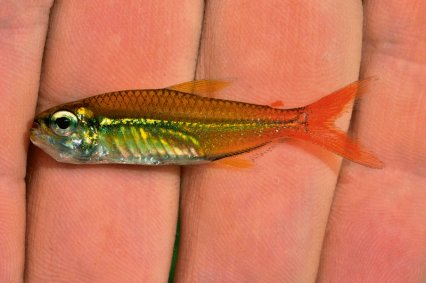 Habitat: Flowing river with a rocky and sandy bottom, with fallen-in trees and along the edges overhanging grasses creating all-day shade. Black water and no aquatic vegetation, but there were many tree roots, Philodendron and other terrestrial plant roots.

Notes: There are several similar species, like M. copei, and both were described by Steindachner in 1882 from Óbidos,  Amazonas, Brazil.

M. collettii has an amazing distribution in Amazon and Orinoco river basins and is found throughout the Guyanas and south to the Paraná-Paraguay river basins.

Aquarium: This beautiful species is perfect for any community aquarium with a sandy bottom and floating plants with long roots. It should have a slowly flowing filter.

The fish may breed within roots of floating plants or Philodendron roots growing in. 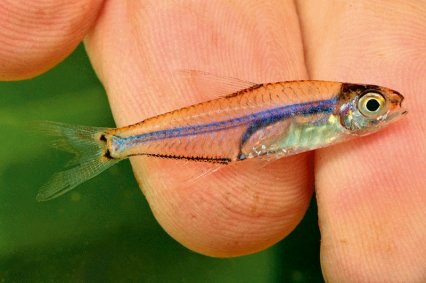 Habitat: Clear slow-flowing bay of the river with sandy bottom and in bright sunlight. No vegetation, but some tree roots.

Notes: Seven species are in the genus Microschemobrcon, Böhlke, 1953, and they are tetras hardly 2.5cm/ 1” TL.

One, Hemigrammus geisleri, Zarske and Géry 2007, was described twice, as it is the same fish as Microshemobrycon geisleri, Géry, 1973 – both described from the same type locality near Óbidos Igarapé, Pará, Brazil.

I collected several times here and confirm it’s the same fish. The species is probably new and has a neon-like stripe from gill plate to caudal peduncle.

Aquarium: This species is a beauty for smaller aquaria and perfect for small community aquariums with small mates.

Décor should consist of sand, leaves and driftwood, and a filter should provide no turbulence. 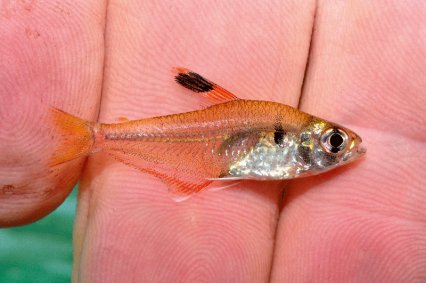 Habitat: Fast flowing creek full of driftwood and a sandy bottom. Overhanging trees made the biotope dark. Blackwater with no aquatic vegetation, but this species lived along the edges below leaves and driftwood.

This is a much more colourful species and H. copelandi has its type locality in the Igarapé Belém, 150 km/93 miles east of this location.

Aquarium: This fish is also perfect for a planted community aquarium. It should be kept in groups of at least four to six specimens and have a slowly flowing filter, some driftwood and leaves on the bottom.

As tank mates I suggest other Hyphessobrycon, Nannostomus, Characidium and Carnegiella, and Corydoras arcuatus and Rineloricaria species, as well as dwarf cichlids like Apistogramma bitaeniata and Aequidens species.