Heiko Bleher reveals some new South American species of miniature fishes - some of which are now in the hobby.

Elachocharax sp. 1 (pictured above)
Origin: Caño Tonnino, La Pedrera, Colombia.
Water: pH 5.45, conductivity 20.
Habitat: Flowing creek with sandy bottom covered by leaves, driftwood, fallen-in trees, and along the edges by overhanging grasses, so shady most of the day. Black water and no aquatic vegetation, but many tree roots, Philodendron and other terrestrial plant roots.

I had already found Elachocharax species in many parts of the Amazon and Orinoco basin and I’m sure, especially because they are so tiny, several species are undescribed.

Aquarium: This beautiful species is perfect for a nano aquarium with sandy bottom, a few floating plants with long roots, driftwood and leaves on the bottom. It should have a slowly flowing filter, as these fish are used to still water.

They may breed within roots of floating plants or Philodendron roots growing into the aquarium.

As mates I suggest only small fishes like Nannostomus, Carnegiella, Hyphessobrycon amandae and Corydoras pygmaeus. 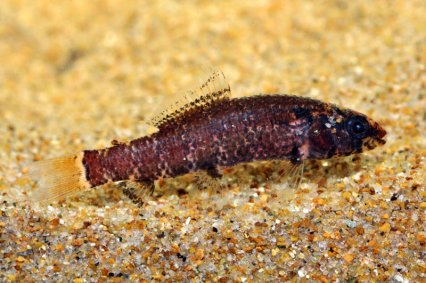 This species also has an illuminating green gill spot and the adult shown was .91cm/0.36” SL.

Aquarium: This is also perfect for a nano if set up with a sandy bottom, floating plants with long roots, driftwood and leaves on the bottom. It should have a slowly flowing filter, as the fishes are used to still water.
They may breed within roots of floating plants or Philodendron roots growing into the aquarium. They also need the roots to live under, which is their habitat. Mates are similar as for other Elachocharax species. 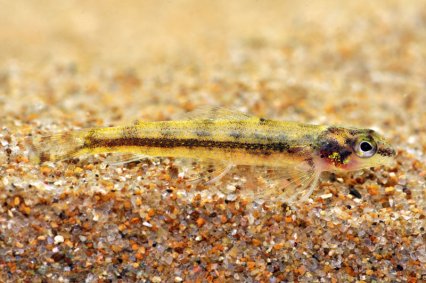 Notes: Nine species described in Melanocharacidium, Buckup, 1993, mostly species formerly in the genus Characidium. Bottom-dwelling characids without or reduced swimbladders and a large distribution pattern in South America, east of the Andes.

There’s a possibility this species is new and may not even belong to Melanocharacidium.

Aquarium: This species, which camouflages itself to its sand, is another candidate for a nano with sandy bottom, few plants and pieces of driftwood. It should have a slowly flowing filter and no turbulence. They may breed over sandy ground, which is their habitat.

Mates should be similar to the Elachocharax species, but also live with Apistogramma and Biotodoma species, as well as young Geophagus. 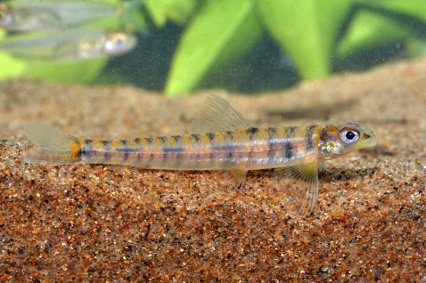 Notes: There are 53 species described in the genus Characidium, Reinhardt, 1867, and they belong, as the other miniatures on these pages, to the subfamily Characidiinae (formerly Characidiiae.

This species live without a swimbladder and other members and species of this genus are found in tropical and sub-tropical regions from Panama to the La Plata region and northern Argentina. All are ideal bottom dwelling aquarium fishes with beautiful, unique behaviour. None are large, most being less then 5cm/2” TL. The example pictured is an adult at 4.2cm/1.7” SL.

Aquarium: This species, which also adapts to the colour of its sand, has bright yellow spots, and its head is always upturned like a salamander. It’s perfect for small community aquariums with small mates. Apistogramma and Biotodoma species are also good companions.

Décor should consist of sand and some driftwood. It should have a slowly flowing filter with no turbulence.

They may breed only over sandy ground, preferably between rocks.