Heiko Bleher finds an amazing variety of characoid species during a recent trip to Brazil to research the Rio PuritÃ¨.

Habitat: Leaves, driftwood, fallen-in trees along the edge, also overhanging jungle trees offering shade most of the day. The black water had only some Eichhornia crassipes and Pistia stratiotes floating plants.

Notes: Many often so called ‘Rosy tetra’ species are described, but there’s still a lot missing and the latest revision was not helpful as the specimens were not collected at their type locality, like H. copelandi.

Aquarium: This probably new species will be especially good over a sandy bottom, with many leaves and possibly some plants and driftwood. Any tank should have a slowly flowing filter, as these fish are used to still water. They also breed easily in small groups. 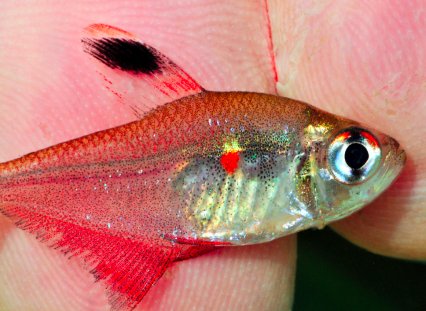 Origin: As for Hyphessobrycon aff. copelandi

Habitat: I found this fish swimming among seemingly millions of leaves, driftwood and fallen-in trees, littering the entire edge of this lake. Other details as for Hyphessobrycon aff. copelandi

Notes: H. erythrostigma, which is commonly known as Bleeding heart tetra, is found in the upper Amazon river basin, Brazil, Colombia and Peru, but this variant from the Rio Purité has a much brighter (reddish) colour and above its ‘bleeding-heart’ spot there’s a large golden spot.

Aquarium: This species should, as with H. copelandi and other Rosy tetra species, always be kept in groups of never less than five. Provide a sandy bottom for them, with leaves and possibly some plants. I recommend sword plants and driftwood. Have a slowly flowing filter as these fish are used to still water. They also breed quite easily in small groups. 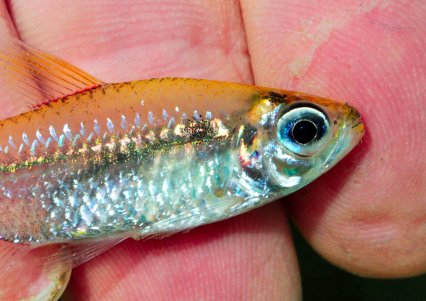 Habitat: This brightly-coloured Moenkhausia is from a nameless shallow creek covered with many leaves over mud and sand. Fallen trees were everywhere, but there was no aquatic vegetation, apart from Cyperus near its mouth.

Notes: Several undescribed Moenkhausia species have already been introduced widely in the hobby, often as M. collettii which has a large Amazon and Orinoco basin distribution.

Aquarium: This species needs a slow flow. If wanting mates I suggest only small characoids, like Nannostomus species or bottom- dwellers like Characidium and/or dwarf cichlids. Corydoras and Otocinclus species can be added. Beige or white sand and many leaves are also important. 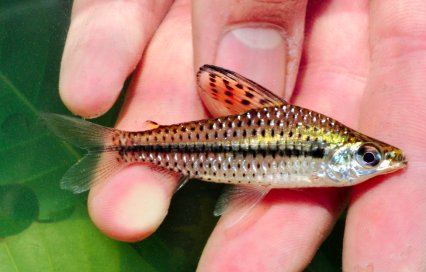 Origin: From the same slow-flowing creek entering the Rio Purité as Moenkhausia sp. 1.

Water: The same readings as for Moenkhausia sp. 1. and taken at the same time.

Habitat: I found this in the same tiny creek as Moenkhausia sp. 1. The ground was partly muddy and mixed with sand.

Notes: C. punctatus is also known as the Spotted headstander and it has a very large South American distribution. However, this variant that I discovered in the the Purité-system has a very briught golden stripe in the dorsal area.

Aquarium: This species needs flow in the aquarium and as for tank mates I suggest the same as for Moenkhausia sp. 1. Again add beige or white sand on the bottom with many leaves.