It’s said that aquariums are good for you, but is there any rational basis to this claim? New contributor Heather Walford investigates.

Would you believe me if I told you that keeping an aquarium in your home or office can really improve the quality of your health? You may be surprised to hear just how many mental and physical benefits there are from keeping fish.

To begin with, and as any aquarist will already know, fishkeeping provides a mental workout as owners must grapple with maths, physics, chemistry, and biology to keep their fish alive — and all of this happens before you even decide which species of fish you are going
to have. 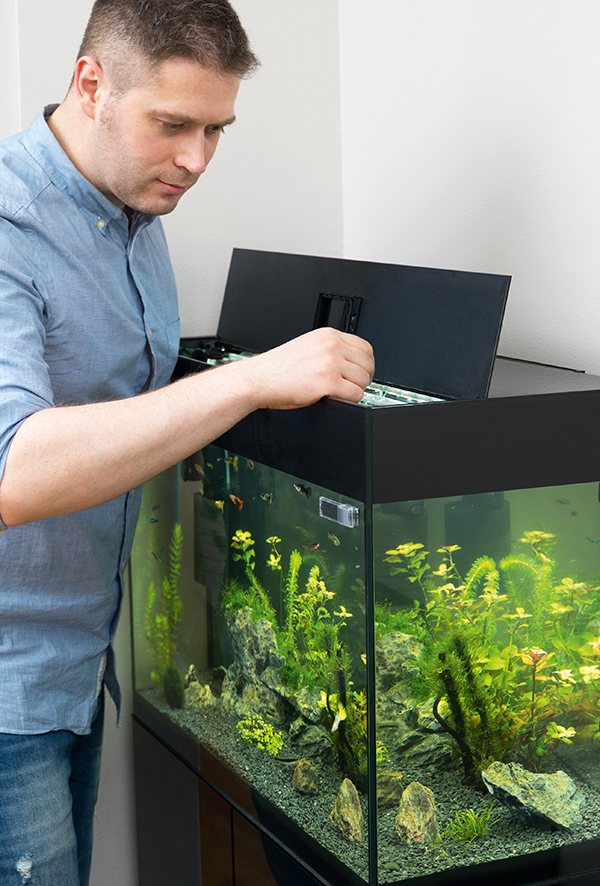 The positive physiological and psychological effects of fish tanks have been the subject of several studies. One of the more recent ones was published in the journal Environment and Behaviour, and was a joint study carried out by experts from the National Marine Aquarium, Plymouth University and the University of Exeter. The stimulus? Observing fish swimming in a large aquarium. The outcome? It turns out that it can lower a person’s blood pressure.

Directly linked to this, it was found that the act of observing fish in aquaria also helps to decrease a person’s heart rate. Imagine that —spending time watching an aquarium reduces two physical symptoms commonly associated with stress. Who would have thought?

As an interesting feature of the study, the researchers noted that as the numbers of fish in the aquarium increased, peoples’ attentions were held for longer and their moods improved — at least, that’s what the participants reported.

But then I’ve no doubt that many people in the hobby will already know this. Staring into an aquarium is relaxing, and for the fishkeeper there’s little better than coming in from a hard day at work and getting lost in your own underwater world.

After all, it’s well known that the presence of nature and sound of water in your surroundings can have a dramatic effect on stress levels. Did you know, for example, that humans naturally have an attraction to water? Besides which, we are literally made out of it (60% of our bodies and a colossal 90% of our blood is water) and it is hardwired within our DNA. Do not be afraid to make your aquarium the centrepiece of the room for this reason.

It’s common knowledge that many dentist’s and doctor’s surgeries have aquariums in their waiting rooms, especially across in the USA. Older studies dating back to the 1980s have shown that when aquariums are placed in these waiting rooms, patient anxiety levels are reduced, and they are more relaxed in the run up to surgical procedures. With an aquarium present, it has been recorded that patient anxiety levels have been reduced by up to 12%.

Research has indicated that some individual aquarists consider their fish to be a source of companionship and feel an emotional bond or connection with them.

It doesn’t take much imagination to see how this could be true; we’ll all be familiar with fish that are intelligent, curious, interactive and have personalities, much as any ‘higher’ pet like a cat or a dog. Point in case, Oscars, Astronotus ocellatus, are often known by American aquarists as ‘water dogs’ due to their engaging, inquisitive nature.

The same applies to other species of cichlids as well as the likes of fancy goldfish, puffers, or even particularly personable catfish.

Many folks assume that you need to own a dog or a cat to feel the benefits of companionship. However, owning fish could carry the same — if not more — health benefits than keeping other types of pets. Two investigations (conducted by the National Centre for Biotechnology Information) involved individuals who currently kept fish as companion animals, in order to better understand their experiences.

One was a phenomenological study; it explored experiences of pet fish ownership through in-depth interviews, while the other study utilised a survey design to investigate the qualitative aspects of keeping home aquaria. Both studies identified relaxation and stress reduction as potential benefits of keeping fish as companion animals

This appeared to be primarily associated with watching the movements of the fish, although the sound of running water was also mentioned. Alas, relying on the methodology of these studies is risky at best (as all self-reporting studies can be) but they do seem to reinforce something we aquarists will be anecdotally familiar with — our fish do seem to relax us. 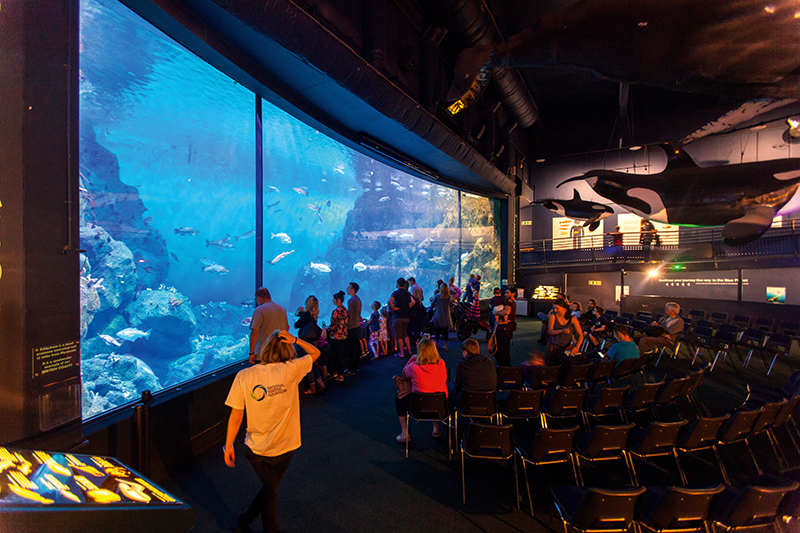 Dulling the senses, increasing the appetite

More recently, tentative research has linked the watching of fish in aquaria to outcomes such as increased tolerance to pain, as well as improvements in nutritional intake and body weight among residents of specialised dementia units.

Taking the latter of those points first, weight loss is a serious risk factor for people suffering from Alzheimer’s disease, so two studies examined whether or not the addition of aquaria into the dining areas of care facilities could have any effect. Specifically, the researchers were looking to see if the presence of fish could positively influence a dementia patient’s nutritional intake, and subsequently improve their body mass.

Such a study is easy to carry out — you measure the amount of food being consumed per meal and the patient’s weight, and see if there’s any change once a fish tank is added into the equation.

In both studies, food consumption was found to significantly increase in the period following an aquarium’s installation, and body mass significantly increased for many months thereafter. The study may have only drawn on a relatively small sample, and it may be risky to extrapolate too much from it, but these early indications are at least promising.

Other studies suggest it isn’t just eating habits in Alzheimer’s patients that are affected by fish. The use of brightly coloured fish in care facilities have been shown to not only reduce everyday disruptive behaviour, but even to reduce physical aggression.

Oh, and it’s not just adult behaviour that can be altered by the presence of fish. Over at the University of Pennsylvania, researchers have found that fish-filled aquariums have their uses in calming disruptive disorder behaviours in children, too.

The testing method was straightforward — 69 participants were sat down in front of an aquarium and gripped an electrical stimulation device between their fingers (I’m sure that you can see where this is going). From there, a charge was sent through the device, gradually increasing to a point where the participants indicated that they felt pain.

Throughout 30 minutes of watching fish and being slowly zapped, the pain thresholds for participants were recorded, and turned out to be significantly higher than they were when compared to non-fishy readings (when being zapped and not looking at a tank).

Interestingly, the influence of the fish had a lingering effect. Even some ten minutes after viewing the fish, the pain threshold remained high in the fish-watching study group. 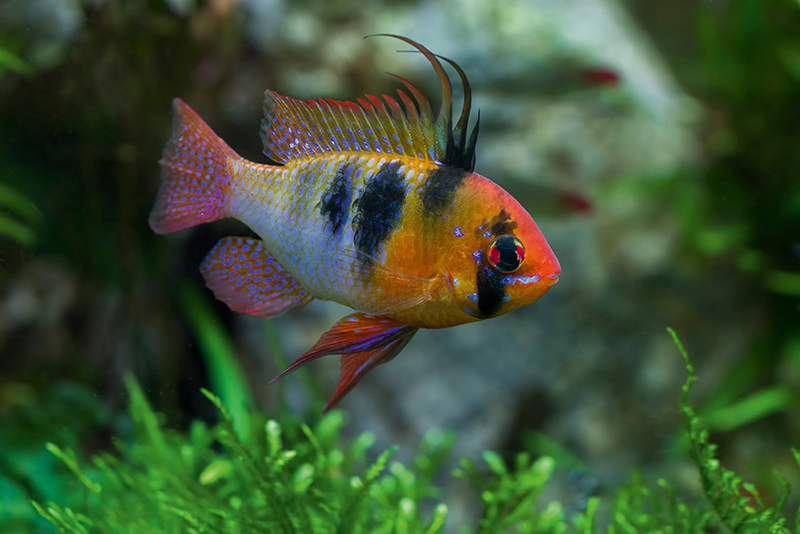 I’ve often considered that another bonus of fishkeeping is that it gives people a sense of responsibility, with the task of remaining focused. To successfully look after our fish and keep our aquariums looking neat and presentable, we also need to look after ourselves, and I speak from a position of lived experience when I express just how much fishkeeping can help someone suffering from mental health problems. It has helped me lots.

I have always found it gives me a sense of purpose to care for my fish, and aquarium maintenance is always a pleasure and never a chore. At times, it can be a great distraction. Making sure that you are being productive is proven to be good for your mental health and some people may find fishkeeping helpful for this reason alone. 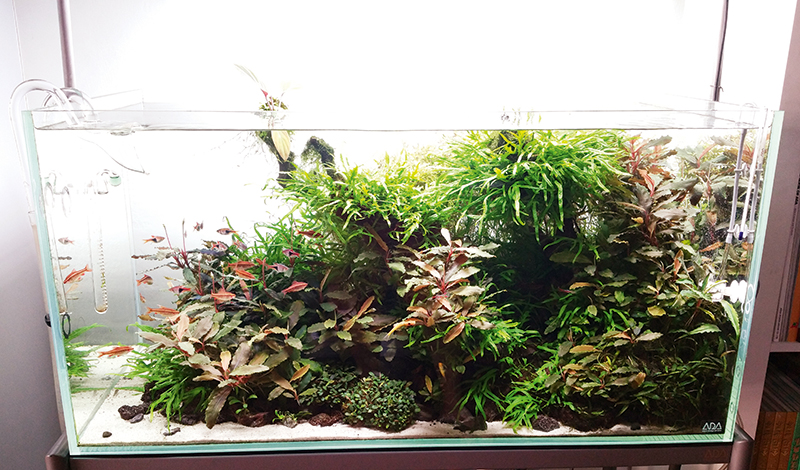 Proximity to nature is a feel good factor.

The science is still at its fledgling stage, and needs considerably deeper investigation at the bodily and neurological levels, but since the 1990s the term ‘aquarium therapy’ has been making some headway as an unofficial form of treatment within what are broadly known as ‘animal assisted therapies’. Grooming of rabbits and guinea pigs, training dogs or caring for farm animals are all examples of animal assisted therapies, and may be introduced in a range of environments such as nursing homes and rehabilitation facilities.

The catch, of course, is that in the case of fish we really don’t know the mechanisms by which livestock and aquaria assist mental health. It could be something simple — perhaps we enter a soporific state when watching fish (as we might do when watching burning logs in a fireplace), and that might be enough to alleviate our conscious worries. Perhaps, as some researchers suspect, there’s an element of ‘nature immersion’ involved (humans tend to be more relaxed in natural settings than manufactured ones), which would certainly explain the rise of aquascaping and the green ‘natural’ look that it brings indoors. Perhaps it’s even something to do with the novelty of seeing
the underwater world first-hand — something we never physically evolved to do.

Interestingly, with all of the research so far, the emphasis is on fish being the beneficial influence — lots of fish and lots of variety. Water in tanks alone show little positive effect, but once the livestock is added, that’s when the good stuff occurs.

With that in mind, what better reason do you need to get another tank? It’s good for you, after all… 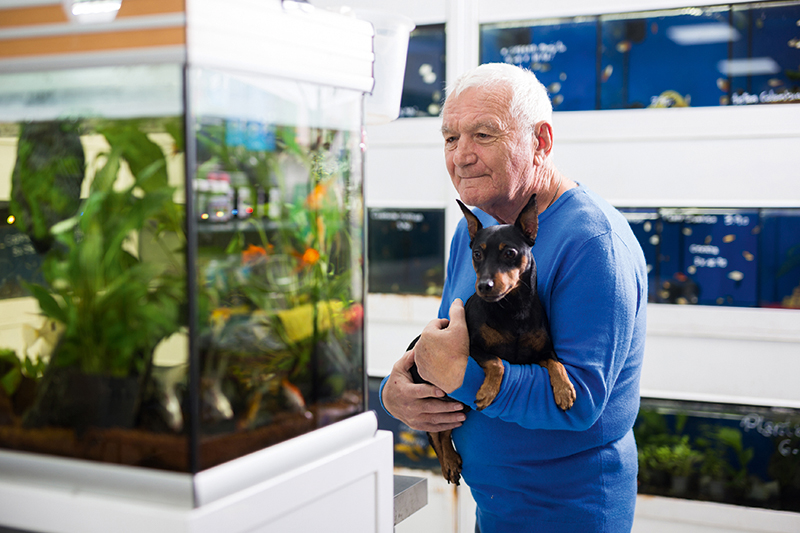 Fish can be a great distraction.

Getting the most from aquaria

According to proponents of aquarium therapy, there are three factors to making the most of aquarium viewing, applicable to both home and public aquaria.

Firstly, it pays not to rush. In many of the studies on fish and relaxation, there’s a strong correlation between the time spent watching fish and how at peace a person becomes. Linger with your tank and give it time to kick in.

Secondly, it appears that in study samples at least, colourful fish are more stimulating than cryptic ones (which makes sense if it’s the observation of fish that is key to relaxation). While you’ll know your own preferences better than anyone else, you might be better off chilling out with a tank of bright Ram cichlids or garish gouramis than a Humbug catfish hidden in a log.

Lastly, try to ensure peaceful surroundings. If visiting a public aquarium, find out what their off-peak times are. At home, try switching the phone off and forget that social media exists for a few hours.