Erwin Schraml discovers an exciting new cichlid with a rather unfortunate scientific name.

Scientific name: Haplochromis aeneocolor
Origin: Lakes George and Edward, and intersecting Kazinga channel, in Uganda.
Size: In nature males can reach 10cm/4” SL.
Diet: Predominantly this is a detritus feeder, as stomach content analysis revealed mainly plant remains and insect larvae. However, some adult insects are also eaten. Like almost all haplochromines, this species can be fed all kinds of artificial and frozen fish food in your tank.

Water parameters: Temperature should be between 24-28°C/75-82°F, pH between 7.5 and 8.5, and hardness around 10° GH, but this fish tolerates up to 30°C.
Aquarium: Several males can be kept in the same aquarium, as long as territories provided are large enough. Tank size should be at least 90 l/20 gal.

Notes: H. aeneocolor is a moderately aggressive species and, depending on stress factors, females brood for two to three weeks and can carry 40 or more fry in their mouths. 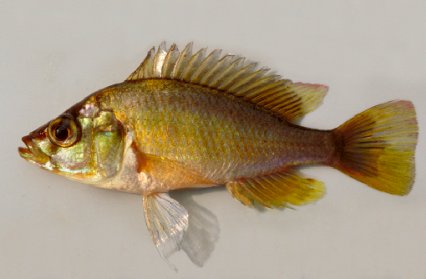 Peter Greenwood described this species in 1973 and aeneocolor is a combination of the Latin words aeneus and color, which not only means bronze coloured, but is also a double entendre term to describe the brassy appearance of some "easy" women!

However, males show up almost any spectral colour and will appear in different morphs. Besides most frequent brassy coloured specimens, there’s also a dusky blackish and a bluish morph in existence.

In 1980 Greenwood placed this species in Astatotilapia, but this genus is ill defined and it would be better not to use it before a better definition is available.

Price: £10-15 depending on size.
Availability: All good fish shops.