Some stores regard them as mere tank fillers, yet bands of livebearer enthusiasts think they're the world's best fish. Nathan Hill investigates why Swordtails don't always seem to cut itâ€¦

Swordtails have been a hobby staple for many decades and 1950s textbooks recommended them as hardy and colourful additions to a community tank. On the whole that definition remains a valid one.

To our shame, many aquarists see these as the ‘also ran’ specimen and not worthy of singular attention. The fish is too often viewed as for beginners only — and something the old salts are way above.

However, there have been resurgences, with infatuated hobbyists seeking out examples of some of the lesser-seen species, which, in turn, make for excellent breeding and biotope projects.

Seen most often is Xiphophorus helleri, or the Green swordtail. That said, most variants commonly imported nowadays are far from green, as mass farming efforts are producing every colour under the sun, as well as a myriad fin variations. 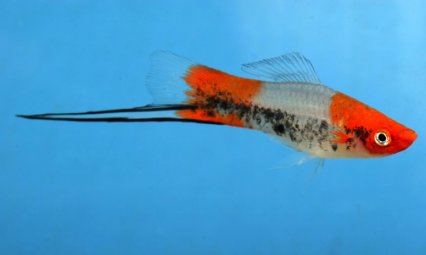 Strains like the Tuxedo, Koi, Lyretail, Black, Hi-fin and Neon swordtail are now commonplace, but all are derived from those original green individuals.

These varieties may be bold and bright, but can also harbour long-held genetic difficulties, courtesy of inbreeding.

Many new aquarists cite problems in keeping them, reporting vulnerability to whitespot, emaciated appearances and everything else you’d expect from a shaky bloodline.

Some retailers also now consider them a less than safe bet as a hardy first livebearer.

The obvious feature of any Swordtail is the pronounced, sword-like extension of the lower half of the tail (caudal) fin. Its purpose is simply to make the male look larger to a female and attract a mate.

Why bother with the arduous task of gaining body mass when a simple extension creates the same effect? 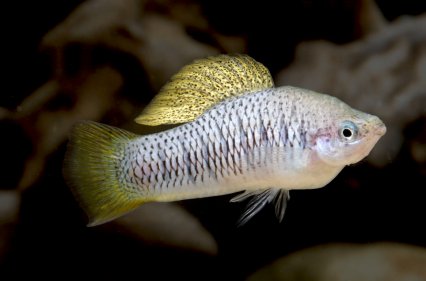 Almost all males have a sword-like appendage, although size can vary from species to species and even colour variants. X. birchmanni (pictured above) has a tiny vestigial sword, while X. montezumae has a veritable cutlass.

Babies don’t carry a sword, nor do they have the gonopodium associated with males. For the latter, development occurs first, varying between six and twelve weeks, but with some exceptions. The swords generally don’t begin to emerge until the fish reaches adulthood, sometimes after eight months or so.

Some keepers report their fish developing swords at 5-7cm/2-2.8”, but this is unusual. Quality swords will wait until ready to breed before dedicating themselves to tail growth.

Contrary to popular belief, a large sword causes no hindrance in swimming, although the same cannot be always said of extreme, tank-bred variants. Wild fish with huge appendages perform no worse than sword-less similar-sized fish, suggesting that they compensate with, or compromise, a morphological feature elsewhere. 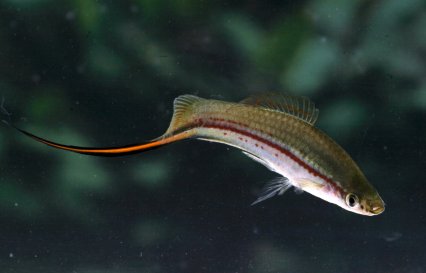 Swords in the wild

Swordtails inhabit a range across Central and lower Northern America, including Guatemala, Honduras and Mexico, although they have contaminated waterways worldwide, mainly through the actions of irresponsible or careless aquarists.

In Africa they are a real problem and impact on local ecologies. Likewise, it’s not uncommon to find them in paddies, streams and ponds in parts of Asia. They have even been reported as surviving in UK waters.

Their habitat is startlingly easy to replicate in the aquarium, and I’m amazed that more people have not embarked on Swordtails as a biotope project.

Xiphophorus helleri adore fast flowing streams and rivers. However, these fish will also populate pools, canals, and even warm springs. In fact, this is a good way to tell apart a sword from that other Xiphophorus resident, the Platy. While the former has a penchant for moving water, the latter opts for more tranquil bodies.

They have a fondness for some vegetation, on which they often graze, but that doesn’t mean they need a densely planted tank. Given greenery they will put it to use, especially fry when evading parents’ mouths, and a small handful will suffice.

They are rarely found in woody areas, or those with high densities of leaf litter. The preference is for clearer substrates, rocky, sandy and light, although sometimes with mulm and debris — as long as it can settle in fast flowing waters.

Avoid wood when laying out a tank, opting instead for rocky hardscape. Wood can release humic and tannic acids which will lower pH values and these neutral to alkaline fish won’t appreciate that. 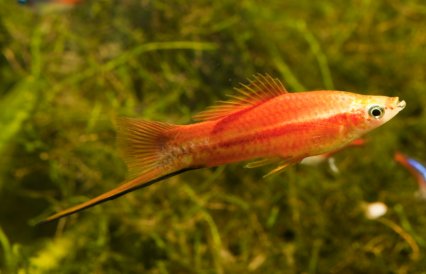 Create a flow for them. In an ideal world, a laminate flow created by a river weir system would be used, but swords will appreciate even a couple of Koralia-style circulation pumps.

Feeding swords is easy, as practically anything is accepted.

Opt for lots of insect foods, if your wallet allows, and don’t scrimp on greenery. Courgette to nibble on is relished, as are dandelion leaves. Offer dried flies, frozen bloodworm and Daphnia, and even some Calanus if you want to keep colours intense. Even without all of these, a quality flake food will keep them in fine fettle.

A lot is said about adding salt to the water and many note reduced disease occurrence when using it. However, this is not essential.

Swordtails have a remarkably high saline tolerance, able to withstand up to 60% the strength of seawater for a short while, but ultimately the decision to add will be the keeper’s alone.

Just bear in mind that if using salt real plants are not an option and other tank mates may need to be rehomed. A low dosage of some 3g per litre is usually ample.

Left to their own devices, these fish will reproduce frequently. The challenge is actually in keeping track of the parents and recording the strains to avoid inbreeding further down the line.

Fry can be separated from adults with breeding traps, but, given how prolific these fish are, the aquarist may soon be inundated. Expect swords at their peak to produce a fresh batch of offspring some 26 to 30 days after breeding — and each spawning may result in a good 20 to 80 fry, with 30 being common.

Most keepers prefer to let nature take its course, with fry taking their chances in the main tank. Even this way, you’ll find that so many young reach adulthood that you’ll need to offload some youngsters. 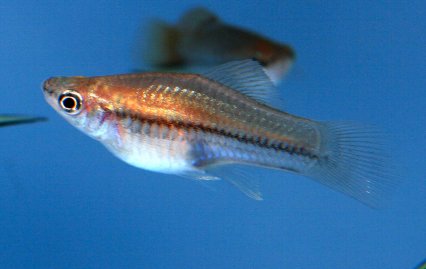 Always keep more females than males, as they are relentless in their reproductive pursuits. Two or more females per male is a minimum, but even then the females should be monitored to ensure they’re not being harassed excessively.

Aside the obvious sword that marks males from females, Swordtail males are endowed with the gonopodium as a primary sexual characteristic. This has a direct role in reproduction — as opposed to the sword which is only there for show.

A male may swing his gonopodium for show, but during copulation will perform a gonopodal thrust, allowing him to deliver packets of spermatozeugmata.

Some Swordtail varieties, especially those with enlarged fins through selective breeding such as Lyretails, are unable to use their gonopodium as it becomes too long to be functional. This is why some fancier strains appear infertile. 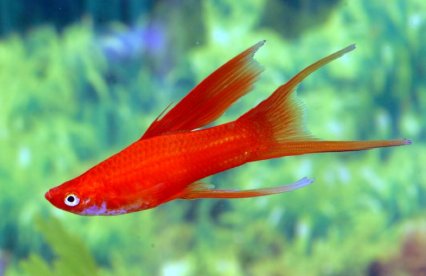 Male swords often bicker and display for dominance over each other, with posturing, erected fins, circling and mouth-to-mouth wrestling.

It has been shown through experiments that, during a conflict, non-participating males actually observe the outcome of fights and use the information gained to assess their own chances of victory.

Losers are therefore then much likelier to be picked on than constant winners! 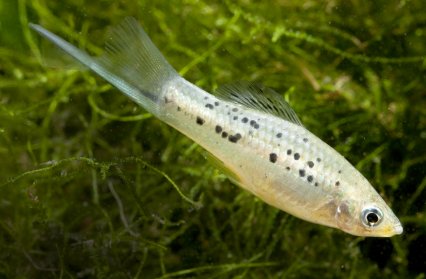 Where sword sizes are concerned, bigger is definitely better in the eyes of females.

Experiments have shown that females are attracted to larger males. However, they struggle to differentiate between a giant male without a sword and a smaller fish with a large sword!

As females seem to perceive it, it appears that the sword makes up part of the overall size of a potential mate.

Given the option between a Swordtail illustrated much larger, say, on a TV screen with its sword edited out, and a smaller male with sword intact, a female will usually opt for the larger fish. Yet, given two fish of same body size and differing swords, the larger sword will always be more attractive.

Ultimately, the decision on who to breed with is the female’s. She may flock to a male, or reject his advances. Spawning with this fish can be considered intersexual, where males vie for the ladies’ interests, rather than intrasexual where males may decide to fight among themselves to earn the right to reproduce.

Females also seem to prefer asymmetrically marked males over those with a more even body plan. They appear critical over looks as well as mass… 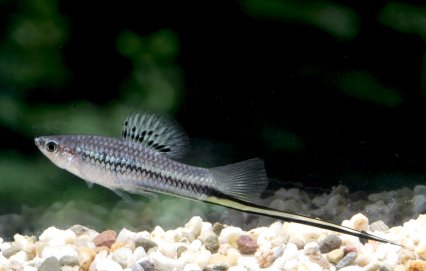 The Montezuma sword was rediscovered in the 1980s after another fish had been found masquerading under its name.

This is probably the most popular of the ‘different’ swordtails, because of its extreme sword growth.

However, they go for high prices and those used to paying £2 a fish may panic when they see a Montezuma offered for more than £15 a pair.

Temperature: They are happy between 20-26°C/68-79°F, but will tolerate a little higher and lower for short periods.

Ratio: Keep one male to two or more females. 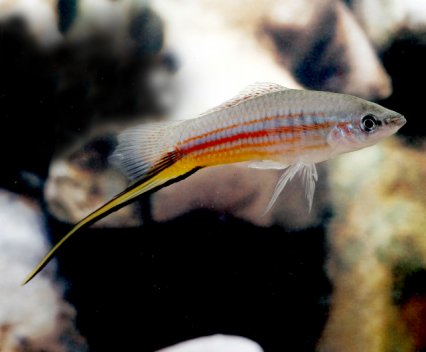 The Chiapas swordtail is a colourful customer, as well as a species you’re unlikely to find unless hunting through livebearer clubs and associations.

Looking similar to some farmed variants, these are an acquired taste, but still have fans.

Ratio: One male to two or three females.