From sluggish to stream - inside of a day! The project: to convert Nathan Hill's established and overgrown planted danio set-up into a fast-flowing riverine tank in one day â€” and what a doddle of a job it was, too!

The danio tank had been set up on the back of an article I wrote on the fish a few months back, when the bug bit and I simply had to have a shoal of them at home.

The aim was to recreate an overgrown expanse of sluggish-stream bank, housing nothing but Danio rerio and Trichogaster lalius. Unlike many previous set-ups, I wanted minimal plant selection, and so opted for fast growing Hygrophila difformis, and stole some Hydrocotyle sp. 'Japan' from another tank in the house. 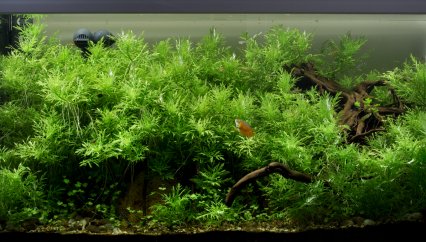 The Hygrophila originated from just five bunches, repeatedly chopped back and replanted as they grew, covering a huge area. From those bunches it only took a couple of months to get a wall of planting on display.

But for all the lush growth, it was time to come out. The danios — now rehoused in a long, wide and shallow tank elsewhere — were stunning to look at, but just too skittish and constantly moving for me to relax to. 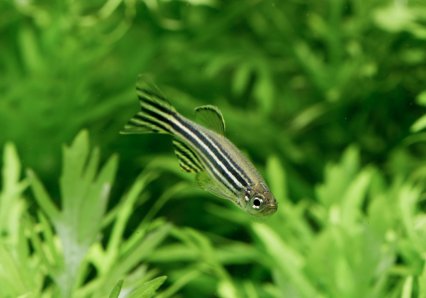 Plus, as beautiful as they were, they lacked the kind of curiosity factor I’ve come to crave in a set-up. Tanks have to be interesting to appeal to me these days, but that’s not to say they have to be overly complex either.

From months of growth, it took about an hour to strip, right down to the last grain of sand. 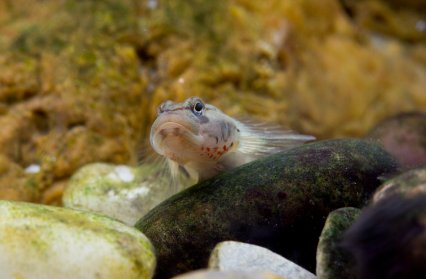 Enter the goby! Specifically, Rhinogobius duospilus, a long-term guilty pleasure of mine, and a fish to which I felt I’ve never had the time to do justice. These rheophilic, benthic fish love to burrow among stones in faster flowing waters, and it was high time I had a stab at making a home for the scamps that they’d truly enjoy…

I’m convinced that there’s something to be said about addressing the way our aquaria flow. It’s come to my attention that every tank I’ve seen has had something very similar in common — it’s a static body of water.

That’s great for a fish from a pond, pool or oxbow lake, but what about the species that aren’t? What about those that see their environment whipping past at metres per second?

Some reef tanks are really embracing the idea of variable flows. They’ve had to in order to succeed with delicate corals. However, for the freshwater aquarist it still tends to be a tank with a singular, smallish flow dribbling in from one end of the tank, barely rustling the leaves of Echinodorus on the way past and then sluggishly making its way up a strainer and back into the filter.

I’ve noted lots of fish trying, and failing, to make the most of a filter outlet. To see loaches having a ten-second dash in front of the nozzle of an internal canister offers just a glimpse of what these fish have evolved to do.

Riverine species have spent millions of years developing all the necessary muscles, hydrodynamics and behavior associated with living in a faster flow, so I say we should give it to them.

A while back we assembled a river manifold system whereby water is pushed from one end of the tank to the other, and then pulled back underneath through a series of pipes hidden under the substrate. I toyed with the idea of making another, but then I thought about the Rhinogobius I was planning on and decided against it.

Instead, I found I still had an old 6,000 lph pump kicking about from another project and that rate will put ample water flow about a moderate sized pond, so I thought I’d give it a whirl.

I used my trusted Fluval Studio 900 tank and as it was some 50cm/20” deep it dawned on me that I could have the pump riding high on the glass so it could blow straight down the top layer, hit the glass, curl down and return up the tank at speed along the bottom. I had a play and it worked a treat.

I opted for a really loose biotope, which turns out to be one of the most basic and yet rewarding tanks I’ve ever put together!

A cobbly bottom with light but not too fine sand gives the effect of a shallow stream, and the cobbles and rocks — in absence of any wood — gives the illusion of an aged, flowing riverbed. Normally, I’d detest algae growth, but here, somehow, it makes the tank look even more natural.

I kept plants simple, opting for a couple of vallis that might be typical representatives of the kind of greenery you’d find in a flowing river. In the wild, such grassy aquatic plants spend more time horizontal than vertical. 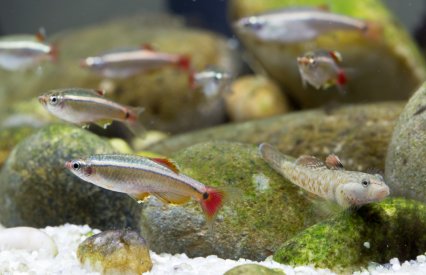 As far as being biotope correct, the set-up falls at the very first hurdle. I’ve chosen to amalgamate two fish that would fail to see eye to eye in the wild – Rhinogobius duospilus and Tanichthys albonubes, more commonly known as the White Cloud Mountain minnow.

However, these fish share their enjoyment of that ever-present flow, as well as a dislike of higher temperatures. In fact, being indoors and running at an ambient 18°C/64°F, I have no need to use a heater on this tank at all!

How I converted my stripped tank into a riverine haven... 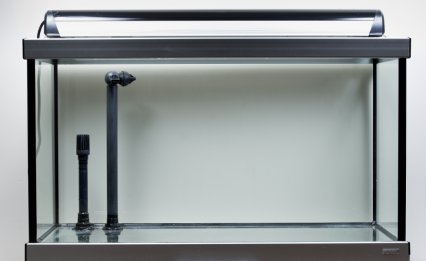 1. The Fluval Studio 900 was stripped entirely and the fish relocated elsewhere. After a clean-up and scale removed it was ready to go. 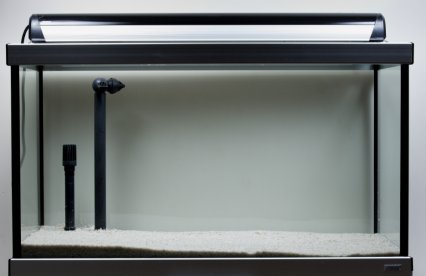 2. The Unipac Maui quartz sand was rinsed thoroughly and added. It sloped towards the flow of water to minimise it being moved by the pumps. 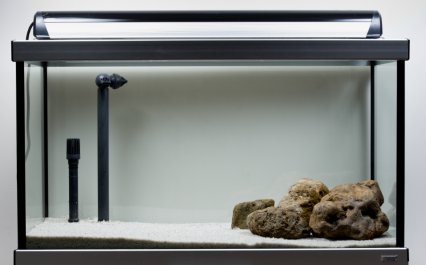 3. Large lumps of rounded petrified wood were added, but sunk deep into the sand. Burrowing gobies can undermine hardscape! 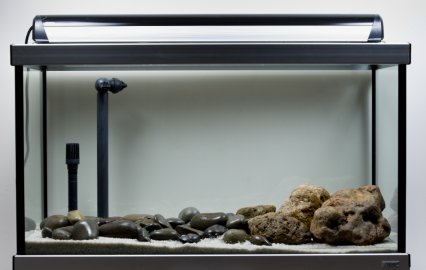 4. One 25kg/55lb sack of river cobbles were thoroughly rinsed and added down the centre line. These will minimise substrate movement. 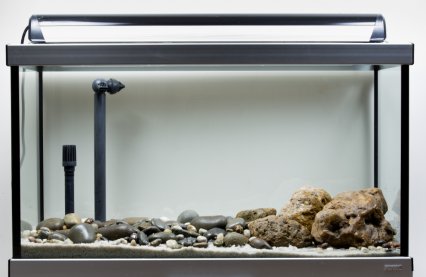 5. A 7.5kg/17lb bag of fine river stones was added to smooth the transition from large rocks to smaller. These also filled gaps and cracks. 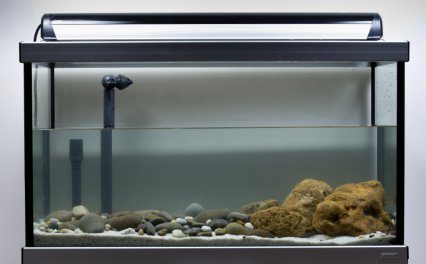 6. As much reclaimed water as possible from the earlier set-up was used and supplemented with dechlorinated tapwater. 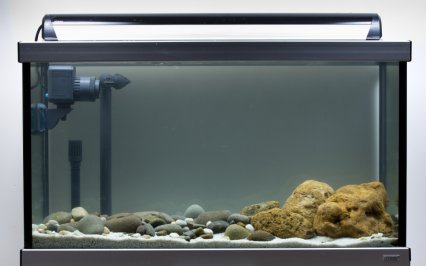 7. The beastly 6,000lph pump was added high up the tank and moved around at various settings until the desired flow was achieved. 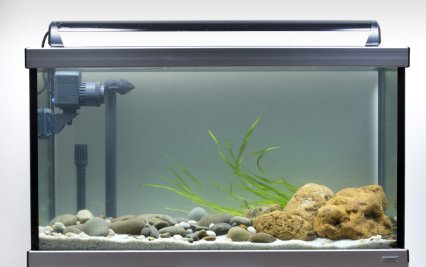 8. Vallisneria was placed in the area of strongest flow and the fish added as the already matured filter was fired up. Conversion complete!