Considering cichlids for your next purchases? Jeremy Gay answers your key questions and suggests there will always be many South Americans that might just fit the bill.

Can I keep a community of South American cichlids?

Yes, but it is best achieved by mixing species that naturally co-exist in the wild and most are medium to large. If the tank is large enough, and we are talking 1.8m/6’ plus, you could mix severums, Satanoperca, chocolate cichlids, angelfish, Uaru and even wild Discus.

Acarichthys heckeli and Biotodoma cupido are mild mannered and would mix with other similarly behaved cichlids.

A small species like Apistogramma is best not mixed as their territory is quite two-dimensional and they need to occupy the tank base. One pair per two square feet of base is the general rule of thumb, meaning only two pairs of dwarfs per 1.2m/4’ tank. You could however add non-substrate dwelling cichlids, like angelfish, above them.

What non-cichlid species should I keep with them?

There is something about South American species that makes many want to keep them in a biotope aquarium, living only with fish they naturally live with in the wild. This makes sense as décor and water chemistry can then be matched to all the inhabitants to make them feel at home.

For small species tetras, Corydoras, hatchetfish and Otocinclus are the obvious choices along with pencilfish and other small, non-aggressive characins.

If you don’t mind where your fish come from rasboras make good alternatives to tetras.

Although physically possible, it is not how the fish prefer to live and they will all end up looking dog-eared and washed out instead of majestic with flowing fins and tail extensions.

Malawi cichlids are known for becoming hyper-dominant and hard to live with if given too much space. Conversely, give South American cichlids more space and they will all get on much better and even breed.

For half the year the habitat of Amazonian cichlids becomes much larger as the flooded river expands through the forest, so they prefer being able to get out of each other’s way and having time on their own to feed and breed.

Which species is easiest to breed?

Of the small species, the Flag cichlid (Laetacara curviceps) is quite easy to breed, forming pairs, laying eggs and then protecting them very well. L. curviceps is much less water parameter dependent than, for example, Apistogramma.

Of the medium-sized species the Blue acara of South and Central America is very prolific once paired off. Severums are quite straightforward and easy too.

Although angelfish and Oscars often lay eggs, angels are known for eating their eggs and Oscars can form all-female pairs and of course, the eggs never hatch. The true Cichlasoma species, and most of the species commonly referred to as Acaras, are also good to attempt to breed. 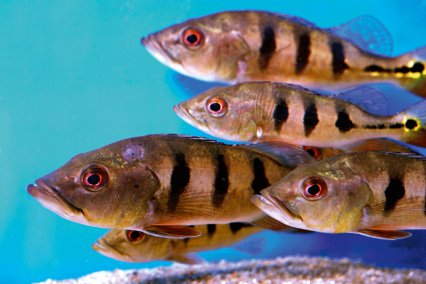 Are there any I should avoid?

Just those for which you will not be able to provide the correct conditions. Peacock bass, (Cichla spp.) which are pictured above, grow huge and need massive tanks or tropical ponds long term. Crenicara never seem to do well in the shops and special care would be needed for the riverine specialists Retroculus and Teleogramma.

South Americans are generally as peaceful as any cichlid can be. Though mostly substrate spawners, all will turn aggressive when protecting their young. Pike cichlids and even Oscars will need a large tank and live for ten years or more, so take those factors into account as large, long-lived fish will need your long-term stable commitment.

Do all South American cichlids come from warm, soft water?

Interestingly not. The Pearl cichlid (Geophagus brasiliensis) is from the east coast and inhabits both cooler and harder, even brackish water. The hump-headed Gymnogeophagus spp. are also known for a preference for cooler, almost temperate water.

Even some Apistogramma don’t like it too hot, so research their requirements before you buy the fish and don’t always assume that South American, or even Amazon, in origin means very warm, acidic black water.

Should I go wild caught or captive bred?

Wild-caught South American fish can provide income for indigenous peoples and encourage conservation of fisheries and the surrounding forests, so don’t rule them out.

There is an obvious parasite and acclimatisation risk with newly-imported wild fish though, so let your retailer or wholesaler clean them up, get them feeding and used to aquarium life before you take them.

Captive-bred will vary from breed by hobbyists local to that store to commercial tank breeders, to farmed fish from South-East Asia. Fish from other hobbyists will have had the most TLC, though they will be related offspring so should not be bred brother/sister.

Wild fish will be genetically diverse.

I’m a rare fish collector. Which are the rarest South American fish?

Until recently the true Parrot cichlid (Hoplarchus psittacus) the second Uaru species (Uaru fernandezyepezi) and the Red wedge severum (Heros sp.’Rotkeil’) were quite unusual and highly priced, though are now bred more frequently by hobbyists.

It seems there will always be a new Apistogramma, as there are so many awaiting discovery and description and a giant called Apistogramma sp. “gigas” is set to cause a stir. Some say it isn’t an apisto either.

Crenicichla sp. 'Xingu III' is stunning and seemingly never available, and the great thing about most South American cichlid families is that new fish are being discovered all the time. Any country considered difficult to collect in, like Colombia for example, may also be hiding some cichlid treasures.